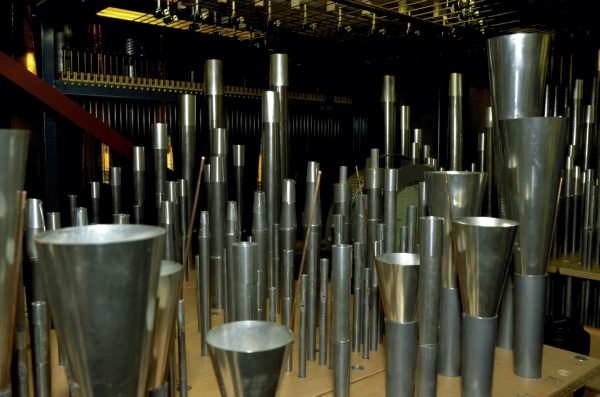 CHINA GROVE — When St. Mark’s Lutheran Church dedicated its new organ three years ago, the congregation was eager to share this gift with the community.

That gift, which included a dramatic sanctuary renovation to accommodate the instrument, was made possible by a bequest from the estate of Harold Menius.

“Harold loved his church,” Cantor Elizabeth Staton wrote in the dedication booklet, “and this gracious gift will bring generations of people closer to God.”

Tomorrow, organist Patrick Pope of Charlotte will present a concert at 4 p.m. at the church, 326 N. Main St., in downtown China Grove.

Pope is organist and director of music at the Episcopal Church of the Holy Comforter in Charlotte. He earned his doctor of music degree in organ performance and literature at the Indiana University Jacobs School of Music, from which he also earned his master’s degree. He has a bachelor’s of music degree in organ performance from the University of South Carolina. A native of Statesville, Pope was assistant organist and choirmaster at St. Peter’s Episcopal Church, Charlotte, from 2006-2008, where he also worked with the Choir School at St. Peter’s.

His teachers have included Todd Wilson, Marilyn Keiser, William Bates, and Christopher Young. While at USC and Indiana, he participated extensively in the choral programs at both schools as a singer and accompanist. As an associate instructor in the Jacobs School of Music, Pope taught applied piano and organ, and assisted in teaching courses in the church music curriculum. He is an adjunct instructor of music at Queens University of Charlotte. Next Sunday, Jan. 24, he will play at St. Patrick’s Cathedral in New York City. He will also play at Grace Episcopal Church on Broadway.

“I’m playing some of the pieces I’ll be playing in New York, so tomorrow’s concert is kind of like a dry run for me,” Pope says.

Pope’s program on Sunday will include “Concerto in G Major” by J.S. Bach, Chorale Variations on “Songs of Thankfulness and Praise” by Johann Pachelbel, “Three Hymn Tune Preludes” by Dale Wood, and “Prelude and Fugue in C Major” by Bach.

“It’s a beautiful organ,” Pope says. “When I did graduate work at Indiana University, there was a Fisk there. They’re wonderful, well-built organs that look and sound beautiful. When China Grove got one, I was overjoyed.”

He continues, “Fisk is one of a handful of craftsmen still practicing this art. It’s an old art. They take great care with their work. The organ will outlast the church building itself.”

C.B. Fisk is based in Gloucester, Mass. Its Opus 144 organ is on the campus of Lenoir-Rhyne University in Hickory, and Opus 145 is being installed at Emmanuel Episcopal Church in Southern Pines.

A reception to meet Pope follows the concert in the church’s fellowship hall.

“We’re always on the lookout for organists to come and play,” she says. “This instrument is such a joy for me to play every Sunday, and we’d love for other musicians to experience that same joy.”