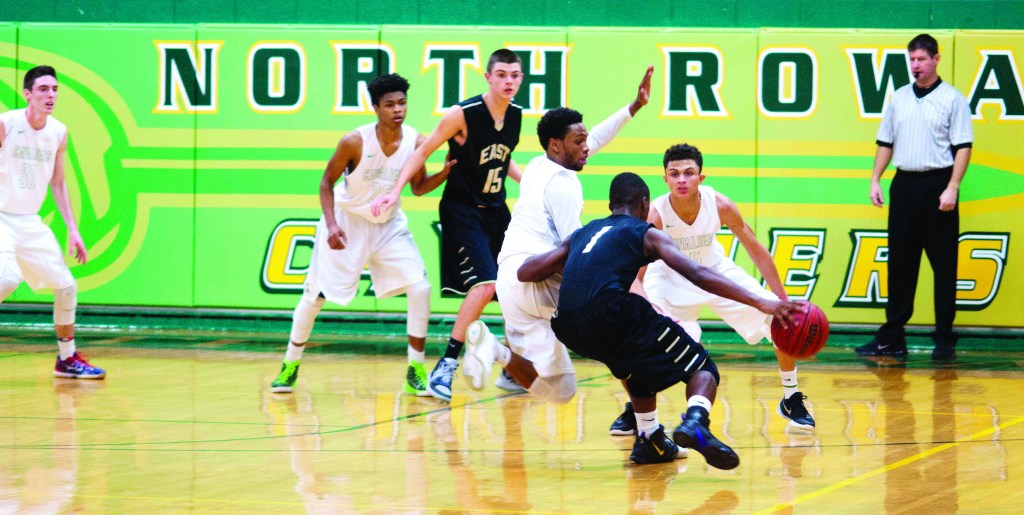 SPENCER — Josh Handy and A.J. Shields watched in street clothes, and Jalen Sanders didn’t enter the action until the second quarter.
North Rowan, obviously, is working through some disciplinary things, not that it affected the bottom line any on Friday night. The Cavaliers still romped, 84-41, against visiting East Davidson in a Central Carolina Conference game played with a running clock for most of the fourth quarter.
North coach Andrew Mitchell said he expects the team to be back at full strength and back to its normal rotation soon.
“With teenagers, you’re working through things all the time,” Mitchell said with a sigh and a shrug. “But you can teach very valuable life lessons with basketball. Hopefully, they’ll learn those lessons now. When they get jobs, they can’t just decide not to show up or they’ll lose their jobs. Some guys have a little time to serve, but once they’ve done their time, it will be over and done with.”
Mitchell said he’s in a lesson-teaching mode because of missed practices.
“Guys missed some practice, and we’ve got other guys who are working hard all the time,” Mitchell said. “Guys who are showing up and working every day should play in front of guys who missed practice. If you’re going to have a strong team, you have to trust everybody on the roster.”
Backup guard Xavier Haley took the most advantage of his additional minutes. He scored 10 points.
“Whenever I get a chance to play, I leave it all on the court,” Haley said. “I was getting some open shots in the flow of the game.”
Alonzo Sirleaf got three quick personal fouls, so North basically played the first 10 minutes with Joseph Scott, Henderson Lentz and a group of guys who don’t usually log a lot of minutes. When Eli Jacobs made a 3-pointer for East Davidson (5-10, 0-3) to close the first quarter, the Golden Eagles trailed, 18-13.
But Haley started the second quarter with two free throws, and Scott swooped in for a stick-bac,. North’s lead had swelled to 24-13 by the time Sanders walked to the scorer’s table.
It took Sanders about five seconds to score, and the rout was on. It was 33-13 three minutes after he took the floor. When Sanders drilled a 3-pointer at the halftime horn, it was 47-22.
“East Davidson has been playing a lot of people tough and they are not a bad team,” Mitchell said. “But we made them look bad tonight because a lot of guys were playing so hard. I was pleased with a lot of people. We talk about protecting your minutes and valuing your minutes, and guys did that tonight.”
North expanded its lead to 69-32 after three quarters. A 3-pointer by Haley as the fourth quarter began, pushed the lead to 40 points and triggered a running clock.
McKeegan Barrett scored 14 points for East Davidson.
Sanders finished with three 3-pointers and 20 points, despite his limited minutes.
“He’s got a pretty nice average, and I’m glad he didn’t damage it,” Mitchell said.
Scott scored 19, including 15 in the first half.
Lentz made three 3-pointers, while Haley made two from long range.
Scott, Joe Harrison, Josh Ellis and Trey Stoner also knocked down 3-pointers as the Cavaliers (13-2, 3-0) stayed unbeaten in the CCC.
“East Davidson plays very hard, and we knew if we slacked off, they had a chance to beat us,” Scott said. “But we didn’t slack off. We played like we were playing against Salisbury or Lexington.”
•••
NOTES: Sanders pushed his career points total to 1,425, third in school history. … Thomasville and Salisbury entered the night tied with the Cavaliers atop the CCC standings, but their game was postponed by a leaky roof.