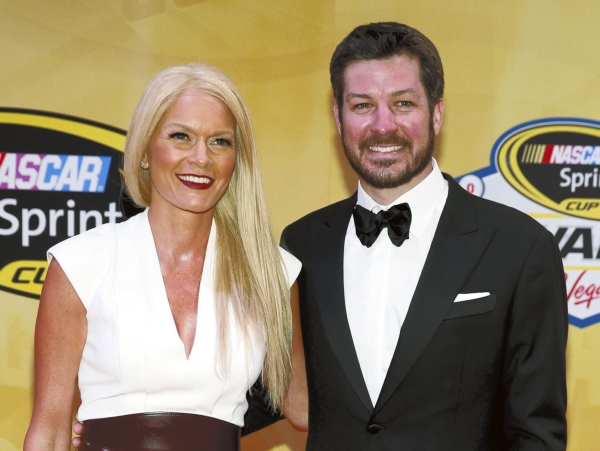 PHILADELPHIA (AP) — Martin Truex Jr. let wide-eyed employees at an NHL arena try on his race helmet. At least one struggled to figure out how to squeeze the helmet on before she posed for a few photos for a keepsake.

Truex had it easy, slipping on a Philadelphia Flyers cap before he met the team and watched warmups from the bench. He even showed off a rare sight in Philly — a championship trophy. Truex toured town with the 2016 Daytona 500 trophy to help promote next month’s season-opening NASCAR race.

“I wouldn’t mind taking this home for good,” Truex said.

Once a stock car poster boy for bad luck, Truex could be considered among a handful of favorites to win “The Great American Race” in a few weeks. Coming off the best season of his career, Truex has found his home at Furniture Row Racing and was one of four drivers racing for the Sprint Cup title in the season finale.

Pollex tweeted a photo on Monday of herself ringing a bell that signaled the end of active treatment and wrote, “After 17 months straight, I’m going to live my life!!!!”

Truex and Pollex, who started dating in 2005, are ready to promote ovarian cancer awareness with what they learned from a grueling fight with the disease.

“She’s going to live her life and enjoy her life,” Truex said. “She had always kind of stayed in the background, but she’s embraced this. She wants to teach other people about what she’s been through. She wants to help a lot of people that are really scared.”

Truex was at the Flyers game Wednesday night after three days in Ohio hunting on a farm he owns with Dale Earnhardt Jr. Truex, Earnhardt and two friends hunt deer and turkeys on the property about an hour outside Columbus, Ohio.

“It’s an exciting thing to envision the future there and how many years we’re going to sit on the front porch and drink beer,” Truex said.

He can get comfortable because of one perk from his sponsorship deal: “We’ve got Furniture Row stuff in our cabin.”

Truex drives the No 78 Toyota for FRR, a single-car operation based in Denver, far outside ofNASCAR’s North Carolina hub, and earned a spot in the Chase for the Sprint Cup championship field. He also earned a spot among the small group Denver’s elite athletes.

The New Jersey native-turned North Carolina resident and part-time Ohio hunter is the Colorado athlete of the year.

Let’s see, Peyton Manning plays in Colorado four months of the year. Colorado Avalanche, Colorado Rockies and Denver Nuggets athletes have dozens of home games every year. Just how many days last year had Truex spent frolicking in the snow-covered mountains, chugging Fat Tires or kayaking the Colorado River to earn this honor?

Maybe a week, at most, was enough time for Mile High Sports magazine to name Truex its pro athlete of the year. It was also enough time for Denver Broncos general manager John Elway to tweet Truex “all the best” before the championship finale.

Truex had never finished better than 11th in the standings, then used a midsummer hot streak to stamp himself a championship contender. He won at Pocono Raceway, boasted eight top-five finishes, led 567 laps — after leading only one in 2014 — and found himself racing against Kyle Busch, Jeff Gordon and Kevin Harvick for the Sprint Cup title at Homestead-Miami Speedway.

Busch won the race and the championship. Truex finished fourth.

Driving a Chevrolet, Truex and FRR were in a business relationship with a Richard Childress Racing program long stuck in neutral. With a manufacturer shift to Toyota and an FRR technical alliance with NASCAR powerhouse Joe Gibbs Racing, Truex is almost a fifth Gibbs driver. Truex and crew chief Cole Pearn can learn from Busch, Denny Hamlin, Matt Kenseth and Carl Edwards. Truex will have a new pit crew formed out of the JGR system.

“It’s a great time to be linked into that group,” Truex said. “They’ve really welcomed Furniture Row Racing and I’ve been really surprised with just how open they’ve been and how much they want to be a part of our program. I think it’s going to make me better.”