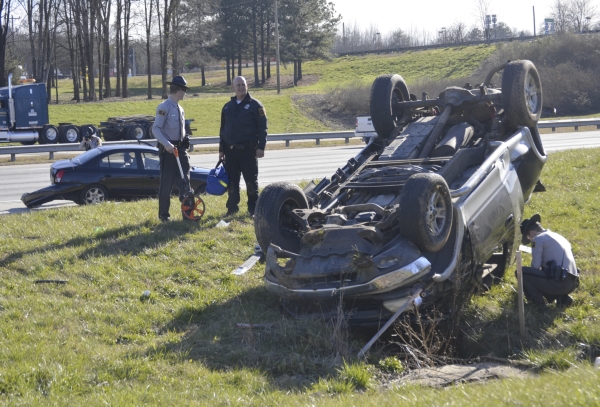 Troopers investigate a two-vehicle crash Thursday at the Peeler Road exit after this pickup collided with the rear of the passenger vehicle. Both vehicles lost control and the pickup overturned. The driver of the truck was thrown from it and was airlifted to Wake Forest Baptist Medical Center. Shavonne Walker/Salisbury Post

A man was killed Thursday after his pickup overturned and he was thrown from it, during a two-vehicle crash on Interstate 85 near the Peeler Road exit ramp.

Johnny Bartlett, 64, of Warsaw, was taken from the scene by ambulance and then transferred to Wake Forest Baptist Medical Center, where he later died.

N.C. Highway Patrol troopers say both drivers were heading southbound and were the only two involved in the crash, which occurred around 2 p.m.

The Ford truck collided with the rear of a Hyundai, causing both drivers to lose control. According to reports, Bartlett veered off the roadway to the right and overturned. The vehicle came to rest on its roof and Bartlett was thrown from the truck.

The identity of the Hyundai driver was not immediately available. The driver, a woman, was seen walking around at the scene.

The crash did not impede traffic as both vehicles were off the roadway.

By Josh Bergeron  josh.bergeron@salisburypost.com The owner of Rowan’s highest-volume animal rescue group is facing criminal charges after being tied to... read more