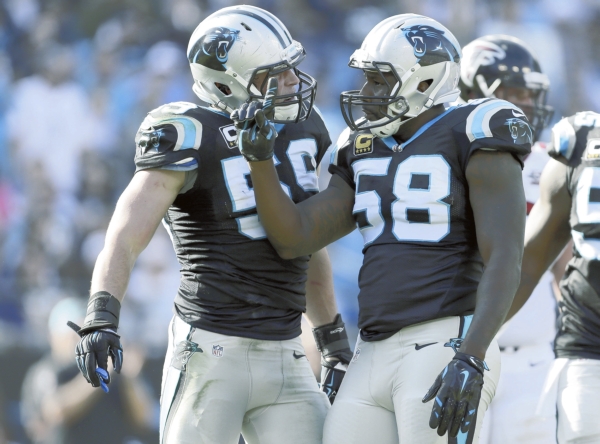 AP Photo/Bob Leverone, File ... In this file photo from the Dec. 13 game against the Atlanta Falcons, Carolina Panthers’ Thomas Davis (58) celebrates after a play with Luke Kuechly (59) in Charlotte. All-Pro linebackers Kuechly and Davis continue to push each other to new heights. Carolina will host Seattle on Sunday in an NFC divisional playoff game at 1 p.m.

CHARLOTTE (AP) — Three days before the NFC divisional playoffs and Carolina Panthers All-Pro linebackers Luke Kuechly and Thomas Davis were in a heated competition before practice.

They were seeing who is better at throwing the football underhand on Thursday.

There isn’t much the two former first-round draft picks don’t compete at, and it seems to be working.

“Whatever kind of competition you can think of, we have probably done it,” Davis said. “But we try to have fun with it. It’s a competitive, fun thing. We just try to push each other to be the best players we can be.”

Since Kuechly joined the Panthers in 2012, Carolina is 41-22-1 and has won three NFC South titles. The Panthers (15-1) are the No. 1 seed in the NFC entering Sunday’s game against the Seattle Seahawks.

Both players have become fan favorites.

Davis, last year’s Walter Payton Man of the Year, is in his 11th season with Carolina — the longest tenured player on the roster — and earned respect by becoming the first player in league history to overcome three torn ACLs to the same knee.

Kuechly has that humble, nice guy image — Cam Newton refers to him as “Captain America,” joking he can do no wrong. But Kuechly is tough and talented; he was named the NFL Defensive Player of the Year in 2013.

They are, as rookie linebacker Shaq Thompson said, “the very heart and soul of the defense.”

Davis, 32, views the 24-year-old Kuechly as his little brother.

It’s been that way since Kuechly arrived four years ago as the 11th overall pick. He recalls Davis walking into the linebackers’ room, putting his arm around him, giving him his phone number and saying, “As long as you work hard, I’m going to be here to help you out.”

Panthers coach Ron Rivera, who played linebacker for nine seasons with the Chicago Bears, believes they are the league’s best linebacker tandem.

“Luke has one of the best first steps I’ve ever seen,” Rivera said. “Right or wrong, he gets going in the right direction. He really is all about football. And TD has got tremendous athletic ability. He’s probably the best athlete I’ve ever seen play the position.”

San Francisco 49ers coach Chip Kelly said earlier this season he’s impressed Kuechly and Davis never come off the field, saying, “They can cover tight ends, they can cover running backs and then they can run sideline-to-sideline.”

“The best thing about Thomas is he doesn’t care about himself,” Kuechly said.

Kuechly points to a game against the Tennessee Titans where Davis went without a tackle, but did all the important things that go unnoticed by most fans like remaining in his gap to make plays — although few came his way that day.

Davis walked away smiling anyway after the 27-10 win.

“That is one thing I try to emulate about him — do your job and trust the others around you,” Kuechly said.

But there is always that friendly competition lurking beneath the surface, pushing the duo to be their best individually.

Davis declared himself the winner in Thursday’s underhand football toss.

He also teased Kuechly most of the season about having fewer tackles than him — knowing full well that Kuechly had missed three games with a concussion. Kuechly said at the time, “I know, I have to step up my game. We have a competition.”

Kuechly stormed back to finish the regular season with 118 tackles to Davis’ 105.

Both had four interceptions, but Davis can boast he forced more fumbles (4) and sacks (5.5).

In the end though, it’s not about stats with this duo.

“My goal isn’t to lead the league in tackles,” said Kuechly, who has done that twice. “… You get in trouble worrying about getting tackles and getting stuff for yourself. I learned that unselfishness from Thomas — and that’s something I’ve held on to.”

Davis said it’s what makes the Panthers defense so tough.

“You have two of most unselfish guys you will ever have on a football team,” he said. “We totally get that it’s not about us. It’s all for the greater good of the football team. It’s all about raising our level of play of everyone around us. Here, it’s bigger than one man.”