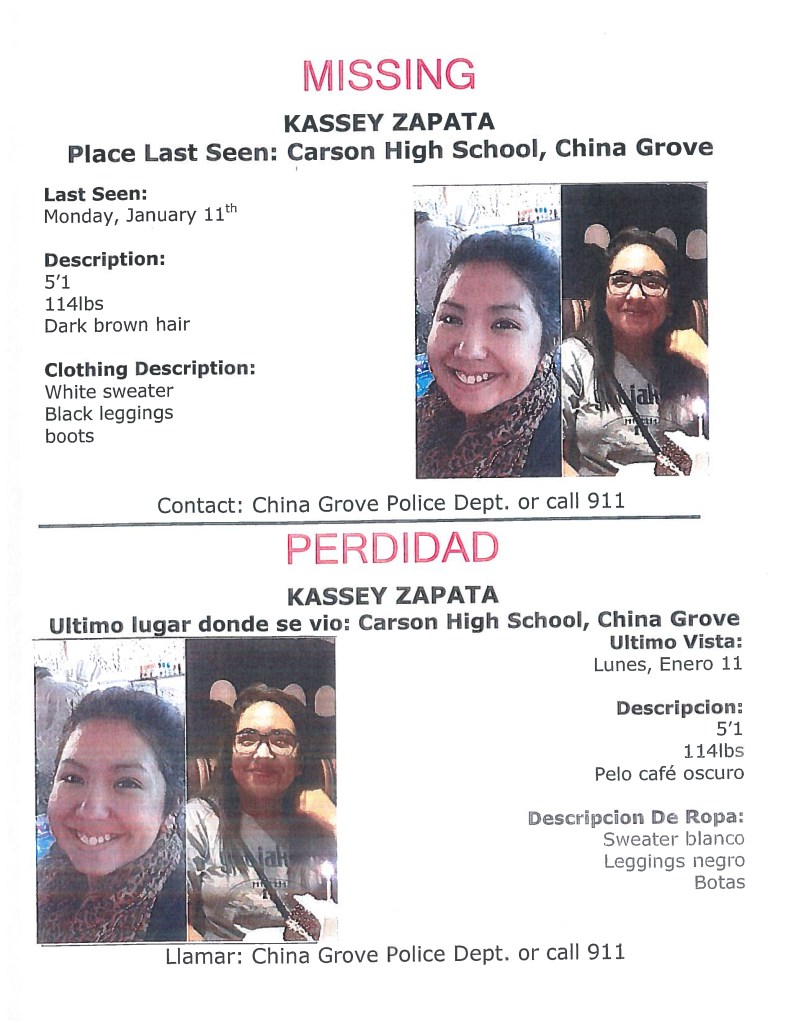 Update 1/15: The runaway juvenile has been found.  Police have charged 18-year-old Erick Jose Santos, of Salisbury, with contributing to the delinquency of a minor.  The investigation is continuing.

Santos was charged on Friday by the China Grove Police Department with contributing to the delinquency of a juvenile and possession of marijuana.

The China Grove Police Department is seeking help in finding Kassey Zapata. She was last seen at Carson High School on Monday, Jan. 11.

Kassey’s family says they believe she is with someone older and fear she’s being held against her will.

Her stepmother, Kristen Godair Zapata, said Kassey (pronounced Kay-See) last spoke to some friends on Tuesday, but they have not heard from her.

“I don’t really know what to do. It’s just a matter of knowing she’s safe,” Kristen said.

She was last seen wearing a white sweater, black leggings and boots. She may also be carrying her backpack, a black Victoria’s Secret bag with pink and green floral print. Kassey also wears glasses, but has been known to take them off.

Her stepmother says she does not have any visible scars or other distinguishable traits, but her ears are pierced.

Kassey did leave school last Thursday and was missing for about two to three hours. She was located at a friend’s house.

The family says they have no reason to believe Kassey was being bullied or had issues at school. They don’t know why she left.

“I can’t imagine what’s going in her mind,” Kristen said.

Pastor Bill Godair, Kristen’s father, said they plan to pass out fliers and search door-to-door on Saturday. Anyone who wants to help distribute fliers can meet at Cornerstone Church, 315 Webb Road, beginning at 9 a.m.

Godair said the family is very grateful to the China Grove Police Department who have tirelessly been searching for Kassey since she was reported missing.

“She is missing on her own accord, but based on the age and prior involvement with her, we need to locate her,” Kluttz said.

Kassey has been seen in Rowan County, Kluttz said.