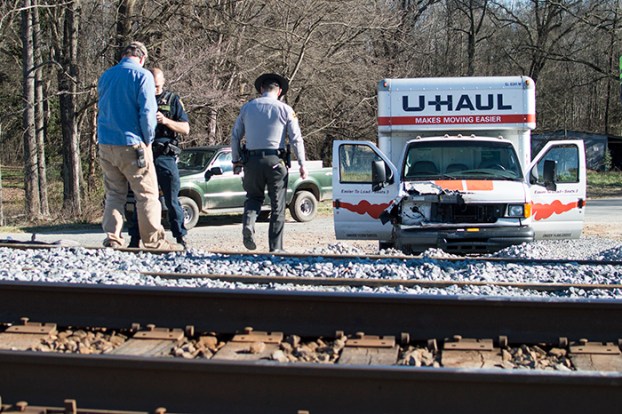 Josh Bergeron / Salisbury Post - One man was arrested Wednesday afternoon after allegedly fleeing an accident in Rockwell and being struck by a train near China Grove. He was allegedly driving while drunk.

A Thomasville man on Wednesday was charged with driving while intoxicated after being involved in two collisions in different Rowan County towns.

Christopher Boles, of Thomasville, allegedly fled the scene of an accident on U.S. 52 in Rockwell before being involved in a collision with a train near China Grove. No one was injured in either accident.

While at the scene of the China Grove accident, State Trooper Robert Charubini said Boles would be charged with driving while intoxicated, having an open container of alcohol in the vehicle and reckless driving.

When emergency responders arrived at the China Grove scene, Boles’ vehicle, a U-haul truck, was sitting on a gravel embankment next to railroad tracks. A passing train ripped off a significant portion of the U-haul truck’s grille.

Charubini said Boles attempted to cross railroad tracks from an I-85 service road to Ethel Lane. There was no designated railroad crossing at the site of the accident, which is behind Johnson’s Restaurant. Because of ongoing railroad construction in the area, the crossing had been ripped up, leaving only the gravel hill and railroad tracks.

Boles told state troopers he was driving from Greensboro.

Joy Hamilton won’t let go of Christmas — at least not until Jan. 15

SALISBURY — How do you say it politely without hurting Joy Hamilton’s feelings? Doesn’t she realize Christmas is over? It’s... read more