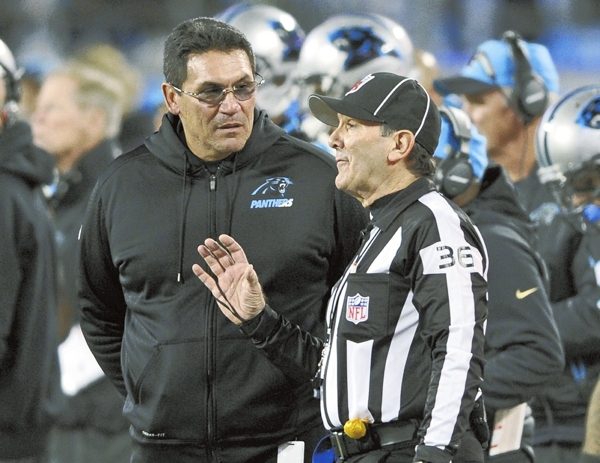 CHARLOTTE (AP) — While Ron Rivera is a coach of the year candidate for the second time in three seasons after leading the Panthers to an NFL-best 15-1 record, his footing in Carolina wasn’t always solid.

Rivera has survived — and succeeded — while other NFL head coaches who struggled with early losses met abrupt termination.

Six games into Rivera’s second season in Carolina, team owner Jerry Richardson fired longtime general manager Marty Hurney after a 1-5 start and called Rivera into his office. He told him the Panthers need to be “trending upward,” but assured Rivera he wouldn’t make any decisions on his future until they met after the season.

The Panthers went 6-4 the rest of the way in 2012, including four straight wins to close the season and finished with a 7-9 record.

Even after the Panthers started 1-3 in 2013, Richardson remained patient.

Rivera eventually found his groove, coaching more aggressively and earning the nickname “Riverboat Ron” for his penchant for taking risks on fourth down.

This year they started 14-0 and will host Seattle on Sunday as the NFC’s No. 1 seed.

“Nobody wants to be on the hot seat —and I’m not a big fan of that term,” Rivera told The Associated Press. “But I will say this: What gave me confidence more than anything else is Mr. Richardson telling me, ‘I will never make a decision in the middle of the season. This is too important.’”

And while he would still spend most of the 2012 season — and some of early 2013 — answering questions about his job security, Rivera knew in the back of his mind that he had time to find a solution.

“For him to tell me not to worry, just to work — man, that took a lot of pressure off,” Rivera said.

Rivera is 33-10-1 in his last 44 regular season games and nobody is talking about his long-term future anymore. He got a three-year contract extension in 2014.

Not every NFL owner has been so patient.

Three of the seven NFL coaches hired in 2014 have already been fired. Hue Jackson became the Cleveland Browns’ ninth coach in 18 seasons after parting ways with Mike Pettine after just two seasons.

In today’s win-now world it’s almost unfathomable how Tom Landry survived as long as he did. The Hall of Fame coach started his tenure in Dallas with six straight losing seasons before taking the Cowboys to the playoffs 17 of the next 18 seasons.

They would meet regularly to discuss some of the things he needed to do to improve on as a coach. He even set Rivera up to meet with longtime friend, coach John Madden.

“I think he felt the responsibility because he OK’d my hiring and he wanted to see me succeed,” Rivera said.

He’s also spoken with and learned from other successful coaches as well. On Saturday, he met with Duke coach Mike Krzyzewski after watching the Blue Devils play at Cameron Indoor Stadium. After their conversation, Rivera stepped outside the room and began writing down everything he could remember Krzyzewski telling him.

Rivera said based on what he now knows, his biggest advice to first-time NFL coaches is to hire a former head coach as a consultant.

“It’s funny, you think you’re ready to be a head coach — you really do — and you have a book, and all of this stuff that is there to help you, but the truth of the matter is until you have done it and sat in that chair you don’t realize how hard it is,” Rivera said. “Some crazy things come up.”

Rivera has turned to his military roots to help deal with various scenarios.

He’s brought in admirals, colonels and sergeant majors to speak to his players and staff. He said they told him about a study the military conducted in which it takes five to seven years to change a culture.

“It doesn’t happen overnight,” Rivera said. “Whether it’s fair or not that a coach gets two years or not, the thing that we all need to do is take a step back and look.”

Rivera has benefited from working for an owner who looked beyond where his team was at, and believed in where it was going.