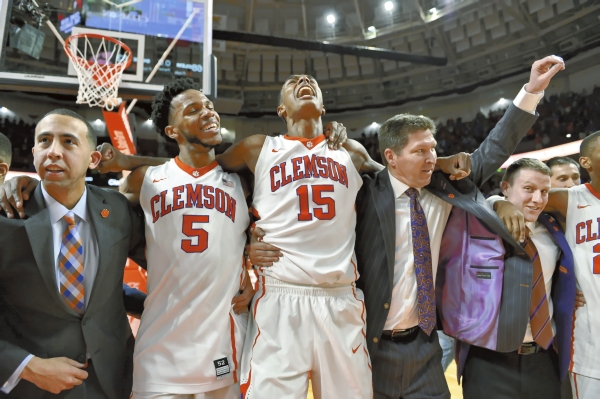 GREENVILLE, S.C. (AP) — Duke’s young players usually play a lot older than they are. Not this time, and it cost the ninth-ranked Blue Devils against feisty Clemson.

“We played against a very good team but we played young today,” Duke freshman Brandon Ingram said. “We didn’t execute well in the end.”

The Blue Devils suffered early foul problems and lack the bench support to bail them out, coach Mike Krzyzewski said, especially with Amile Jefferson out for an eighth straight game with a fractured right foot.

Ingram got three fouls in the opening half. Reserve Chase Jeter did, too. Both were much less effective in the second half, and the Tigers rallied to a 68-63 victory Wednesday night.

“We didn’t execute well in the end,” Ingram said.

Jeter fouled out, and although Ingram did not, he scored just one of his 16 points in the second half.

Grayson Allen led Duke (14-3, 3-1 Atlantic Coast Conference) with 17 points, which was three off his average.

Krzyzewski said there’s little he can do about the rotation, especially with Jefferson injured.

“We’ve been doing a good job, but it hits you,” Krzyzewski said.

This one began like a typical Blue Devils blowout, with Duke taking a 28-16 lead midway through the opening half. Instead, the Tigers hung tough to beat Duke for the second time in three seasons.

The key to the game, Krzyzewski thought, came near the end of the opening half when Derryck Thornton missed a 3-pointer and Ingram picked up his third foul scrambling for the rebound.

Blossomgame hit both foul shots to cut the lead to 35-33 at the break.

Krzyzewski thought his team’s aggressiveness, including Ingram’s, slackened because of the foul problems.

Jones was fouled while making a layup that pulled Duke within 62-61 with 1:44 left, but he couldn’t complete the three-point play to tie it.

Duke: It was just the third time this season the Blue Devils were held to 35 points or fewer in the opening half. They lost two of the other three times, first to Kentucky and then Utah. … Duke entered leading the ACC with almost six blocks a game. It had just one against the Tigers.

Clemson: Blossomgame surpassed the 800-point mark for his career with his 17 points in the win over Louisville last Sunday. … The victory over the Cardinals was the 100th for coach Brad Brownell with the Tigers.

Duke got positive news on Amile Jefferson’s foot injury, but Krzyzewski still cautioned it will be some time before he returns to the lineup. The coach said Jefferson’s right foot fracture was healing well and he could soon get out of the walking boot. “But he can’t play basketball. So it’s a while,” Krzyzewski said.

The Tigers looked lost last month when they fell to three Southeastern Conference teams in Alabama, South Carolina and Georgia and seemed like they’d struggle in ACC play. But Nnoko called a player’s only meeting before the holiday break that seems to have galvanized Clemson. “Landry Nnoko’s been a big part of our voice,” Clemson coach Brad Brownell said. “He’s a voice of reason and a voice of consistency.”

Clemson hosts No. 8 Miami on Saturday.