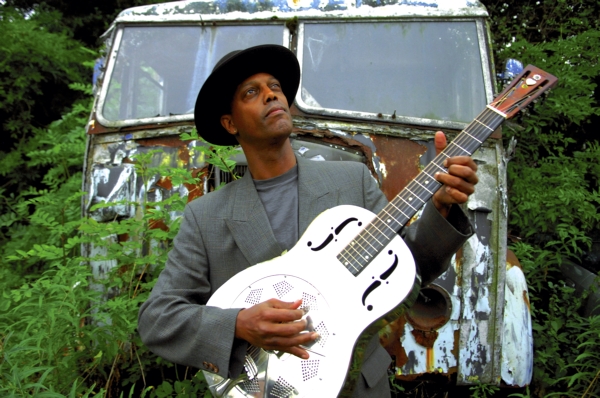 CONCORD — The Davis Theatre’s flagship series, On Stage at the Davis, welcomes the blues with Eric Bibb on Saturday, Jan. 16, at 8 p.m.

A four-decade career, 35 albums, countless radio and television shows and non-stop touring have given blues guitar master Eric Bibb a world view that’s tempered by curiosity and compassion, and the ability to see himself in other peoples’ shoes. He has toured all over the world and been nominated for a Grammy as well as four Blues Music Awards. See www.EricBibb.com for more.

PPT announces cast of ‘The Taming of the Shrew’

“The Taming of the Shrew” tells the story of the courtship of Petruchio and Katherina, the headstrong, stubborn shrew.

Initially, Katherina is an unwilling participant in the relationship, but Petruchio tempers her with various sychological torments — the “taming” — until she becomes a compliant and obedient bride. This hysterical play also features a competition between the suitors of Katherina’s more desirable sister, Bianca. “Taming” has been adapted numerous times for stage, screen, opera, and musical theatre; perhaps the most famous adaptations being Cole Porter’s “Kiss Me, Kate,” and the 1967 film of the same name starring Elizabeth Taylor and Richard Burton.

Whether the tool is musical comedy, drama presentations, or speaking engagements, McGee’s goal is always to create a positive and memorable encounter that can help us all deal with the challenges of life. He is the three-time Comedian of the Year with Inspirational Country Music Association and serves as a Motor Sports Chaplain. He’s been performing for more than 18 years, including shows at NASCAR and NHRA events, and has worked with Lee Greenwood, Charlie Daniels and Ricky Skaggs.

McGee uses humor and costuming to portray Biblical characters, appropriate for audiences of all ages. Each of the three events will be a different presentation. A love offering will be received to defray McGee’s costs. The shows are atLyerly Evangelical Church, 1320 Crescent Road, 704-279-5152.

The 28th Regiment North Carolina Infantry Reactivated will hold its annual regimental meeting at the Rowan Museum at 202 N Main St., on Saturday, Jan. 16 from 8:30 a.m. until noon. Anyone interested in becoming an associate member or Military member in one of the most active organizations in reenacting is encouraged to attend.

At the conclusion of the Regimental meeting, and in conjunction with the Rowan Museum, the 28th NCT will sponsor at 1 p.m. a Civil War Seminar, “Beyond the Battlefield,” in the Messinger Room at the Rowan Museum.

The seminar will address several North Carolina Regiments’ involvement during the battles of the American Civil War and highlight the Tarheel soldiers and officers of those glorious Regiments by two well known authors.

An informative session will also focus on relics and relic hunting in the surrounding North Carolina Bentonville Battlefield areas, along with an extensive presentation of the critical wartime participation of British volunteer soldiers who served in the Confederate Army. The conference concludes with a military drill of arms commands, formations and instruction by the 28th Regiment North Carolina Infantry Reactivated.

Guest speakers for “Beyond the Battlefield” include: Lee W Sherrill, author of “The 21st North Carolina Infantry: A Civil War History, with a Roster of Officers.” The 21st North Carolina Troops (11th North Carolina Volunteers) was one of only two Tar Heel Confederate regiments that in 1865 could boast “From Manassas to Appomattox.” The 21st was the only NC regiment with Stonewall Jackson during his 1862 Valley Campaign and remained with the same division throughout the war. Terry Teff, a resident of New London, is the well known author of “North Carolina Civil War Buttons,” one of the most extensive books ever written on the topic. Teff is an avid relic hunter and well known through the southeast for his extensive knowledge surrounding Civil War weaponry, buttons, accoutrements and uniforms. Michael Hardy is one of North Carolina’s leading independent scholars of Civil War and Southern Appalachian history. The author of twenty books, Michael was honored as the North Carolina Historian of the Year by the NC Society of Historians in 2010 and received the 2012 Alice Parker Award for Outstanding Literature and Arts from his alma mater, the University of Alabama. Matthew Locke, born outside London, England, will focus on England’s contribution and involvement in the Civil War. Matthew relocated to Charleston, S.C. in 2001 to further his education. Locke has a strong passion of history surrounding the American Civil War and has completed extensive research on England’s Blockade runners. He is an officer with Harts Battery of S.C., an Artillery Reenacting organization, a member of the SCV, the Palmetto Guard of Charleston and the Charleston Long Rifle Club.

There also will be a display and signing session where books authored by several of the presenters will be available for purchase. There is no fee for attending the seminar, but attendees are encouraged to make a donation to the Rowan Museum while there. For more information regarding the Symposium, contact http://28thnct.org/ or e mail sharris3@carolina.rr.com

Horizons Unlimited hosts Parents’ Night Out: ‘Twilight at the Museum’

On Saturday night, Jan. 16 from 6-9 p.m., Horizons Unlimited hosts Parents’ Night Out: ‘Twilight at the Museum.’

The cost is $10/child. Preregistration is required. Check availability at www.rss.k12.nc.us/horizons-unlimited-margaret-c-woodson-planetarium

Coming Feb. 20: Amateur Astronomer Night and live sky with telescopes. Free to everyone. Rain plan is in place. Horizons Unlimited is located at 1636 Parkview Circle. Park and enter from Lilly Ave.

CONCORD — Concord’S  Spring into Arts Festival is accepting applications for the 2016 juried art show and festival to take place May 14. First entry deadline with discount is Jan. 31. Applications are available at www. concorddowntown.com or 704-784-4208.

CHARLOTTE — Hart Witzen is accepting submissions for SHOWDOWN 2016, a group exhibit to take place on March 5. Deadline for submission is Friday, Feb. 5. All artists welcome to apply: paintings, drawings, sculpture, photography, installations, mixed and new media. Work does not have to be for sale. There is no submission fee. Artists selected to participate will contribute a fee of $75. Cash awards are $1500, $500 and $250. Artists may submit original, recent work (within 2 years). For consideration send up to three images via email to hartwitzengallery@hotmail.com with SHOWDOWN in the subject line.