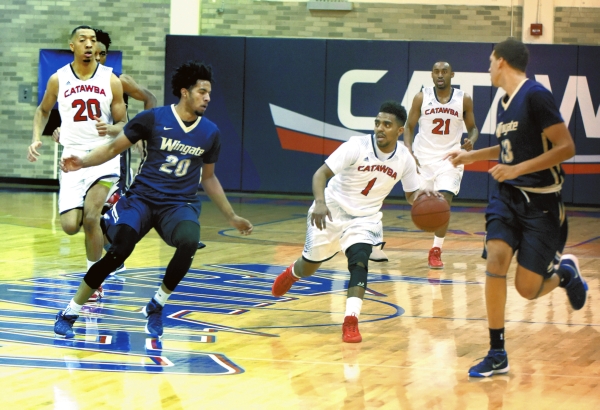 Wayne Hinshaw/for the Salisbury Post ... Catawba’s Ben Sealey (1) dribbles the basketball past halfcourt, as the Wingate defense picks him up.

SALISBURY — Usually as upbeat as a game-show host, Catawba sophomore Jerrin Morrison was down in the dumps after the Indians lost painfully, 59-58, to South Atlantic Conference rival Wingate on Wednesday night at Goodman Gym.
“That was a hard loss right there, and I hate I had a turnover late in the game that hurt us,” Morrison said. “We should’ve attacked harder. If we win that game, we’re in third place.”
Instead Catawba (7-8, 5-4) is tied for fourth in the SAC, with first-place Lincoln Memorial looming on deck on Saturday.
Catawba’s Rakeen Brown drilled a long 3-pointer with one second left to make it a one-point margin of victory for the Bulldogs. Catawba called a timeout after Brown’s bucket but didn’t have one left. That resulted in a technical foul. Wingate missed the technical free throw, but when the Bulldogs successfully got the ball inbounds, the game was over.
Wingate has won 11 of its last 12 meetings with Catawba.
There were a lot of reasons Catawba didn’t break its jinx against the Bulldogs (11-4, 7-2). The biggest was shooting only six free throws to Wingate’s 18.
“I can’t ever remember us shooting six free throws in a game,” Catawba coach Rob Perron said. “But we did some good things. We shot 50 percent from the 3-point line (7-for-14) and we out-rebounded one of the best rebounding teams in our league.”
Wingate wins with defense and leads the SAC in field-goal percentage defense. Not only could Catawba not get to the foul line, it couldn’t finish shots in the paint. Catawba shot just 33 percent on 2-point attempts. Catawba’s big guns — Jameel Taylor and Morrison — were 6-for-21 on 2-point tries. Almost all of those attempts were heavily contested 10-footers.
“You’d beat one guy to get to the lane and then two more guys were there,” Morrison said. “Wingate is good at team defense. They’re always talking, always communicating. We just didn’t get many easy shots.”
Catawba managed just 11 points in the first 13 minutes of play against that ferocious defense and dug a 22-11 hole.
“We were moving the ball, but we weren’t moving it quickly enough,” Perron said. “Defensively, we made mistakes. Twice we doubled a post man who wasn’t in scoring position and let (Mike) Baez have open 3-point looks. That gave Wingate some confidence.”
Jeremy McLaughlin, a freshman post, provided a spark off the bench late in the first half. He produced energy and stick-backs, and Catawba was able to claw back to a 29-22 deficit at halftime.
Wingate enjoyed another burst at the start of the second half, and Perron had to burn timeouts. With 15:13 remaining, the Bulldogs had their biggest lead at 38-24.
“We had to fight from behind all night,” Morrison said with a sigh.
He did some of the fighting. Quiet all night, Morrison suddenly made two 3-pointers 50 seconds apart. Then Brown got a 3-pointer to fall, and Wingate’s lead was down to 41-37 with 11:21 remaining.
Wingate, which won its fourth straight, missed two one-and-ones that helped keep the door open for a Catawba comeback, but Josh Dominguez hit a large 3-pointer from the right corner for the Bulldogs with 2:39 remaining off a drive and kick by Xavier Griffin. That shot gave Wingate a 53-48 lead.
McLaughlin scored for Catawba to make it 53-50 with 2:07 left, and then Wingate had the game’s most critical trip down the floor. Twice the Bulldogs missed. Both times they grabbed offensive rebounds. Zeriq Lolar swooped in for one from the weakside, and 6-foot-9 Keith Griffin out-fought the Indians in the lane for the next one.
With the clock down to 56 seconds, Isiah Cureton made a free throw for a 54-50 Wingate lead.
“We didn’t panic, but those two offensive rebounds allowed them to take the clock from over two minutes down to under a minute,” Perron said.
A high-rising, deep 3-pointer by Morrison with 42 seconds left made it a one-point game, but Xavier Griffin’s hard-nosed layup put the Bulldogs ahead, 56-53, with 15 seconds left.
That’s when the turnover that had Morrison shaking his head occurred. He dribbled the ball off teammate Troy Warren’s foot.
Cureton made two free throws with 10 seconds left to make it 58-53. Brown answered with an uncontested layup for the Indians, and then Xavier Griffin made one free throw with five seconds for a 59-55 Wingate lead.
All Brown’s late 3-pointer could do was pull the Indians within a single point.
“We only had one guy who had a good game tonight (McLaughlin), and we had some other guys who played well at times,” Perron said. “We still had a chance against a ranked team in our region. That’s encouraging, but at the same time, it’s discouraging.”