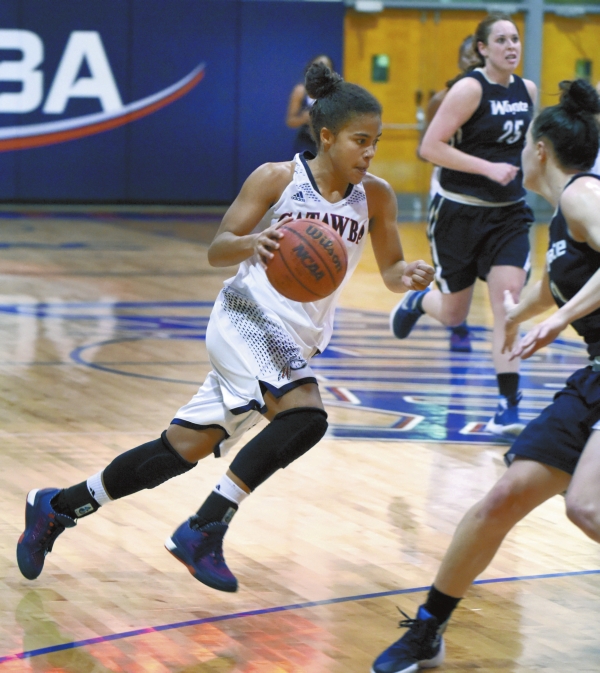 Wayne Hinshaw/for the Salisbury Post ... Catawba forward Bri Johnson drives toward the lane during Wednesday night’s 73-69 victory over Wingate at Goodman Gym. Johnson led all scorers in the game with 18 points.

The Indians aren’t likely to shout it from the roof tops, but their 73-69 win over visiting Wingate on Wednesday was their third straight and moved them into striking distance in the congested league standings.

“It says Catawba is back on the map,” junior Bri Johnson said after Catawba (7-8, 4-5) opened a three-game homestand with an exciting triumph. “It says we’re a team to be reckoned with.”

Winning coach Angie Morton earned her 200th career victory at Catawba and did it in style — yelling “Wingate” into the the Indians’ post-game locker room.

“Oh my, this was a great win,” she said. “Now we’re back on a roll. We’ve won three straight and we’re starting to knock off (teams) that are in front of us. It came down to making a couple of good defensive stops and then we got to the free throw line right when it was most important.”

In a back-and-forth game that saw 20 lead changes, Catawba went ahead for keeps when second-semester addition Jada Huntley knocked down a 3-pointer from deep in the left corner, snapping a 68-68 tie with 1:03 remaining.

“If you’re wide open, shoot it,” the junior forward said after contributing 16 points, five rebounds and three steals in 19 minutes off Catawba’s bench. “You have to have confidence to take that shot — and I was confident. That’s just playing basketball.”

Johnson paced the Indians with 18 points while teammate Terri Rogers, the reigning SAC Player of the Week, had 10 points and five rebounds despite spending much of the first half chained to the bench with foul trouble. “We’re a different team without her,” Huntley said. “You need someone to rebound and get open in the post.”

Instead, Catawba turned the first half into a long-distance celebration. The Indians shot 58 percent from the field (18-for-31), buried seven 3-pointers and took a 48-44 halftime lead. In the second half, Wingate (9-4, 6-3) switched from a man-to-man to a 1-3-1 and limited Catawba to eight field goals.

“Coach (Ann Hancock) came in and asked if we wanted to change to a 1-3-1,” Wingate junior Shelby Trycoli said after the Bulldogs had their six-game winning streak snapped. “We said sure. It gives you more coverage on the drive and takes away some of that three-point shooting.”

Catawba lost and regained the lead a couple of times in the third quarter and led, 61-57, when senior Emma Ucinski drained a three from the right corner late in the period. Wingate went back ahead, 66-65, following two layups by guard Amber Neely — the first when she accelerated down the lane on a Linda Ronstadt, blew-by-you dribble-drive and again when she turned a one-handed steal in Catawba’s front-court into a runaway lay-in.

“It was free basketball,” said Johnson. “In the end we weren’t thinking. We just had to let the game come to us.”

It finally did after Huntley, playing in just her fifth game, connected from right in front of Catawba’s bench. “Jada is just now finding her groove,” Morton said. “What she mostly gives us is rebounding. She can rebound like no other.”

Rogers and Huntley provided the gift of closure with last minute free throws, sending the Indians away with an unexpected victory. “They’re not a team you can sleep on,” Trycoli said afterward. “They’ve got some good shooters.”

And now they’ve got a fighting chance.

By Mike London mike.london@salisburypost.com Jerry Sands plans to head to Glendale, Ariz., on Feb. 10. That’s 13 days before the... read more