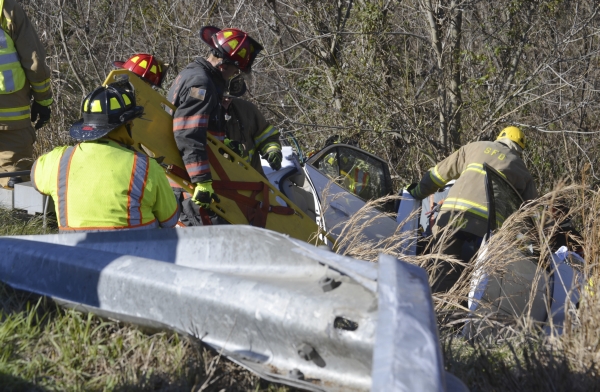 Rescuers work to free Ty Mauldin, 24, from his vehicle Tuesday morning after he said his steering wheel malfunctioned when he tried to merge into another lane. Mauldin crashed through this guard rail and ended up down this embankment in the 76000 block of Interstate 85, southbound between the Spencer and Salisbury exits. Shavonne Walker/Salisbury Post

It’s likely that a steering mechanism failure led to a single-vehicle crash Tuesday morning on the southbound side of Interstate 85 between the exits for Salisbury and Spencer, N.C. Highway Patrol officials said.

Ty Mauldin, 24, of Winston-Salem told a N.C. Highway Patrol trooper he was in the middle lane, tried to merge to the right, and the steering wheel malfunctioned, sending him farther into the right lane.

His Chevrolet Malibu continued through a guard rail, went down an embankment and overturned. The vehicle came to rest against a tree on the driver’s side, said Trooper C.F. Rogers.

The crash occurred around 11:15 a.m. and Mauldin was the only person inside the vehicle.

Mauldin was trapped inside the vehicle, and rescue workers used the Jaws-of-Life to cut the roof from the car. Firefighters from Miller’s Ferry Fire, Salisbury City Fire, Granite Quarry Fire and Rowan Rescue personnel worked to free Mauldin from his vehicle, said Battalion Chief Jay Baker.

Baker said the crash was initially reported at the intersection of Innes Street and Jake Alexander Boulevard. It took rescuers a few minutes to free Mauldin once they were able to remove the roof from the vehicle.

He was placed onto a stretcher and loaded into a waiting ambulance. He was taken to Carolinas Medical Center-NorthEast in Concord. His condition was not available Tuesday afternoon.

An official with P&J Tire and Trucking said it would take some maneuvering to get the vehicle loaded onto a rollback wrecker in order to avoid getting the vehicle caught on the areas of the guard rail that remained in place.

Two roadside assistance trucks with the N.C. Department of Transportation also responded to the scene.

Staff report SPENCER — The first steam engine rail excursions since 1994 will be going this year from the N.C.... read more