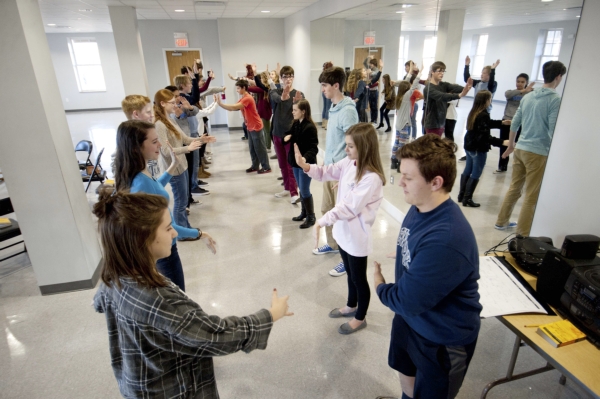 JON C. LAKEY / SALISBURY POST The first day of rehearsal for "Taming of the Shrew" was held at the Norvell Children's Theatre. The 30 cast members gathered on the second floor on Monday afternoon to start the rehearsal.

Rehearsals begin for PPT’s ‘Taming of the Shrew’ JON C. LAKEY / SALISBURY POST The first day of rehearsal for “Taming of the Shrew” was held at the Norvell Children’s Theatre.

If you happened upon a group of young people on the second floor of Piedmont Players’ Norvell Theater on Monday afternoon, you might have been able to identify exactly what was going on.

Paired off and facing one another a few feet apart, with one member of each pair mimicking the other’s movements, a casual observer would be forgiven for thinking they were teenagers teaching each other the latest dance craze.

But these are young actors, thespians honing their skills in preparation for the next big producation at the Norvell Theater. They are the cast of the Norvell production of William Shakespeare’s comedy, “Taming of the Shrew.”

The play centers on the Petruchio and Katherina, a headstrong and stubborn woman — and the shrew of the title. Initially, Katherina wants nothing to do with the proposed union, but, as the title suggests, Petruchio does “tame” her in the end.

For more information about the play and buying tickets, log on to www.piedmontplayers.com and go to the Norvell Theater section of the site.

Some healthy food alternatives for 2016