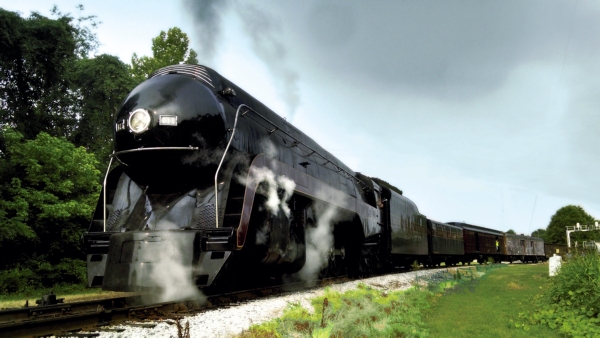 The Class J 611 steam passenger locomotive, which was restored in Spencer in 2014-2015, will be pulling excursion train trips from Spencer to Lynchburg, Va., and Asheville in April. The locomotive also will be at the North Carolina Transportation Museum in Spencer during the month of July and in early September.

SPENCER — The first steam engine rail excursions since 1994 will be going this year from the N.C. Transportation Museum in Spencer to Lynchburg, Va., and to Asheville, and they will feature the Norfolk & Western Class J 611 locomotive,

The excursions are scheduled for April 9 to Lynchburg and April 10 to Asheville.

As partners, the Virginia Museum of Transportation and the North Carolina Transportation Museum have announced the 611, which was restored in Spencer, will return to the mainline in 2016 with a  full schedule of public excursions and special appearances.

Designed and built in Roanoke, Va., by the Norfolk & Western Railway, the sleek and powerful Class J locomotives were once hailed as the finest steam passenger locomotives in the world.

“A ride behind the 611 is a bucket list dream come true for everyone who remembers the golden age of steam, or who has been lucky enough to learn her story,” said Beverly T. Fitzpatrick, Jr., Virginia Museum of Transportation executive director. “611 is the star of the museum’s collection and a traveling ambassador for the remarkable rail heritage of Norfolk Southern.”

The 611 will move from Roanoke to the North Carolina Transportation Museum in February in preparation for maintenance and its annual Federal Railway Administration inspection. Following that work, it will see four weekends of public excursions on the Norfolk Southern system.

A variety of seating options, including coach, first class, and dome cars is planned for each excursion. In addition, special appearances by of the 611 are planned for Spencer, Roanoke, Manassas, Va., and Danville, Va.

The first two public excursion trips will be hosted by the North Carolina Transportation Museum. On April 9, the 611 will run from Spencer to Lynchburg and return.

On April 10, it will travel from Spencer to Asheville and back via the famous “Loops.”

Following the North Carolina Transportation Museum excursions, the remaining three excursion weekends will be hosted by the Virginia Museum of Transportation.

On April 23 and 24, full-day trips will depart Greensboro to Roanoke and return to Greensboro.

The morning and afternoon trips are separate excursions.

On June 4 and 5, the 611 will pull a total of three trips from Manassas to Front Royal, Va., and return: One roundtrip on the morning of June 4 and two roundtrips on June 5 will be part of the Annual Manassas Heritage Railway Festival.

According to Mark Brown of the North Carolina Transportation Museum, the schedule for ticket sales for the Spencer excursion trains is as follows:

• Jan. 28 — Cutoff for new members to join to receive members only sale benefit.

Go to nctrans.org for more information.

In addition to being able to ride or watch the 611 roll by on excursions, the public is being invited to take advantage of a number of opportunities to get up close to 611 under steam, take photos and meet the crew.

“We are very excited to offer this experience that people haven’t had before, to get really close to 611,” said Jim Stump, Forward 611 committee chair for the Virginia Museum of Transportation. “We will be taking 611 to new destinations and giving communities an exciting opportunity to celebrate their history and rail heritage. It is amazing to experience this engine fired up.”

The 611 will be featured in special events at the North Carolina Transportation Museum in July, and it will return to Spencer in early September for special events and maintenance.

For other event information and to sign up for email notifications, visit www.FireUp611.org.

Famous 1856 engine will come to Spencer Shops for restoration