Big Band Bash an evening of food, fun and Frank 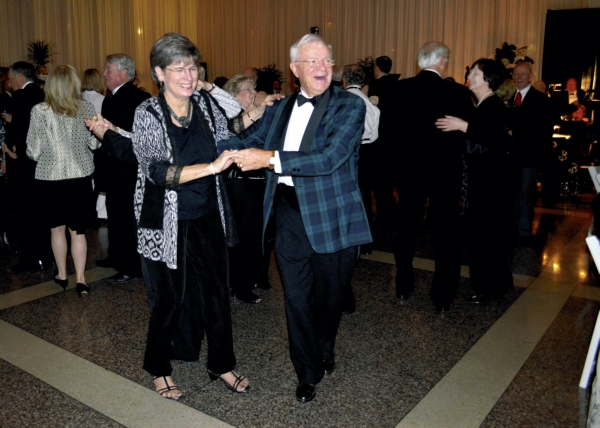 Lynn Hales dances with dear friend and neighbor Dr. Richard Brownell. Husband Karl was sidelined with a bad knee, she said. Photo by Susan Shinn, for the Salisbury Post.

It was the biggest Big Band Bash yet.

Some 250 patrons attended Big Band Bash, which included a tribute to Frank Sinatra, whose 100th birthday was Dec. 12. It was the biggest attendance in the event’s 15 years, according to Dr. Michael Bitzer, who served as committee co-chair with wife Andrea Anders. The Big Band Bash serves as the major fundraiser for the Salisbury Symphony.

First, the crowd gathered in Hedrick Little Theatre for a nearly hour-long concert by a big band ensemble of symphony musicians, led as always by Maestro David Hagy. Then, it was over to the Crystal Lounge for dinner and dancing to cap the evening.

“It really has been a joy,” Hagy remarked of working with the tuxedoed gentlemen. “It just proves how many great singers we have in Salisbury.”

The band also had a chance to shine in the bouncy instrumental, “Two O’ Clock Jump.” Hagy stepped to the side during that number.

Jean Wurster was thrilled to win a trip for two to New York City. Charles and Rachel Oestreicher Bernheim sponsored the trip.