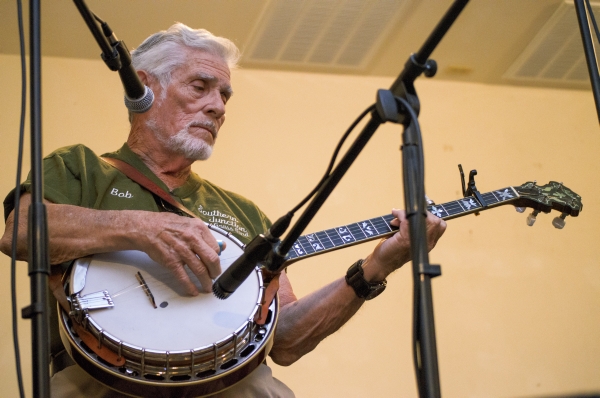 GOLD HILL — Dozens of people on Saturday gathered at the Old Shaver School Event Center to enjoy hours of toe-tapping music and give back to a local bluegrass legend.

The crowd was gathered to thank Concord native Bob Shue, who built and repaired hundreds of instruments for musicians. Every band gathered at Saturday’s event had a nice word to say and probably a story or two to share.

Sandy Hatley, who helped organize Saturday’s event, calls Shue her banjo doctor. Shue could fix an instrument like no other and build them just as well, if not better, than major manufacturers, she said.

Joe Mahaffey, a member of the band Nu Highway, said there was no one that could build a mandolin quite like Shue.

“It had such a sweet, resonant sound,” Mahaffey said. “I’ve got a friend, in fact, that still plays his Shue mandolin that’s at least 30 years old. He won’t even play anything else because it’s so good.”

People waited in line, Mahaffey said, just to get a Shue mandolin. In addition to being a skilled craftsman, Mahaffey said Shue was also a talented musician. Shue has been in a few bands during his life, and currently is part of one called Southern Junction.

“Southern Junction is just a band that you knew was going to put on a really good show,” Mahaffey said.

Shue was born in 1936. He picked up a guitar at at 12 and later learned to play the mandolin. At 26, he gave the banjo a shot and stuck with it.

In the early 1960s, friend Gene Yow asked if Shue would build a mandolin. Shue had worked on instruments before and agreed to give it a try. He worked on it in his spare time on the kitchen table or a table on the back porch.

He’s since built about 200 mandolins, 35 Martin guitars from kits, four Dobros and one upright bass. He’s currently working on two mandolins that he says will be his last.

As part of Saturday’s event, all bands played for free. Organizers collected donations and held a silent auction with all proceeds going to Shue, who’s battling health problems. During Saturday’s event, bands said the benefit was their way of giving back to a man that’s been vital to bluegrass music.

Just before Shue and his band Southern Junction took the stage to a raucous applause, Hatley presented Shue with a plaque noting his contribution to music.

“It’s such a pleasure to have Bob here and be able to play for us,” Hatley said. “He’s been an icon in the bluegrass industry and in the state, this region and several states for more than 40 years.”

The reserved and humble Shue offered few words after receiving the plaque and thanked God for keeping him alive.

“I love my God that’s kept me here,” Shue said. “I’ve been through four hospital bouts and they thought I was gone, but God pulled me back. I thank God for that, and I thank him every day of my life. If I can help anyone, I will. Thank you very much for tonight and thank you for the award.”