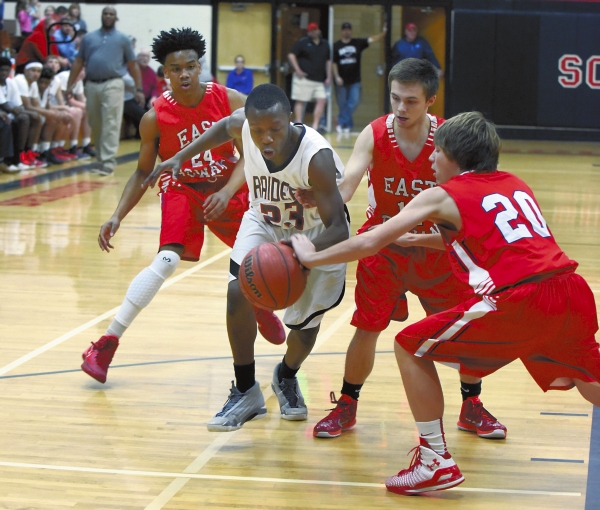 LANDIS — Just over a week ago, the East Rowan and South Rowan boys played a three-point thriller in the Moir Christmas tournament and it looked like a repeat was in the works last night in the Raider gym.

The teams matched baskets through most of the first period with East holding a slim 22-18 lead. But just like that, the teams went in completely opposite directions, as East got red hot and South went ice cold resulting in a 78-37 bashing by the Mustangs. Both head coaches cited one key factor in the way the game turned: defense.

“It really started for us on the defensive end, ” East coach Kurt Misenheimer stated. “The harder you play defense, the easier it gets on the opposite end. Steals, deflections and rebounds all usually turn into easy baskets.”

The bottom two teams in the South Piedmont conference came in looking for their first league win of the season. East (3-12, 1-8 SPC) placed four players in double figures with all 11 players on the team scoring. For the Raiders (0-15, 0-9 SPC) it was a frustrating night as they managed just 19 points in the final three quarters, after scoring 18 in the opening period.

A key factor in the Mustang success was a barrage of seven three pointers, three in the second quarter when East went from six up to a 38-18 margin. Logan Shuping came off the bench to score two of the long shots and Ellis Taylor added another. The score reached 41-24 at halftime and was never in doubt as the Mustangs gradually made it a 40-point game late to cause a running clock.

Senior guard Austin Love dropped in 16 of his team-high 18 in the first half to start the rout, most of them coming due to slashing drives down the lane. Love said he was glad to contribute some scoring but felt the victory was more important. “I am just glad we could get a great team win,” he said. “Everybody on the team scored and I am glad we finally came together and pulled out a big win.”

Love’s 18 led the winners followed by sharpshooter Shuping with four threes and 15 points, freshman Brevin Goodlett with 12 and forward Trevor Scruggs with 10. The Raiders were led by speedy senior guard Tre Littlejohn with 13 but he too was a victim of a solid East defense as he was held without a field goal in the second half. In fact, South could only muster four field goals and 13 points against the pressing Mustang defense in the final half.

“We have a lot of good shooters on our team and this was a night we have been waiting for all season,” Misenheimer said of his team’s offensive outburst. “But once again, it really started on the defensive end. It was a good win for us.”