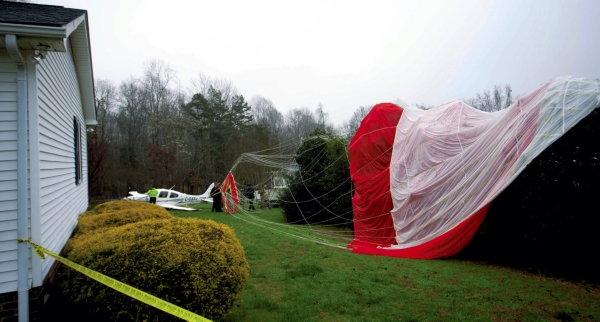 JON C. LAKEY / SALISBURY POST Emergency personnel responded to Westchester Drive in Kannapolis to reports of a small plane crash on Friday afternoon. A Cirrus SR22 aircraft with two people on board came to rest on Bud and Lynn Welch's chain-link fence not to far from the their home. Both of the people in the aircraft emerged shaken but uninjured waited for emergency personnel arrival in the Welch's home. The 1-ton aircraft comes equipped with an emergency parachute which deployed. Friday, January 8, 2016, in Kannapolis, N.C.

Plane with parachute lands safely in backyard of Kannapolis home

KANNAPOLIS — A single-engine Cirrus aircraft with a built-in parachute for safety made an emergency landing Friday afternoon in the backyard of a Western Acres home off Westchester Drive.

The Canadian couple flying the plane were not hurt. Western Acres is located in a corner of Rowan County close to the Cabarrus County line and not too distant from Iredell County.

The pilot successfully landed the Cirrus upright. Damage was mostly to the plane’s landing gear, left wing and prop.  As it landed, the disabled plane clipped a chain-link fence in the yard of Bud and Lynn Welch.

The orange-and-white parachute ended up draped over a row of tall holly trees nearby.

“I just heard a loud noise and a thump,” Bud Welch said. He and Lynn were inside their home. Lynn informed Bud a plane was in their backyard, and while she dialed 911 for help, Bud went to check on the plane’s occupants.

“Both of them were crawling out of the plane — and they’re fine,” Welch said.

The Welches invited the couple inside their home so they could calm their nerves a bit until emergency personnel arrived. Atwell Fire Department and the N.C. Highway Patrol were the chief responders.

Welch said the couple had flown out of Canada and stopped in Reading, Pa., where they had to go through customs. They intended to stop in Charlotte to refuel when the plane started experiencing its mechanical problems over Rowan County.

Neighbors said the Cirrus, which weighs just over a ton, started its downward path into the subdivision from the northern end. In making its emergency landing, the plane just missed a carport of the Welches’ neighbor.

The plane also missed a nearby wooded area behind the houses on Westchester Drive.

The airframe parachute system is standard equipment on every Cirrus aircraft. This particular model was an SR22.

“I heard a big popping sound,” said 13-year-old Madison Hill, who was next door. “It sounded like a crash. … Luckily they didn’t hit anything but a fence. … You could tell they were shook up.”

James Smith, who lives a street away, said his son heard the crash and also described a noise like a gunshot, which several people figured was the sound of the parachute firing out and deploying.

Looking around at all the people and emergency vehicles, Bud Welch said it was definitely the most excitement he had seen during his 18 years on Westchester Drive.

Brenda Zimmerman: ‘I will be forever grateful that God led me to this place’