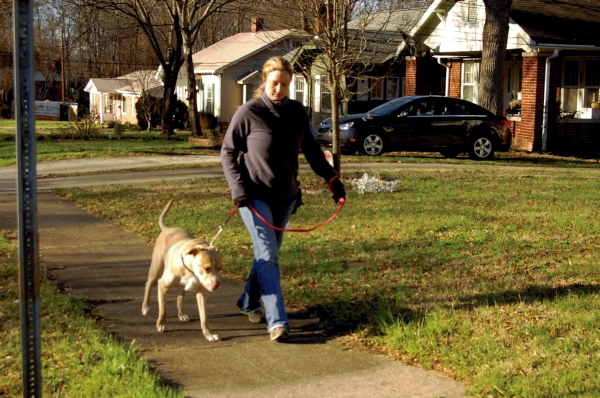 The cat of Jessica Buckwalter, a resident of Fulton Heights, was killed by two aggressive dogs that have been roaming free around the Fulton Heights neighborhood. Rowan County Animal Control has been patrolling the area daily to look for the dogs. Amanda Raymond/Salisbury Post

Rowan County Animal Control is doing everything it can to catch the aggressive dogs that are running loose in Fulton Heights, an Animal Control officer said.

Since October, the Fulton Heights neighborhood in Salisbury has been struggling to locate two dark-colored pit bulls that have been roaming free. The dogs have killed the cats of at least five families.

Animal Control has been patrolling the area, now on a daily basis, but has still not been able to locate the dogs.

“We’ve been trying set traps, but so far nobody’s willing to let us set dog traps to try to catch them,” Animal Control Officer Tommy Staton, who is also field supervisor, said.

Staton said the traps are live-capture traps. Food is placed inside of the trap and once the animal goes in to eat the food, the trap’s door shuts behind them. Animal Control set up one trap, but the resident later asked the officers to remove the trap because it kept trapping their cat, Staton said.

Dotty Hoy, president of the Fulton Heights Neighborhood Association, said animal control, code enforcement, the Salisbury Police Department and other officials have been working hard to help solve the problem.

“I think I saw Animal Control go past my house three times this morning already,” she said.

Since there is a leash law in Rowan County that cats are also subject to, Staton said if cats are kept in a secure enclosure, they should be safe.

According to section five of the current leash law, non-vicious animals must be restrained whether on or off the owner’s property by a leash, harness or other restraining device, or be enclosed within a cage, fence, indoors or another secure enclosure. The law also defines sufficient restraint as “immediate supervision of an animal by a competent person which both are in the limits of the real property of the animal’s owners or keeper.”

A failure to restrain non-vicious animals could result in a $25 penalty.

Barry Brown, who is not a Fulton Heights resident, said cat owners should take the leash law seriously.

“I feel bad that they’ve lost their animals, but I don’t feel bad (because) they let them run around free,” he said.

Jessica Buckwalter, a resident of Fulton Heights, lost her cat to the dogs. She said the dogs tried to get her cat one night but she was able to shoo them away. But the dogs came back and dragged the cat off of Buckwalter’s front porch, leaving him dead in the front yard.

Buckwalter said with all of the hype around the issue, she is afraid people might go after the wrong dogs.

“People are freaking out. They’re just like, any pit bull or any black dog or any dark dog they’re just automatically like, ‘That’s him,’” she said.

Hoy said she has not heard of any instances of the loose dogs going after other dogs or people.

According to research done by 1800PetMeds, although pit bull attacks have resulted in more deaths than attacks by other breeds of dogs, the likelihood of being killed by a pit bull is lower than many other breeds.

Staton said so far, no Animal Control officers have seen the dogs. Anyone who does see the dogs is encouraged to call 911, and Staton said if the dogs are friendly enough, residents could also find some way to restrain the dogs until Animal Control is able to get out to the area.

The Fulton Heights Neighborhood Association will have its annual meeting on Jan. 12, during which a representative from Animal Control will speak.