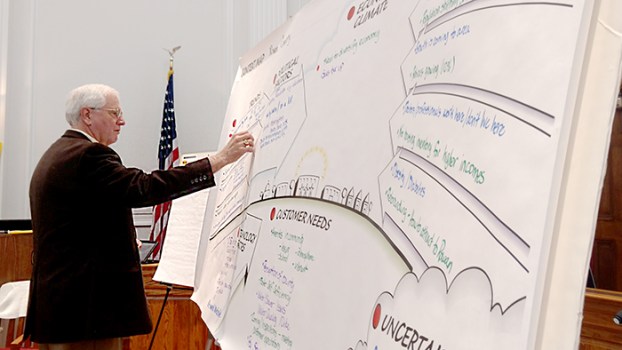 Poverty is one of Rowan County’s most significant barriers to booming economic growth, according to county commissioners.

For hours during Thursday’s annual planning retreat, commissioners tossed around ideas about problems and opportunities facing Rowan. They toyed with a number of topics as barriers to economic growth — a main topic during Thursday’s retreat. Other topics included: education, workforce training and inaction by previous county leaders.

The conversation, however, quickly turned lively when Commissioner Judy Klusman challenged Commissioner Craig Pierce about a claim that Rowan’s impoverished residents were dragging down the local economy.

Early in the meeting, Pierce mentioned impoverished residents who receive government assistance as a problem for the local economy. Specifically, he said Rowan ranks as “the lowest revenue per capita in the region.” The city of Salisbury contributes to the problem, he said, because of public housing contained within municipal limits. As commissioners wrapped up for the day, he mentioned his argument again, agitating Klusman.

“OK, where’s the evidence to back that up?” Klusman asked. “If they are the working poor and have several children, they qualify to live in low cost housing. … What do you tell the school teacher that works for the school system who has four children and has to survive on food stamps?”

“I would tell them they shouldn’t have four children because that’s not what their income can support,” he said. “I mean, we can’t be held responsible for someone else’s irresponsibility.”

When asked again to back up his claim that most Rowan residents don’t pay property taxes, Pierce referenced a study conducted soon after he was elected in 2012. The study found 42 percent of Rowan residents own all property in the county. Pierce said the study was conducted in conjunction with a previous effort to implement a 1-cent sales tax “to evenly distribute the cost of running county government to all residents.”

Referencing public housing, Pierce said Rowan has to find a way to put low-income and impoverished residents “on the tax books to help offset our costs.” A sales tax is one solution, he said.

“It’s not fair to put taxes on 42 percent of the residents and say, ‘Y’all pull the wagon while we keep stacking rocks in the back of it,” Pierce said. “That’s my whole point. We’ve got to quit enticing people to come and live here for free.”

Klusman said public assistance rules are the same for every resident of North Carolina.

“But every county in the state isn’t building public housing as quick as they can scrape the ground up,” Pierce said, focusing on Salisbury. “We need to have a state mandate that says a county can only have a certain percentage of public housing. Until we do that, we’re going to catch it on the chin all the time. We need to get our legislators involved and stop this before it overruns the county.”

“We have a larger poverty rate than most, if not all, in the region,” Edds said. “Now, common sense tells us that those folks are probably not pulling a large percentage of the tax load. So, our challenge is to begin to overwhelm that population with an additional population that is contributing to the tax base.”

However, he said a county can’t survive off of its residential property taxes alone. Rowan also needs to attract additional manufacturers, he said.

Pierce and Klusman debated back and forth for a period of several minutes. Pierce then briefly softened his tone. A single school teacher with several children is a tragedy, he said, but commissioners can’t base their actions off of “an exception.”

As an example of the economic problem he referenced, Pierce mentioned Clancy Hills Apartments in Salisbury. Pierce, who owns a local construction business, said he’s done work at the complex.

“A girl goes in and gets pregnant and automatically qualifies for a two bedroom apartment. So what’s she do? She moves her boyfriend in for free,” Pierce said. “And this is the truth. You can ask the sheriff about this. … (The boyfriend) is slinging crack rock all day long, driving a brand new Lexus out there. She’s living in this house and paying no rent, no power, no phone and she gets $552 per month per child.”

Pierce said Rowan can’t grow efficiently if its continues to “have this drag on our income.”

Thursday’s meeting served as a primer for today’s portion of the county commissioners’ retreat. During today’s meeting, commissioners are scheduled to draft a definitive list of projects for the coming year. The meeting will start at 8:30 a.m. in the second-floor conference room of the County Administration Building, 130 W. Innes St. The retreat is open to the public.