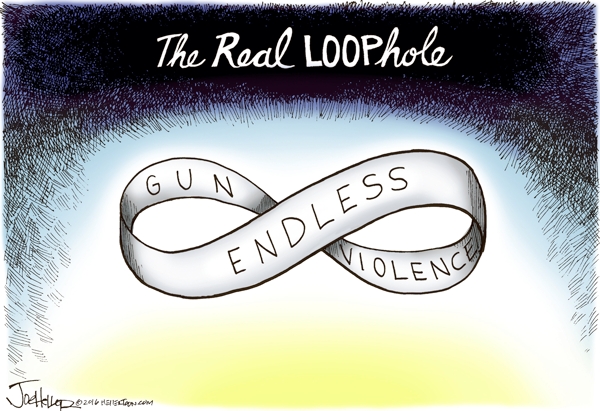 Mind your own business. That’s the message that President Barack Obama is rightly sending to unlicensed gun sellers who have long flouted federal law with a wink. Now Washington will stop winking back.

Of the new gun policies that Obama announced this week, the most important is his directive to the Bureau of Alcohol, Tobacco, Firearms and Explosives, or the ATF, to clarify what it means to be “engaged in the business” of selling guns. This phrase, which comes from a 1986 law, matters because only those who regularly buy and resell firearms are required to obtain a sales license and conduct background checks on all buyers. Individuals who make only “occasional sales” from their personal collections are exempt.

Unfortunately, the ATF has — under both Democratic and Republican presidents — allowed the phrase “occasional sales” to mean almost anything, which has rendered the background check system optional. Those who want to avoid a check can easily buy a new gun through an unlicensed vendor. A 2015 report by Everytown For Gun Safety (co-founded by Michael R. Bloomberg, majority owner of Bloomberg LP) found that a small group of unlicensed sellers were offering guns in high volumes — more than 25 guns a year, and as many as 150 — and the majority of those vendors met additional indications of illegally “engaging in the business.”

This sprawling universe of underground dealers fuels criminal activity by making it easy for felons and other dangerous people to buy guns and for traffickers to avoid detection. A gun purchased without a background check cannot be traced back to the buyer if it is recovered in a crime.

The best way to bring underground sellers into the regulated market’s background check system is through legislation. But with Congress refusing to take up the issue, executive action is the next best thing. Still, it would have been better had Obama directed the ATF to formally define the meaning of “occasional sales.” Instead, the ATF will merely provide guidance to unlicensed gun sellers about what it means to be in compliance with the law. It remains to be seen how much weight such guidance will carry with sellers _ or with judges and juries.

Polls consistently show that the vast majority of Americans, including gun owners, support background checks for all gun sales. As the president acknowledged on Tuesday, that’s not going to happen during his presidency. Narrowing the “occasional sales” loophole is a start _ a small but useful step that may, unfortunately, prove to be Obama’s most significant legacy on gun safety.

Chris Fitzsimon: The very least we can do on gun violence

A picture accompanying a recent story about U.S. gun laws in the Guardian newspaper shows a sign on a table... read more