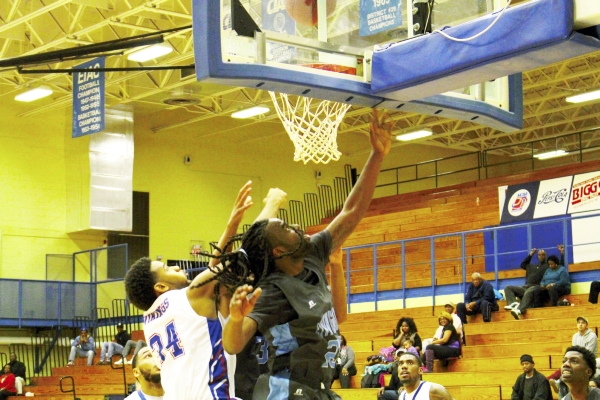 ELIZABETH CITY — You could say that the home-standing Vikings of Elizabeth City State won the game at the free-throw line.

The Blue Bears were whistled for just six more fouls (21-to-15) during the game, but Coach James Stinson’s Livingstone team shot just five free throws all night, making but two of them.

Livingstone made 47 percent of its field goal attempts (30-of-64) and was 10-for-23 from behind the three-point arc. But 16 turnovers, compared to just nine miscues for the Vikings, hurt Livingstone’s effort as well.

The loss was Livingstone’s first in the CIAA this season (2-1) and the Blue Bears fall to 7-7 overall. Elizabeth City St. improves to 5-6 and 2-2 in the conference.

Livingstone held a slim 34-31 halftime lead but within a minute, the Vikings had taken a 38-34 advantage. Daryl Trynham drilled a 3-pointer for Livingstone and the two teams took turns leading throughout most of the second half.

In fact, the Blue Bears went back up by as much as nine points twice in the later minutes of the contest.  A dunk from Cordero Holt made it 69-60 Livingstone at the 4:32-mark and a layup from Trynham with 3:14 left made the score 71-62.

But an immediate 3-pointer from ECSU’s Miykael Faulcon started the Vikings’ comeback and a layup and foul shot by Clayton Cowell brought the home team within three points with 2:44 left.

Matthew McIntosh’s tip-in eventually tied the game at 72-72 with 46 seconds remaining, but Livingstone would not score again. Four free throws down the stretch from Cowell and DeCarlos Anderson sealed the win for the Vikings.

Guard Ty Newman had another good game for Livingstone, leading the Blue Bears’ attack with 21 points. He was followed by Eric Dubose’ 18 points and 17 for Trynham.

Jimmy Wilson had nine rebounds for the Blue Bears.

The Vikings were led by Faulcon’s game-high 25 points, 20 from Anderson, 13 from Cowell and 12 by Jordan Jones.

Livingstone returns to action on Saturday with a 4 p.m. game at Virginia State.