Brenda Zimmerman: ‘I will be forever grateful that God led me to this place’ 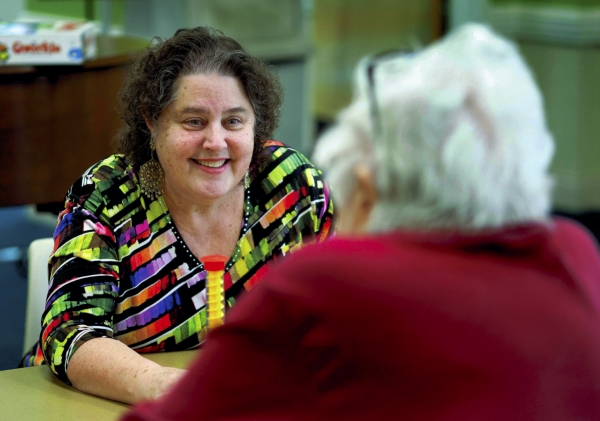 An intense game of Tenzi is underway and residents with names such as Cindy, Leon, Mack, Gladys, Hilda, Dortha and Mary Catherine are taking their turns at rolling dice and trying to collect 10 of the same number.

Zimmerman whispers to a visitor that Tenzi is so popular as a game, “we had to buy three sets.”

Nearby, Zimmerman’s 11-year-old dog, Gracie, is sleeping on top of her master’s push cart. A little sign taped on the cart under Gracie says “Spoiled rotten.”

“I can be gone for two weeks and I walk in the door and people say, ‘Gracie’s here!'” Zimmerman complains.

Zimmerman’s last day is Friday, when Trinity Oaks will be holding a drop-in reception for her from 2-4 p.m. in the Event Room/Chapel.

Consider the years  Zimmerman has been planning, organizing and following through on programs, events and activities for the residents, and you understand why it might take her awhile to decompress.

“I’m going to have to reinvent myself,” Zimmerman says.

Lynn Barringer — the women have worked closely together since 1991 and can pretty much complete each other’s sentences — says Zimmerman’s creativity served her well.

“Her mind never stops,” Barringer says, “and she can see what the end result is.”

Zimmerman became good at improvisation, too. In her business, she learned things don’t always go as planned, so you have to know how to change course in a hurry.

“If someone doesn’t show up (for a program),” Creamer says, “she fills in herself.”

Creamer says Zimmerman also is especially good at relating with new residents. “She makes us feel at home,” Creamer says.

Zimmerman started at the Lutheran Home in Salisbury in 1981, when Ted Goins was in training as an administrator.

Goins is now president and chief executive of the Salisbury-based Lutheran Services Carolinas, the large umbrella under which Trinity Oaks falls.

Goins says Zimmerman seems to be everyone’s neighbor, “in the best sense of the word.”

“Whether a physical neighbor, a nursing home resident or a volunteer, Brenda is the person who wants to know you and help you in any way she can,” Goins says. “She and her neighborliness have been our not-so-secret weapon for 34 of Trinity Oaks’ 40 years of service to the people of Rowan County.”

Zimmerman first arrived on the doorstep of what was then called the Lutheran Home for the Aged and Infirm as a crafts teacher. It was supposed to be a six-week gig, but became what she describes as a life-altering career move.

Dellene Gudger and Isaac Kuhn saw some magic in Zimmerman and asked the experienced art teacher to stay on full-time. Zimmerman said the people, job and vibe she felt for the Lutheran Home “captured my heart.”

“I will be forever grateful that God led me to this place,” she says.

There was a time when animals weren’t allowed in the building. Now pet therapy programs are an integral part of the residents’ lives.

When Zimmerman first started working here, no one ever went back home. Now a good percentage of new admissions return home after going through rehabilitation programs — many following surgeries or strokes.

Gone are the days when all medical records were written by hand in black ink. Now everything is computerized, date stamped and electronically signed.

Zimmerman laughs, thinking about how the personal technology used by residents has changed, too.

“Years ago, if a resident needed to use the phone, he or she went to the nurse’s desk and made a call from there,” Zimmerman says. “Then we got fancy and had a portable cordless phone that could actually go to the individual’s room.

“Now residents are admitted with their iPad, cellphone and laptop ready to go as soon as we give them the password.”

She remembers long ago when one resident attending services in the chapel would place a Baby Ben clock under her lap robe and set the alarm for noon, a signal to the chaplain to wrap things up.

As the years went by, Zimmerman found herself reminding residents in the chapel to turn off their cellphones instead.

On four different occasions, Zimmerman stood bedside as a resident died. Those times were the toughest.

It used to be, when a resident passed away, the Lutheran Home would close all the doors on the halls and take the body out a back door. Today when a resident dies, the staff and residents who wish to line up along the halls in silent tribute as the deceased is taken out the front door.

“We don’t try to hide it from the residents,” Zimmerman says. “They’re grown-ups. They know.”

Trinity Oaks became family to Zimmerman. For much of her working days, she was a single mom, and she found strength and support in her Lutheran Home family.

“My daughter grew up in this building,” she says of Kelaine, now married. “Her first visit was when she was three weeks old. I brought her with me one night so I could get the newsletter out before I was back full-time.

“… The night my mother died, the first faces I saw when I crossed the threshold of my house were Donna Stepanian (director of nursing at the time) and Willi Beilfuss (administrator).”

Deana Burris, life enrichment campus director for all of the Trinity Oaks entities in Salisbury, says one of Zimmerman’s greatest assets was her genuine love for the senior population.

She had a way of connecting “on a unique and special level” with residents at Trinity Oaks Health and Rehab, according to Burris.

Zimmerman also had an extensive knowledge and outreach within the community itself, “which she was able to bring inside our community,” Burris says.

Brenda Malone Zimmerman moved to Salisbury from Tennessee as a teenager, after her father died. She graduated from Salisbury High and Appalachian State University. For four years, she was a traveling K-12 art teacher in Virginia before moving back to Rowan County.

She worked a year as an interim art teacher locally before taking the temporary job in crafts with the Lutheran Home and staying on. She jokes that it has been “a long six weeks.”

Except for five years working in corporate public relations and marketing for Lutheran Services, Zimmerman has been leading activities at Trinity Oaks. At Kuhn’s urging, she became deeply involved with professional organizations and networking with others in her field.

“Everybody has some little lady who does things or has a family who is this way or that.” says Zimmerman, a charter member of the N.C. Activities Professionals Association. She served on its board for 20 years and has made several presentations at the state and national level.

Zimmerman says she and Barringer have relied on a good army of volunteers, without which their programs couldn’t survive. “They are huge in what we do,” Zimmerman says.

Zimmerman was adept at finding ways to provide carnival-type settings for any kind of theme, even marshmallows. She also made a point to incorporate exercise and brain games in her carnivals, trying to make sure the events weren’t too childish or juvenile.

Barringer came up with the idea for an annual prom for residents, which grew into the Harvest Moon Ball, a huge event at Trinity Oaks that’s going on its ninth year.

The women also started Wednesday night educational programs, which have become highly popular. Sessions focusing on books and reading have evolved into a lot of computer-based offerings, which are parts fun and parts instructional.

“The educational sessions mean a lot,” Zimmerman says. “… Change is not a bad thing.”

You name it, and Zimmerman and Barringer have done it: hayrides, field trips, pig-kissing, Olympics, quilt shows, bonfires and spinster parties.

Zimmerman knows it may not be politically correct to have held a spinster party, but some time back there were 15 to 16 women in residence who had never been married and they welcomed the idea. She remembers going around the room and asking “Miss” Lessie to introduce herself.

One of Zimmerman’s favorite expressions also was given to her by an older resident, who liked to say, “My forgetter is my best working part.”

Over the years, Zimmerman had two different opportunities to go back to teaching. She couldn’t do it.

“I can’t imagine having spent these years anywhere else,” Zimmerman says.