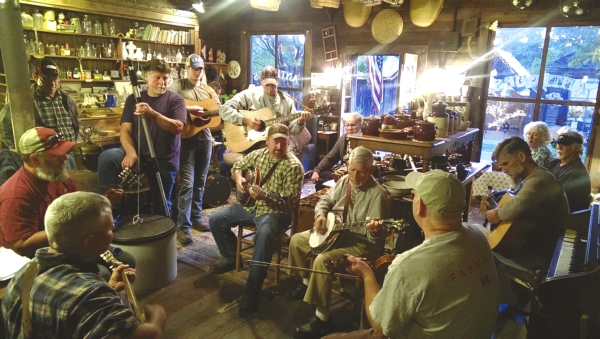 Bob gets center seat at the Gold Hill jam.

GOLD HILL — The Bob Shue Appreciation Day will be held on Saturday Jan. 9, from 4 until 8 p.m. at the Old Shaver School Event Center in Gold Hill. The event honors Bob Shue of Concord, who is an accomplished luthier, acoustic instrument repairman and award-winning bluegrass musician.

Shue was born in 1936 and began playing guitar at the age of 12, then later learned to play the mandolin. He took a break from the music in his late teens and early twenties. He was a typical teenager concentrating on school and work and growing up during hard times.

At the age of 26 he picked up the banjo and chose to stay with it. He married and raised four children. Two of the boys, Terry and Todd, followed their dad into the music industry. Terry, the older of the two, plays upright bass and Todd plays mandolin.

In the early 1960s a friend ask Bob to build him a mandolin. After having worked on a few instruments doing repairs he felt like he could give it a try. So he built his first mandolin for Gene Yow, working in his spare time on the kitchen table or on a table on the back porch.

To date he has built close to 200 mandolins, 35 Martin guitars from kits, 4 Dobros and one upright bass. He is currently building two mandolins which according to Bob will be his last. His health is preventing him from being able to handle the stress and demands of the tedious work involved in building instruments.

In 1970 Bob was introduced to North Wilkesboro native Ralph Pennington, who had honed his skills with fellow pioneers The Church Brothers, Roy Hall, Don Walker and L.W. Lambert, and had fronted his own band through the years.

Pennington had relocated to the Salisbury area and partnered with Bob to form the band Carolina Mountain Boys which became Bob’s first effort at performing with a band.

By the mid ’70s Bob was fronting his own band,  Southern Run. Southern Run eventually evolved into Southern Junction which through the years has included Johnny Pennington, Jerry Johnson, Howard Greene and Mack Watson. As Bob’s sons Terry and Todd grew more proficient on bass and mandolin Southern Junction was becoming one of the top bands winning top honors at competitions throughout North Carolina, South Carolina, Georgia and Virginia.

Bob continued to play banjo and perform with his sons throughout the southeast in the current band, Southern Junction with Donnie Peyton on guitar until just a couple years ago. Heart attacks and continued heart related issues have taken their toll forcing him to take a big step back from the music he loves.

The Bob Shue Appreciation Day was organized to help with Bob’s mounting medical bills. The event will be held at the Old Shaver School Event Center. Bob’s band Southern Junction will perform. Other bands will include The Grass Strings of Kannapolis, Movin’ On Bluegrass of Concord, Back Porch Bluegrass of North Wilkesboro and The Hately Family of Stanfield.

An open Bluegrass jam will be held on the main stage to include all musicians who want to participate. All musicians are invited to bring an instrument to jam or play a set on stage.

Everyone is invited to bring a food to share and items will be accepted for a silent auction. A plaque will be presented to Mr. Shue in appreciation of his many contributions to the Bluegrass music industry.

Admission is by donation.