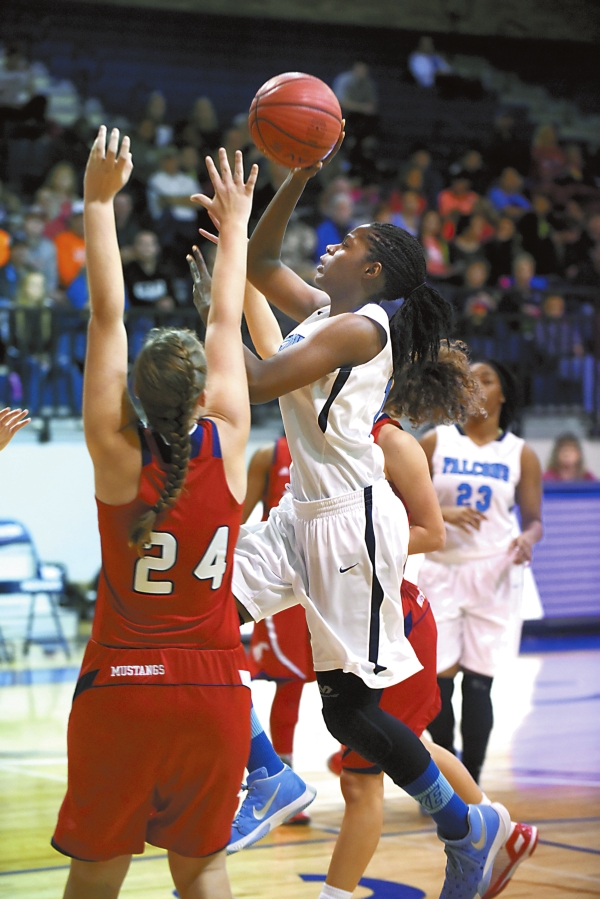 MOUNT ULLA — To win on Wednesday at West Rowan, Davie’s girls needed skilled 6-foot post player Ashlyn Hampton to dominate.
Hampton, a junior already committed to Campbell, scored 18 points, but she didn’t dominate. The Falcons won, 68-61.
Egypt Alexander, a 5-foot-9 sophomore, scored a career-high 24 points for the Falcons and also provided the containment on Hampton. She is West’s tallest starter.
“I challenged Egypt,” West coach Ashley Poole said. “She couldn’t let Hampton take over the game.”
The teams had postponed their scheduled meeting on Dec. 9 and didn’t meet in the recent Christmas tournament. That left people wondering if West could deal with Hampton, but the two hardest-to-stop people turned out to be West’s Alexander and Khaila Hall, who scored 16 points.
“Hall’s good,” Davie coach Dave Ruemenapp said. “Quick and strong and a tough matchup. Too fast for our bigs. Too strong for our guards.”
Davie got 16 points from freshman guard Emma Slabach and 13 from senior guard Madison Zaferatos. Slabach rained in four 3-pointers, while Zaferatos made three.
Besides the 40 points produced by Alexander and Hall, the Falcons got 12 from freshman Mary Sobataka and 10 from Taylor Martin.
“Egypt was running the floor and finishing, and Khaila made great passes tonight,” Martin said. “And, fortunately, our defense was on.”
Martin keyed that defense with repeated steals, deflections and world-class peskiness.
The 5-foot Martin’s impression of a hungry mosquito riled Davie ball handler Zaferatos, who finally just gave her a shove like a bouncer denying access to a sold-out show.
Hall and Sobataka made two 3-pointers apiece in the first quarter, as the Falcons stormed to a 16-9 lead. But six War Eagles scored in the second quarter as Davie fought back to a 30-all tie at the break.
Martin made a number of defensive plays in the third quarter. Her three-point play off a Davie turnover gave West a 40-33 lead. Her steal and layup put the Falcons in front 45-35.
Zaferatos led Davie back with a 3-pointer and pinpoint passes. Hampton powered home a three-point play, and the War Eagles climbed back within two at the end of the period.
“We had spurts where we played such great offense that we gave ourselves a chance,” Ruemenapp said. “But I never felt like we got over the hump defensively. It’s great to knock down shots, and it’s great that we kept fighting back, but at some point you have to defend.”
In the fourth quarter, Davie finally went in front. A bucket by Hampton tied it 51-all, and Zaferatos swished a long 3-pointer for a 54-51 Davie led. That was the pivotal point for West. A double-digit lead was gone. Davie had momentum.
“We knew we had to keep our composure,” Alexander said. “Their big girl (Hampton) is a lot bigger than me, and she’s very good. I had to try to keep her in front of me and get help.”
The tricky part to defending Davie is bringing enough help to handle Hampton without allowing Slabach and Zaferatos to bomb uncontested 3-pointers. West did a good job with its defensive rotations, and it was the Falcons’ turn to fight back.
Shanice Miller made a free throw to cut Davie’s lead to 54-52. Alexander’s swooping inside bucket made it 54-all with 5:10 left.
Hall took the game over from there, with 10 points down the stretch. Her huge 3-pointer from the right wing gave the Falcons (10-2) a 57-54 lead. After Hampton scored inside for Davie, Hall answered with a 3-pointer from the left side of the floor for a 60-56 West lead.
When Davie missed, Hall soared high for the rebound. That led to two clutch free throws by Miller.
After Hall boarded another miss, Sobataka made a free throw for a seven-point lead with 2:10 left.
And that was it. Davie (9-7) had taken its best shot, but it was out of gas. Late in the game, desperate 3-point tries fell well short of the mark.
“We cut our turnovers in the second half, and that really helped us,” Poole said. “Taylor was a defensive spark plug and Egypt ran the floor hard, but the biggest thing was Khaila playing like Khaila. We’ve missed that the last few games. She was great tonight — big rebounds, strong with the ball, not turning the ball over.”
Both teams won games in their respective leagues on Tuesday.
“We were tired, the foul situation wasn’t good, and we were playing on a strange night,” Ruemenapp said. “But you can find a lot of excuses for not winning. We needed to find a way to defend better and get it done.”
West will take some momentum into Friday’s SPC showdown at powerhouse Hickory Ridge. It will be the biggest game of the season for West’s girls. Both teams are unbeaten in the SPC.

From staff reports Jay Ritchie, 80, a Granite Quarry athlete who made it all the way to the big leagues... read more