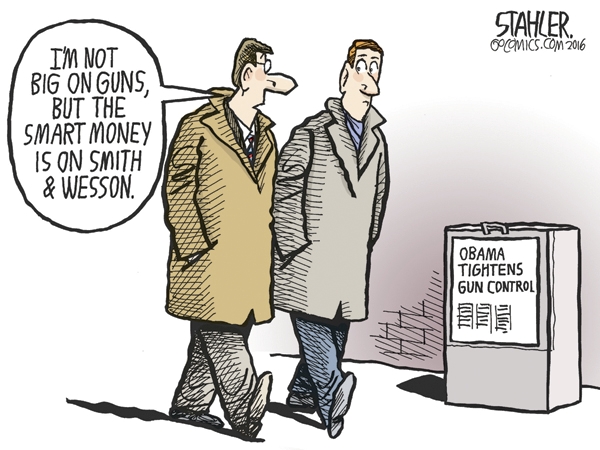 Excerpts of commentary about President Obama’s executive action on guns:

“This is it, really?” Jennifer Baker, a spokesman for the National Rifle Association’s lobbying arm (no pun intended) asks the New York Times rhetorically. “This is what they’ve been hyping for how long now? This is the proposal they’ve spent seven years putting together? They’re not really doing anything.”

She refers, of course, to what the White House calls President Obama’s “commonsense steps . . . to keep guns out of the wrong hands.” …

As for the “action,” as per a White House fact sheet, it consists mostly of an effort to “keep guns out of the wrong hands through background checks.”

In October, a CBS News/New York Times poll found that 92 percent of Americans — including 87 percent of Republicans — favor background checks for all gun buyers.

… So how can Jennifer Baker, a spokeswoman for the National Rifle Association, have been right when she said on Saturday, in a pre-emptive response to the forthcoming White House measures, that “the majority of Americans oppose more gun control”? Because Americans’ responses to polls on guns aren’t always internally consistent. For instance, in that same Quinnipiac poll last month, half of respondents said they oppose stricter gun laws in the U.S. — meaning that a significant proportion of people who said they backed a law requiring background checks said they oppose stricter gun laws.

Republicans, according to past studies, indicate they are more motivated than Democrats to donate money and vote for candidates based on gun platforms.

In an election cycle in which likely Republican voters say they’re more animated than Democrats about the presidential contest, a serious gun control clash could serve to enlarge the enthusiasm gap. Obama wants to excite his base and help the Democratic nominee to victory, but the president’s vow to sidestep Congress combined with the specifics of his gun control announcements could inspire conservatives to vote in larger numbers in November, no matter who the GOP nominee turns out to be.

Regardless of how he uses his bully pulpit, the president will not alter some basic truths about guns in America: More Republicans than Democrats are gun owners, and gun owners favor gun rights (and view the debate as central to their political engagement).

… Courts have struck down, repeatedly, efforts by governments to restrict individuals’ abilities to own firearms. In other cases, courts have demanded at least legislative permission before restrictions have been imposed.

If Obama could win for himself and his successor broader power to regulate the sale of firearms for the executive alone he will have struck a small, but very significant blow in his bid for large-scale gun control. Obama ultimately wants the right to regulate firearms the same way he can regulate the environment, banks and food, and this could be the start.

The path to the kinds of confiscations that Obama has said might be necessary could run through a loophole just like this.

President Obama closed by tearing up, the image I predict will be used, virtually forever, in “news” reports about this event. The clicking of camera shutters at that moment was almost deafening.

He told us the gun lobby wants guns available to “anybody, anytime,” and we have to stand up to “gun lobby lies.”

… The gun lobby and nobody wants guns available to “anybody, anytime,” that’s a bald faced lie. Jihadis, no guns. Hardened criminals, no guns. Crazy people, no guns. That’s what the NRA stands for.

Even as they talk about being the people’s representatives, members of Congress, almost all of them Republican, have chosen to do the bidding of a gun lobby that is astonishingly out of step with the public. For years, about 9 in 10 Americans — and nearly as many households with a National Rifle Association member — have supported universal background checks, and yet the N.R.A. reflexively opposes them.

So who better represents the wishes of the American people?