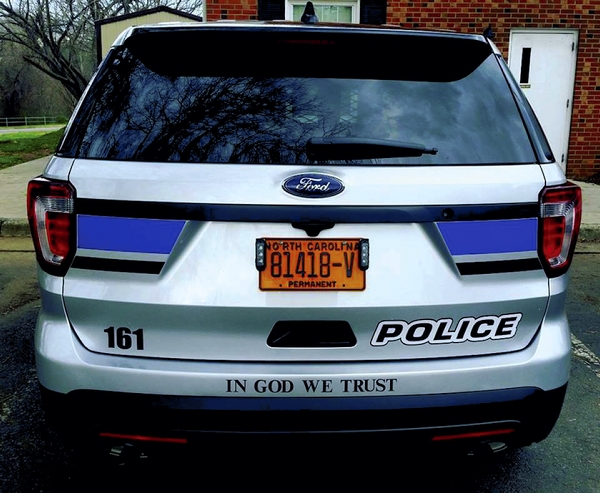 China Grove Police Department vehicles now bear the U.S. motto, “In God We Trust,” after the town board voted to have the decals placed on patrol vehicles and town fire trucks. A month ago, the board had the words placed inside its meeting room. The decision sparked debate on the police department Facebook page, where the announcement was made. China Grove Police Department photo

CHINA GROVE — The China Grove Police Department inadvertently ignited a firestorm of controversy after the agency posted a picture on its Facebook page of a patrol vehicle with the words “In God We Trust” on the bumper.

The picture featured the United States motto, which is written on many state and local structures including the Rowan County administration building, and an announcement letting the department’s social media followers know the decals would be placed on all of its patrol cars.

The phrase “In God We Trust” was placed inside the council chambers in town hall last month, and a week ago it was placed on all of the town’s fire trucks, without much ado from the public.

Mayor Lee Withers said it was not the town’s intention to cause such an uproar, nor was adding the decals to the cars a religious statement.

The Facebook post was written Monday night and rewritten after Withers said it needed to include an explanation about using the motto and the fact that the words were already on its fire vehicles and inside town hall. The original post simply said the words “In God We Trust” would be placed on the police department’s patrol cars.

As of late Tuesday, the post had received over 3,700 likes, had been shared 1,500 times and had garnered attention from commenters as far away as California and Colorado.

Some commenters said the phrase mixes religion with government. To that, Withers said it’s a government motto more than a religious one.

“I hate that it took the turn it did, because it turned into a religious issue and it was not,” Withers said.

“How great is this country that we can express ourselves and not face persecution. Everybody has their own opinion. We did not do it to offend anyone,” he said.

He said the words are the same sentiment that is evoked as flying the U.S. flag.

“We fly the flag here and are proud of it. We try to be right in with the letter of the law. It was something ruled by the Supreme Court that said it’s legal for us to do,” he said.

Despite some of the negative comments on social media, Withers said the majority of comments he’s received from people he’s seen, who have called him or texted him, has been positive.

“We are excited the community is behind it,” Withers said.

The decision to add the decals was in the works for a few months. The town had been waiting on the decals to be delivered, and when they were the words were added to the cars.

When the town added the words inside town hall it was decided by the board to do so with taxpayer dollars, Withers said, but the bill has not arrived and no money has been issued. When the board began talking about the cost of putting the words inside town hall, Town Manager Ken Deal reached out to the group U.S. Motto Action Committee, who could possibly help the town with the cost.

The board had already decided to pay for the signage inside town hall, but the group contacted town officials saying if they placed the motto elsewhere, they could help cover the cost.

Withers said the police and fire decals were at no cost to the taxpayers and there is a possibility the Lexington group could reimburse the town once the bill for the work on town hall does arrive.

If there’s anything that comes from this, Withers said, it’s that this has been an opportunity to educate people about the official U.S. motto.

“We’ll continue to support federal, state and local government as well,” he said.

Freightliner laying off 936 in Cleveland