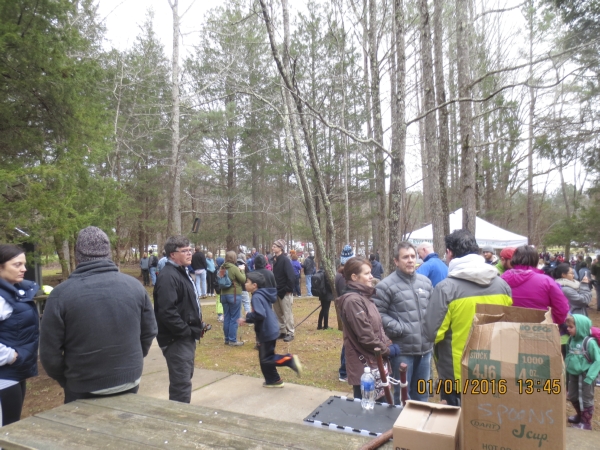 How many times participating in something does it take to make it a tradition? I don’t know, but I think the “First Day Hike” is becoming one for me. For those who don’t know, the “First Day Hike” is a program that has state parks around the country offering group hikes on Jan. 1. North Carolina has jumped in with both feet and has hikes all over the state. Part of the emphasis this year is that North Carolina parks are celebrating their 100th birthday.

Last year was my first First Day Hike and I went to Morrow Mountain State Park for a 4-plus-mile hike including a vigorous section going up the side of Sugarloaf Mountain. If you wish, you can read about it in the Jan. 2, 2015, edition of the Salisbury Post. I had such a good time last year, I just had to do another this year. I decided that I wanted to go somewhere else and also to hook someone else into the hike with me. That had both positive and negative aspects.

The only friend that I could find that is as crazy as me to go out on a chilly Jan. 1 to walk in the woods lives in Raleigh. To split the driving distance, we selected Eno River State Park for our hike. What a contrast with Morrow Mountain. At the Eno River State Park, they offered hot black-eyed peas at the group gathering area, along with a choice of two different hikes. My desire was to go on the longer, 6-mile hike, but my friend Jim brought his second-grader with him. Because of the recent heavy rains, they were not allowing children on the longer loop for safety reasons. We did the 2½-mile loop instead.

Jim, Elijah and I started off the hike with hundreds of others. There were lots of children in the group ranging from ones in hiking backpack carriers, to 2-year-olds, to teenagers and up to oldies, like me. It was a beautiful, not-too-rigorous hike, and at the end of the hike, there was hot chocolate, popcorn and a fire with marshmallows and sticks upon which to toast them. It was a far cry from the rustic hike at Morrow Mountain, but it was also much more crowded. The number I heard, but have been unable to verify, was more than 800 participants there this year.

I expect to continue the new tradition next year, but have yet to decide on which park to visit. I hear that Lake Norman State Park has an easy hike each year for those who want to participate but don’t want to get into mountain climbing mode. My choice may again depend on which crazy person wants to go with me on a chilly Jan. 1.

Russ Stevens lives in Salisbury and more often is seen riding his bicycle around the town than hiking.

The runoff is on

When the rains come, runoff into the ditches is a natural occurrence  after the soil is saturated. Much of the... read more