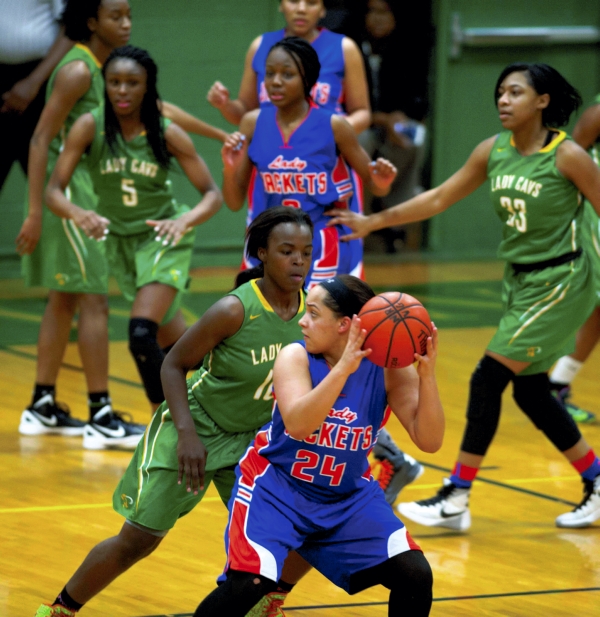 SPENCER — North Rowan over-passed a few times in Tuesday’s Central Carolina Conference opener, but each over-pass brought a small smile to coach Brian Lytton’s face.
As a coach, you’ll take over-passing over selfish every time, and North’s girls had some fun in rolling to a routine, 69-40, win against Lexington.
Nine Cavaliers scored, including reserves Tajah Oglesby, Payton Russell, Makala Lytton and Jordan Morrison.
“Everyone got to play in this game, that’s always good, and everyone was trying to help other people score,” said North senior Aliyah Farmer, who had 16 points. “We even passed the ball a few times when we could have just shot layups. We played as a team. We shared the ball.”
The springy Farmer scored 11 points in the first quarter, overmatching Lexington on the glass the same way she did Carson in North’s recent triumph in the Dale’s Sporting Goods Sam Moir Christmas Classic championship game.
North (9-4, 1-0) led, 20-12, after a quarter and by 38-23 at halftime. Special Washington, the senior who was Moir tournament MVP, enjoyed a nine-point second quarter.
“Yes, there were stretches when we didn’t look very good,” North coach Brian Lytton said. “But there also were stretches when we did look really good. The key for us is consistency. If we’re going to beat the good teams, we’ve got to eliminate the bad stretches.”
Kahari Sanders kept Lexington (4-8, 0-1) from getting blown out in the first half by scoring nine of her 15 points in the second quarter.
North held Lexington to six points in the third quarter and won going away, even with Washington and Farmer watching from the bench.
“The last four years, we’ve tried to instill the mindset of being up-tempo all the time,” Coach Lytton said. “We don’t want to lose that, but we’ve got enough experienced girls now that they can also slow down and be patient when they need to. That’s an important step as far as beating the really good teams.”
Washington hit three 3-pointers and scored 18 points.
Tre Allen, known mostly for her defense, nailed two 3-pointers. Aundrea Godfrey didn’t score until the fourth quarter, but then she had two buckets and two free throws in about a minute. Oglesby had a career game with eight points, including two long jumpers. Brianna White also chipped in with eight points.
North won its fourth in a row.
The Cavaliers will host unbeaten East Davidson on Jan. 15. That’s a game that will provide a major challenge for North. East Davidson has won the last two CCC titles. North’s lone league regular-season title came in 2006 when it shared the CCC crown with Salisbury.