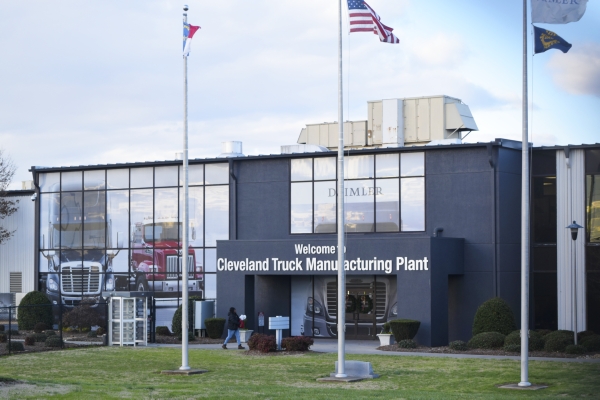 Freightliner laying off 936 in Cleveland In this file photo, a Freightliner employee works at the Cleveland plant on National Manufacturing Day in October, when the company hosted a celebration and tours. Josh Bergeron/Salisbury Post

CLEVELAND — Joia Bryant, an employee of the Freightliner Manufacturing plant in Cleveland since June of last year, said she woke up Monday to a surprise — and not a good one.

“I didn’t expect to get up this morning and get on Facebook and see that, like, we were being laid off,” she said.

Almost 1,000 workers are being laid off from Freightliner’s Cleveland Truck Manufacturing Plant.

Kim Genardo, director of strategic and economic development communications for the N.C. Department of Commerce, sent the Post the WARN letter that the department received from Freightliner. Companies are required to send the state Commerce Department a notice when mass layoffs are planned.

The letter stated that the mass layoff is due “to a sustained reduction in orders and diminished build rate.” The company’s letter says the layoff is “presently expected to be temporary.”

Some 936 workers will be laid off, including 666 assemblers and 107 utility team members. That’s about a third of the workforce at the plant

The last day of actual work for the employees will be this Friday, but the layoff officially begins on March 5, because that’s when the unionized employees will stop being paid.

Union employees affected by the layoff will still receive regular payment and eligible benefits from Jan. 8 to March 5. That’s in lieu of a notice required in the collective bargaining agreement, the company said.

Those employees will also receive payment for all accrued but unused vacation pay within seven days of March 5, unless the employee requests otherwise.

Other trucking companies have also reacted to decreased demand.

Last month, Mack Trucks Inc. announced its plans to lay off 400 people at its Pennsylvania manufacturing facility — more than 20 percent of the workforce there — because of weakened demand. Those layoffs are to take affect on Jan. 25.

And Volvo Trucks North America announced plans in December lay off 734 production workers, about one quarter of the workforce, at its New River Valley assembly plant in Dublin, Virginia.

According to just-auto.com, FTR Transportation Intelligence and Americas Commercial Transportation Research both reported weak Class 8 heavy-duty truck orders in November, which was unexpected. Class 8 trucks are one of the types of trucks that Freightliner specializes in. Orders fell to around 16,500, which was the weakest monthly total since September 2012 and the lowest November total since 2009.

Gary Lyles says not all employees at the Cleveland plant were surprised by the layoff, but they were caught off guard by the timing of it.

The signs where there around October, he said, but “we didn’t think it would happen this soon.”

Lyles, who lives in Kannapolis, said he’d heard from veteran employees, many of whom had been through previous workforce reductions, that a layoff may be imminent.

He said there was a lot of work in October, November and December — and a push to get it all done — and there was talk around the plant and within his team that layoffs could be around the corner.

Lyles has worked at Freightliner a little over a year and said he’d recently felt stable enough to buy a new truck — his first new vehicle in 15 years. When asked if he would go back if Freightliner recalls laid-off workers, Lyles said he’s already made phone calls to former employers and people he knows who could help him find another job.

Justin Webb, an employee since August of last year who is being laid off, said he heard anyone who was hired after May 2014 would be laid off.

Webb said before he started working at Freightliner, the company held a town meeting and assured everyone that rumors of layoffs were untrue.

“It’s really shocking to come back from Christmas break and New Year’s and find out that we only have a week left,” he said.

Webb said that although he thought Freightliner was a good employer, the possibility of being laid off is a risk that potential employees take.

“I’ve had family go through Freightliner. They’ve been in and out of there for 15 to 20 years now,” he said. “It’s a common thing. Layoffs happen there. It’s just a risk you take with working.”

Bryant said she knew about the possibility of layoffs when she applied for the job.

“I figured there would be one on down the line, but I didn’t think it would be this soon,” she said.

No effect on incentives

In November, the Rowan County Board of Commissioners approved a five-year tax incentive agreement with the Daimler North America plant. The company was planning an expansion that would cost about $38 million, and the agreement was projected to provide about $940,000 in tax incentives to help with the project.

The expansion did not create any more permanent jobs, but Daimler did agree to increase its minimum job retention requirement from 695 to 1,500. The total employment for the company was about 2,800 at the time, the company said. With the just-announced layoffs, that number would decrease to about 1,864.

Robert Van Geons, executive director of RowanWorks Economic Development, verified that the company would not dip below the job retention requirement.

“We are all working to meet with Freightliner officials to understand the layoffs’ depth and duration, and we’re putting together multiple agencies,” Edds said.

Among the included organizations are Rowan Works Economic Development, the United Way, the Employment Security Commission, the Rowan County Chamber of Commerce and Rowan-Cabarrus Community College.

Edds said Freightliner has been a “terrific employer for Rowan, but the layoffs are further evidence that the county needs to diversify the type and number of industries.”

The Post left messages for the plant manager in Cleveland and an official at Daimler’s headquarters in Oregon, but no one responded.

Here’s a link to the notice: http://bit.ly/RowanFreightlinerlayoffs

By Russ Stevens For the Salisbury Post How many times participating in something does it take to make it a... read more