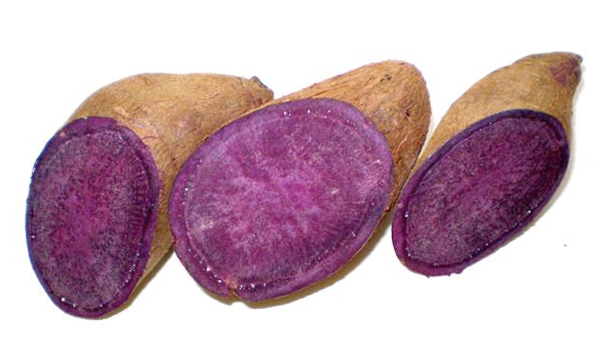 Purple yam or ube, is very popular in the Phillippines, where it is used in sweet treats. It may soon show up on American tables.

Now that we’ve hit a new year, what can we expect to be eating?

Probably the same stuff we always eat, but for some people, the new year brings a chance to try new things.

In turn, we’re going to be cutting back on food waste, turning to grass fed everything and looking for new sources of foods we crave, like fresh fish.

To top it all off, we’re going to make the food hot, hotter, hottest.

And when we get thirsty, we’ll be able to buy a can of wine. Maybe.

So, what are those in the know predicting?

Cutting food waste, using “ugly” produce, making use of carrot ends and broccoli stalks and whatever sorts of leaves and stems won’t hurt us. Leftovers will be consumed, not tossed, and we’re going to actually find a use for stale bread, like breadcrumbs or toast.

Speaking of stale bread, we are reinventing bread, looking for ancient grains, and retooling bagels, pizza and flatbread to be as grainy as our other breads. Artisanal is the word, crustier crusts, heftier insides. But mushy white bread will never go away in the south. Gotta have it for tomato sandwiches. A lot of people gave up bread during the anti-gluten fad. It’s coming back.

A renewed interest in Hawaiian foods has lead to the resurgence of Spam, that canned meat we love to hate. It’s showing up in sushi and as fries. And in other parts of the world, it comes in multiple flavors, including jalepeno and chorizo. Whole cookbooks are devoted to it. It’s a Spanmalicious world.

We all love ice cream, with chocolate as our No. 1 flavor. But there’s so many new flavors out there, it’ll chill you to the bone. Consider Sriracha (there’s your heat), lobster, summer corm, bacon, egg and cheese, salted caramel bacon. Did you even get to try the rolled ice cream? Spread ice cream flat on a super cold surface, let it refreeze, then roll it up like chocolate curls and place in a cup. That’s out already.

Sayonara, kale, and hello seaweed. The Specialty Food Association predicts seaweed will be in, replacing kale — maybe not inland — as the new green. It is packed with fiber, iodine, antioxidants and good fats, and it’s environmentally friendly. It’s not just for sushi anymore. Seaweed salad is hit and actually quite tasty. Texture is a bit odd. Just leave enough for the sea critters who rely on it.

Food trendsetters say we can expect ube, or a purple yam, to appear on doughnuts, ice cream and cheesecake because we like purple so much. Searching the web for this one produced a page of vividly purple foods, from cakes, ice cream, cookies, frosting to bowls of mashed purpleness.I saw purple rolls, purple biscuits and purple crackle cookies. It’s very popular in Filipino treats. It’s nothing like a purple potato that we’ve seen. Would love to play with them.

Just like last year, everything fermented is supposed to be hot. Now, in the South, we like to pickle cucumber, squash, okra, watermelon rind, eggs and pigs feet. Health advocates Dr. Chris Magryta and Dr. Chris Nagy have been preaching healthier eating all around the county, saying a healthy gut makes a healthy person. Eating fermented foods is helpful to our guts, because the bacteria in fermented foods will help with digestion. The Brits are now catching on to kombucha, a fermented tea drink. Whole bars are devoted to it. Sauerkraut is a fermented food, and so is kimchi, which is fermented, spicy cabbage from Korea. Kimchi is going to make its presence known this year.

Healthy fast food is the new trend. Chains are opting for non-GMO foods, cage-free eggs and more. Panera says it will do away with artificial flavors, colors, sweeteners and preservatives by the end of 2016.

More veggies. Even in restaurants, veggies are taking center stage. People are worried about hormone-laden meats, calories and cancer scares over processed meat. Look for more vegetable plates, stews and side dishes.Look for things like cauliflower steaks and zucchini noodles, and lots of roasting, grilling and charring.

Now, back to purple, We saw acai before, but now it’s taking breakfast, lunch, dinner, drinks and even ice cream to a new level.It’s another one of those superfoods, and there are entire websites devoted to acai recipes.

Says one such site: “The acai (ah-sigh-EE) berry is a grapelike fruit harvested from acai palm trees, which are native to the rainforests of South America. Acai berries are widely touted as a so-called superfood, with proponents claiming that they are helpful for a variety of health concerns, including arthritis, weight loss, high cholesterol, erectile dysfunction, skin appearance, detoxification and general health.

“Acai berries contain antioxidants, fiber and heart-healthy fats. They may have more antioxidant content than other commonly eaten berries, such as cranberries, blueberries and strawberries. But, research on acai berries is limited, and claims about the health benefits of acai haven’t been proved.”

Nevertheless, it’s already in juice and teas, so expect to see more.

Have you checked your condiments lately? The hot new sauces are from Africa, Asia and the Middle East. And it’s not just Sriracha, it’s chili sauces of all levels and chinese black bean sauce. It’s the Korean fermented chili paste gochujang.

You thought habaneros were hot? Then came the ghost pepper, and now the Carolinas are temporarily reigning as king for the hottest hot pepper — the Carolina Reaper, with 2.2 million Scoville Heat Units. A ghost pepper comes in at up to 1,041,427. The lowly jalepeno ranges from 2,500-8,000 Scoville units, so when we say hot, we mean, hotter than a jalepeno.

Whole Foods, the popular, pricey food store we wish would come here, has it’s own predictions

They say more people will go for gluten-free flour made from ancient grains, legumes and chickpeas.

Wine in cans will be for for people on-the-go.

Dehydrated foods, like jerky, dehydrated broccoli, Brussels sprouts and parsnip chips will also be showing up on shelves.

Grass fed everything. Including milk, eggs, yogurt, butter, cheese and protein powders. Maybe we should just go out and graze.

Uncommon meats and seafood. In the interest of reducing food waste, beef cuts like sirloin top, pork T-bone chop, as well as wild caught unfamiliar fish like paiche and blue catfish. Paiche is a very large fish from South America that is not farmed, like so much of the fish we prize today.