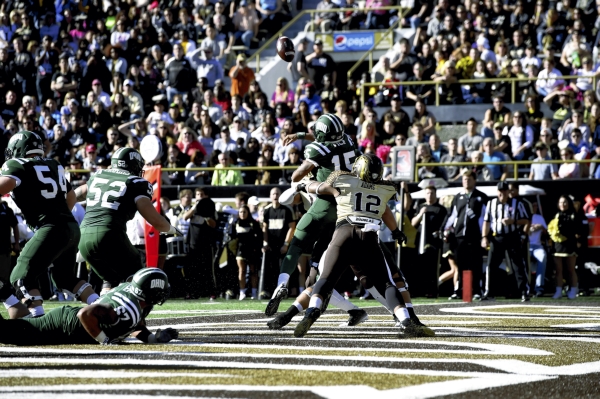 SALISBURY — Prior to the Bahamas Bowl on Christmas Eve, Western Michigan defensive end Keion Adams swam with dolphins.
Well, mostly the 2013 Salisbury High graduate petted, rubbed and hung out with dolphins. Adams kept his swimming to a minimum because he wanted to conserve his energy for the football game.
“We were out there in our wetsuits, goggles and snorkeling gear,” Adams said. “We were a little nervous at first because those dolphins are big. They were the same size as me.”
Adams, 20, enjoyed his first trip outside the country and contributed seven tackles. One of his tackles was a sack that helped Western Michigan’s Broncos beat Middle Tennessee, 45-31. It was the first bowl win in Western Michigan history. That meant a lot more to Adams than his fourth-quarter sack.
“The sack came pretty late,” Adams said. “My teammates flushed the quarterback out of the pocket, and I had a chance to make a play.”
Adams is a 6-foot-2, 260-pound junior. He plays right end in Western Michigan’s 4-3 defense. He hasn’t been timed in the 40-yard dash in a while, but he’s confident that he’s quicker now than when he was a terrifying, 220-pound linebacker/fullback at Salisbury High.
“I know my first step has gotten quicker,” Adams said. “That’s something I’ve worked on a lot.”
His life has been on a steady upward spiral since he made the surprise announcement that he was signing with Western Michigan. He had solid offers from Ball State and Howard and interest from a whole lot of others when he signed with Western Michigan.
“It’s worked out well for me,” said Adams, who has maintained a 3.0 GPA as a criminal justice major. “If I was going to accomplish my goals, I knew it would be best for me to get away.”
It’s 12 hours from Salisbury to chilly Kalamazoo, the city where Western Michigan is located, so Adams doesn’t get back home often. He did make an appearance at the Dale’s Sporting Goods Sam Moir Christmas Classic last week.
Adams played for Salisbury High from 2009-12 when coach Joe Pinyan was churning out powerhouse teams. Adams played in 16 state playoff games for the Hornets. Thirteen of those 16 were victories, including a 30-0 romp in the 2010 2AA state championship game.
“Coach Pinyan was a great coach, he surrounded himself with a great staff, and we had a lot of dedicated players,” Adams said. “That was a crazy time in Rowan County because West Rowan was going undefeated and winning state championships. It was always like Salisbury was West’s little brother, but we got one state championship and we came close to two more.”
Adams, who also shined in basketball and as a track and field thrower, had a banner senior football season for the Hornets. He made six interceptions, including an unforgettable, one-handed stab at West Rowan. He had two pick-sixes in Central Carolina Conference games. He broke up 10 passes, forced three fumbles, and accumulated eight sacks and 18 tackles for loss.
He added four touchdowns on occasional appearances on offense.
Adams didn’t get a chance to redshirt in the fall of 2013 as a college freshman. An undermanned Western Michigan squad needed him for depth right away.
“I’d gotten my weight up to 235 pounds by then, but I’ll never forget those early games against Northwestern and Iowa,” Adams said. “I didn’t have anywhere near the upper-body strength of their offensive linemen, and they were throwing me around. I did my best to hold my own and I did make a play here and there.”
Western Michigan was 1-11 that season and had one of Division I’s worst defenses.
The big jump for Adams — and the program — came between his freshman and sophomore seasons. Strength and conditioning coach Dan Nichol and defensive line coach Vinson Reynolds pushed Adams. Nichols demanded Adams’ best effort in every weightlifting session. Adams gave it.
“The university’s food plan is very good, and with the coaching you get here, you can throw on some solid pounds,” Adams said. “You really need that weight because your body sustains a lot of hits and a lot of damage every Saturday.”
Adams reported for his sophomore season in 2014 at 260 pounds. Since then, he’s been able to assert himself on the defensive line in the Mid-American Conference. Adams was a part-time starter as a sophomore.
His role expanded as a junior this season. He made 41 tackles and had 10 tackles for loss and 5.5 sacks. Western Michigan went bowling for the second straight season and finished 8-5.
Western Michigan was good. Even in the losses to Ohio State and Michigan State, two of the nation’s best, Western Michigan put up a fight.
“Ohio State was an amazing experience,” Adams said. “I’d seen it on TV, but it’s different when you see 106,000 people in scarlet and gray in person. It motivated me more than anything. Sometimes you try to shock them and shut them up. Sometimes you just pretend they’re cheering for you.”
Adams should hear plenty of cheers in Kalamazoo next fall as a senior.
“We’ve come a long way here in two years,” Adams said. “There was a lot of outside noise when we were 1-11. We kept our heads down, we never lost belief in ourselves, and we stayed with the process.”