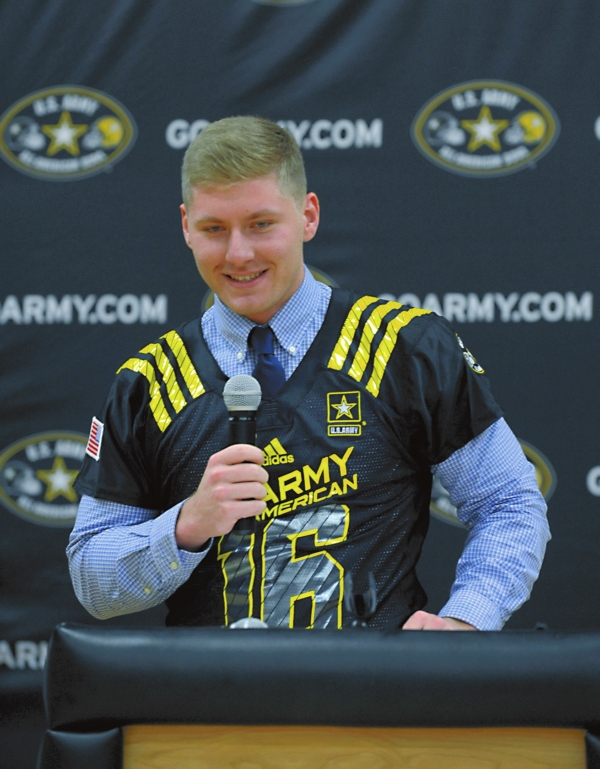 South Rowan punter Marshall Long is about to have something in common with Alabama’s Heisman Trophy winner Derrick Henry, Rose Bowl hero Cristian McCaffrey, and NFL stars such as Andrew Luck and Odell Beckham Jr.
There’s a lengthy list of prep standouts who have played in the Army All-American Bowl in San Antonio, including 299 who became NFL draft picks and 73 who were first-round picks.
Long will be joining a distinguished crew this Saturday when he punts for the East team in the 16th annual game. It will be easy to watch him. The game will be televised by NBC, live from the Alamodome at 1 p.m. EST.
“Back in the summer when they announced I’d been picked for the game it seemed like it would take forever to get here,” Long said. “But the time went by quick. Now it’s here, and I’m excited.”
Long flew from Charlotte to San Antonio yesterday afternoon to check in to the Grand Hyatt Hotel.
There will be a week of banquets, practices, events, competitions and community service leading up to Saturday’s game.
It’s a huge honor for Long to be in historic San Antonio.
The U.S. Army starts with a million or so candidates, trims the list to 400 finalists, and then picks 90 to play in an all-star game with an East vs. West format.
The 45 East players include three from North Carolina.
Dexter Lawrence, a Wake Forest High defensive lineman headed to Clemson, was recently named the state’s defensive player of the year by the Associated Press. Linebacker Josh Brown from 4AA state champion Mallard Creek is headed to Florida State and is another household name.
Long, 6-foot-3, 205 pounds, made the NCPreps.com All-State team, but he’s nowhere near as famous as Lawrence and Brown. That’s partly because he’s a punter and partly because he played for an 0-11 team. But he’s earned his place. He had the best punting season in Rowan County history — averaging 46.5 yards on 57 punts. One punt traveled 75 yards.
“Just a lot of hard work for several years,” Long said.
National Signing Day is Feb. 3. Long has a full scholarship offer from Virginia Tech, likes Blacksburg and has visited the school multiple times. That’s probably who he’ll sign with.
The only thing that could change his mind would be a scholarship offer from Georgia, which has expressed a lot of interest in having him on the team but has yet to offer a scholarship.
New Georgia coach Kirby Smart is still putting his staff together.
“I’ve been talking to Georgia about once a week, but it’s been hectic for them right now,” Long said. “They haven’t hired a special-teams coach yet.”
Long hasn’t played in a competitive game since Nov. 6, but he’s tried to stay sharp the last two months.
“I go out and kick in the South stadium three times a week,” Long said. “It’s like my season never ended.”
Long flew to San Antonio with his father.
South coach Daniel Yow will fly out to join them on Thursday. As Long’s coach, Yow will have an opportunity to take part in clinics and seminars as well as attend Saturday’s game.
The game will be well-attended. It attracted 35,687 fans last January.
While the size of his audience will change considerably, Long’s goals will stay simple.
“Obviously, this is a once-in-a-lifetime thing,” Long said. “I just want to have fun and do my best.”
•••
It’s possible Rowan County will have another player in the game next January.
North Rowan linebacker/defensive end Zion DeBose, the Central Carolina Conference Defensive Player of the Year as a junior, will be taking part in the All-American Bowl’s National Combine that starts on Thursday.
DeBose already has a number of offers, including East Carolina, North Carolina, NC State and Charlotte. He’s one of 600 players invited for evaluation by the U.S. Army All-American Bowl Selection Committee.