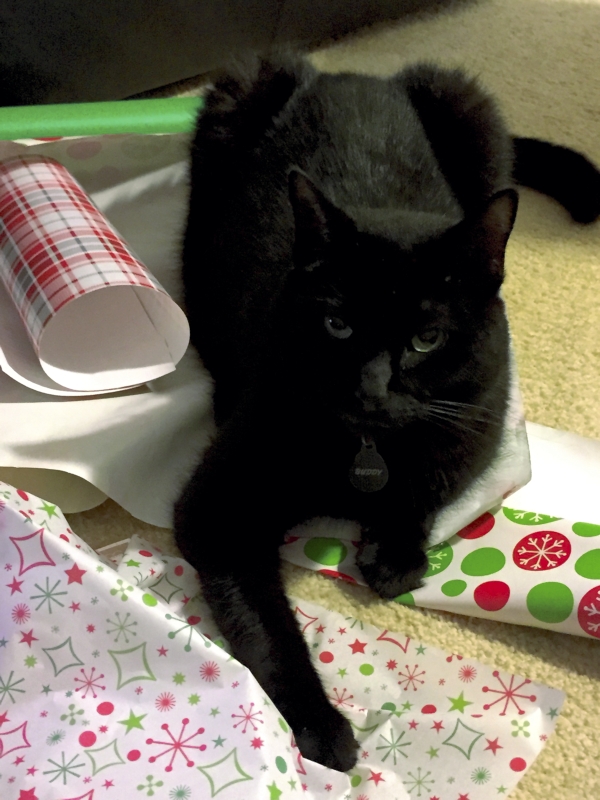 Submitted photo Buddy, a cat belonging to Alison Veros, was killed by two dogs that have been running loose in the Fulton Heights neighborhood since October.

On Dec. 28, Alison Veros let her cat Buddy outside as she typically does in the mornings. Ten minutes later, as she was getting ready for work, she heard the cat screaming intensely from outside.

“So I ran through the house and opened up the back door to find two dark-colored pit bull mix dogs standing in my backyard with my cat in their mouths playing tug-of-war with it,” Veros recalled.

Two dogs have been roaming around killing cats in the Fulton Heights neighborhood in Salisbury since October.

Tamara Sheffield, a community volunteer and resident of Fulton Heights, said five different families have contacted her about their cats being killed by the dogs.

“Too many crying families have said, ‘I need help. Can you help us get in touch with somebody who can move the needle on this and get it fixed?’” she said.

Veros was one of those people who contacted Sheffield.

After the dogs trotted away from her backyard, Veros and her son took Buddy to an animal hospital where Buddy was in the intensive care unit for several hours before he died.

“Our family is just heartbroken and sickened because we lost our family member, being our cat Buddy, who was just so special and a huge part of our lives,” Veros said.

Sheffield said it is obvious that the dogs are aggressive, and they put the whole neighborhood in danger — from pet cats to small children.

“Clearly these dogs are aggressive whether they’re someone’s pet or not. If they’re out roaming loose and killing other animals in the neighborhood, clearly they’re aggressive,” she said.

Veros said the dogs were dark-colored pit bull mixes of average build. One of the dogs had some white fur on its chest. She said the dogs did not look underweight or neglected. One of the collars was black with something similar to studs on it. The only thing Veros remembers about the other collar is that there was some type of red coloring on it.

It is not clear whether the dogs belong to someone in the neighborhood, but since the dogs have collars, the neighbors have assumed that they must have owners that are nearby.

Theresa Pitner, a board member of the Fulton Heights Neighborhood Association and dog trainer, said she does think the dogs belong to someone in the neighborhood who are letting the dogs out every day.

Pitner said it seems like the dogs are purposefully killing just as a canine behavior.

“What’s happening is, when a dog doesn’t have any kind of direction in the house, it almost turns feral,” she said.

Veros said she and other neighbors have contacted the Salisbury Police Department and Rowan County Animal Control. Animal Control has set traps and patrolled the area looking for the dogs, but the neighbors said they have not seen much in terms of results.

“We, as a family, personally feel that all that could be done isn’t being done,” Veros said.

Maggie Blackwell, mayor pro tem for the Salisbury City Council and resident of Fulton Heights, said the city and county have been working hard on the problem. She said she contacted Lane Bailey, Salisbury city manager, to develop a plan to deal with the issue.

“I told him since this has evolved into a big issue, I think we need a planned approach and somebody to take ownership,” she said.

Blackwell also said code services and the police department had stepped up their patrol of the neighborhood to search for the dogs.

At this point, neighbors like Veros just want the dogs to be found.

���It’s gone on for too long and it needs to stop,” she said. “We can’t keep losing our family pets. We can’t keep suffering from property damage and the possibility of these dogs hurting people in addition to our pets.”

Veros said she was told by the police department to call 911 if the dogs are seen in the area.