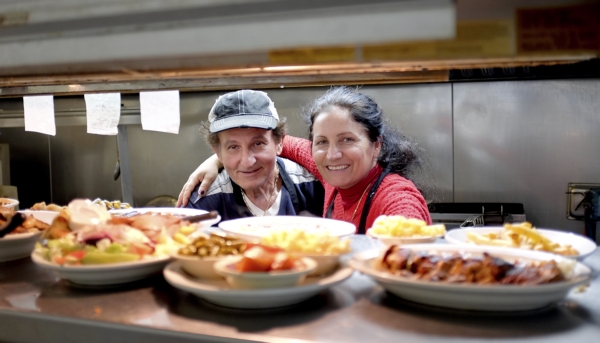 Hugh Fisher/For the Salisbury Post Five months after closing Greg's Family Restaurant in Rockwell, Greg and Agne Kakavitsas reopened after many of their customers said how much they missed Greg's cooking.

ROCKWELL — Some would say that the American dream is working hard, making a name for yourself, then retiring and enjoying life after your career is over.

But what happens when you find out that your career was more fun than retirement?

Six years ago, Greg and Agne Kakavitsas purchased a former seafood restaurant on N.C. 152 near Rockwell.

After operating it under its former name, Anchor House, for five years, they renamed it Greg’s Family Restaurant in 2014, after an extensive remodeling project.

Greg Kakavitsas started cooking in restaurants as a teenager after moving to the U.S. from Greece. He worked his way up from the kitchen to managing and owning restaurants around the Charlotte area.

That career started 55 years ago. “I’ve seen everything!” Greg said. “Charlotte was a small town. I saw (Interstate) 77 being built, I saw the skyscrapers being built. A lot of history.”

And the toils of cooking day in and day out were taking their toll. Agne, his wife, saw it. His family encouraged him to hang up his apron.

The July 5 announcement on the restaurant’s Facebook page brought well-wishes from customers, but a lot of sadness as well.

Tiffany Dockery Beaver wrote: “We will miss your wonderful food and the way you always made us feel like family.”

Gina Basinger posted to say another customer was “in tears because she won’t get to see you all the time and now no more of Greg’s yams and all. She said he would have to visit you at home to get her favorite foods.”

Months later, Cheryl Sloan Cornwell posted: “We had many family gatherings there … We were so sad when they closed earlier this year.”

The summer passed, and Greg traveled with his wife, spent time with family, built a new patio at their home and helped with the real estate business his wife owns.

But, after nearly six decades in the kitchen, Greg realized that, as he put it, “Cooking is in my blood.”

“He was missing this place so bad,” Agne said, standing beside a booth at the newly-reopened Greg’s Family Restaurant on New Year’s Eve. “I would ask him, ‘What is wrong?’ And he would say, ‘I’m ready to go back to work.'”

Running the restaurant Greg’s way is time-consuming work, but fans say the results are worth it.

The massive dinner menu includes marinated chicken and beef, steaks, pasta, Greek dishes such as gyros, sandwiches and pizza – plus the entire Anchor House seafood menu, which Greg said he keeps for longtime customers who still love it.

“I’m just like everybody else. One day, I want one thing, the next day I want something else,” Greg said. “The good news is, we have everything here.”

Greg said the decor, as well as the menu, are meant to bring in people who want to enjoy their food and their friends, spending quality time over a family-style meal.

“This restaurant isn’t where you go, get something in the window and keep going. This is a place for you to sit, be comfortable, and enjoy yourself,” Greg said.

Since the couple reopened the restaurant on Dec. 17, “my wife tells me I look younger,” Greg said.

And Agne, although she didn’t want to see Greg worn down by the long hours and hard work, said she supports her husband and the career he loves.

“I was reading all the messages on Facebook, where people say they missed the place,” Agne said. “And for us, it’s not about making money. It’s seeing happy faces and seeing people we know.”

Now that Greg’s Family Restaurant is open once more, those Facebook fans are once more praising Greg’s cooking.

“We’ve been here a little over six years now, and it’s been a good place for me. It was a lot of people’s favorite place,” Greg said. “We’ve seen thousands of people come in the doors during the last six years, and it’s been great.”

But after almost 56 years of cooking, the day will come again when Greg hangs up his apron – for good, this time.

Although they’re not in a hurry, Greg and Agne say they are looking for a buyer who will keep the restaurant as it is now – “a good owner who knows good food,” Greg said.

Ideally, this new owner would want to keep the family restaurant’s menu more or less intact, and would keep the atmosphere as it is – warm and inviting, as suited to family dinners as it is to birthday parties, anniversaries and reunions.

“I’d like to find somebody very special to run this restaurant,” Greg said. “I’m not going to give it away unless I find someone who can run it right, make something very special of it.

Laughing, Greg went on: “I live next door, and I want to come here myself!  I want to see the faces, the people – to sit back, have coffee and talk to my friends.”

Reopening a restaurant after it has been shut down for five months isn’t easy. Some of the equipment needed servicing. The suppliers of soft drinks and food had to start back up. Some of the old staff returned, but others had to be hired.

But Agne said the joy of seeing their friends in the restaurant again is worth it.

“This life is short,” Agne said. “Thank God, we have all we need. And this is the reason I jumped back into the kitchen with Greg.”

“We feel like this is our place,” Agne said. “I won’t mind if someone else owns it, but for us, it’ll be Greg’s restaurant forever.”