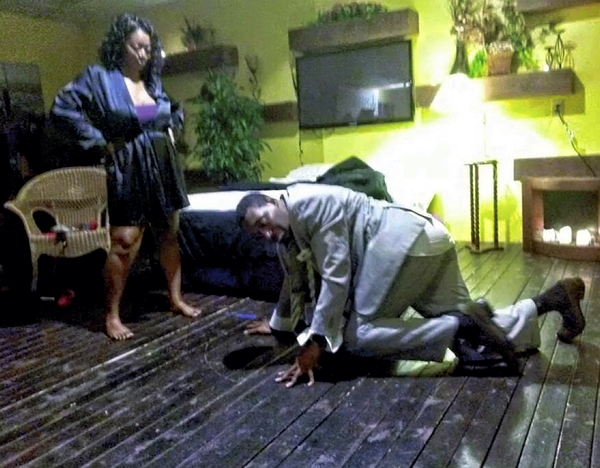 Submitted photo Joseph "Jojo" Gardner III is bringing stage plays from his performance group Ghop to Salisbury. "Trapped," the first play the group will be performing, is based on recording artist R. Kelly's "Trapped in the Closet" series.

A chef and entertainer out of Greensboro is getting ready to shake up the theater arts scene in Salisbury.

Joseph “Jojo” Gardner III, the founder and CEO of GHOP Actors, will be bringing his stage plays to Salisbury in the upcoming year.

Gardner filled in for an actor in the stage play “Grand Slam,” which was performed at Eastsquare Artworks on the weekend of Oct. 17. The play was about a baseball player in the Negro Leagues in 1954, and Gardner played Fat Cat, one of the villains of the play.

After performing in the play, Gardner and the officials of the Renaissance Arts Program, who sponsored “Grand Slam,” came to an agreement for Gardner to bring his stage plays to the area.

Gardner himself is a writer, director, actor, chef and comedian, and he said Ghop allowed him to encompass all of his talents into one entity.

Ghop is an acronym for Gardner’s catering business, called Gardner’s House of Pasta: A Taste of Black Italy.

“I wanted to do something that brings people at the table,” Gardner said. “Why not feed them and give them entertainment at the same time?”

The group will be performing “Trapped,” Gardner’s version of recording artist R. Kelly’s “Trapped in the Closet” series, at the Firewater Restaurant and Lounge. The first performance will be of chapters one through five and more chapters may be added if enough people go to see it.

Gardner said he has mastered the art of illusion in order to perform intimate scenes. He said he is not afraid to do things on stage that get people talking.

“I always try to keep my stuff radical. I don’t mind doing same sex items, and then they come out of the same sex item and they get saved,” he said. “That’s the kind of stuff that we live with today.”

Gardner also said he likes to get the audience involved in the performance.

“We may pull audience members up on the stage during some of the scenes that they’re not even prepared for,” he said.

Actors and actresses are encouraged to talk to the audience and improvise.

Gardner said he enjoys taking in actors and actresses that others may not cast and molding them into great actors.

“I try to make sure that every actor and actress in my group has their debut, that they have their moment so that somebody can say, ‘Listen, I need you to come play this part,’” he said.

Performers in the Salisbury area are encouraged to join the group.

Other performances coming to Salisbury include stage play documentaries “Malcolm X, ‘By Any Means Necessary’” and “Joe Louis, ‘The Brown Bomber.’”

Gardner said tickets will be around $10-$15 for the first few stage plays performed in the Salisbury area. Tickets are usually $25-40, but Gardner said he wants the community to get a taste of what they are in for with his group before they start paying more.

“When they see ‘Jojo’s version of,’ they’ll know it’s connected to a good production,” Gardner said.

“Trapped” will be performed on March 12 at 8 p.m. at the Firewater Restaurant and Lounge at 122 Avalon Dr. in Salisbury.