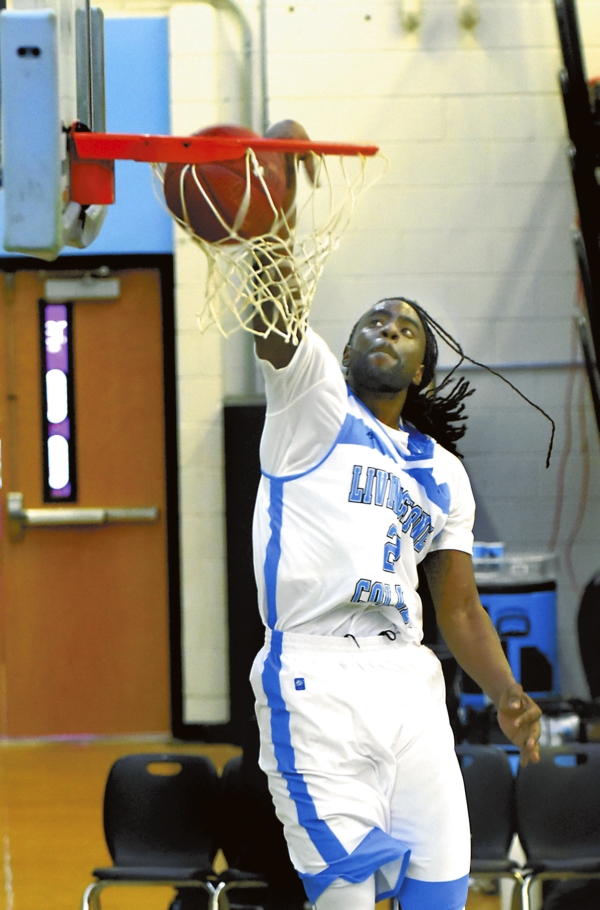 SALISBURY — Livingstone coach James Stinson is the first to admit the Blue Bears aren’t as talented as they’ve been in recent seasons, but he still believes his team can make some noise.
“We made passes today that probably would have led to dunks last year, but today they were turnovers,” Stinson said. “We don’t have guys like Hakeem Jackson and Eric Mayo going up to get the ball now.”
Despite a few unnecessary turnovers. Livingstone got off to a good start in CIAA play on Saturday by beating Lincoln, 84-70, at New Trent Gym. It was mostly empty New Trent Gym, as the students haven’t returned yet from Christmas break.
“There were a lot of things we could’ve done better, but we’re satisfied with the win,” Stinson said. “It was a win against a very well-coached team. John Hill does a great job, and his bigs executed on ball screens very well. They gave us a lot of trouble with their set plays.”
Livingstone was 1-5 in November — all on the road. Since veterans Ty Newman and Eric Dubose, both preseason All-CIAA players, returned to the court in December, the Blue Bears are 5-1. They leveled their season mark at 6-6 on Saturday when they finally made their home debut.
Nine Blue Bears scored Saturday. Stinson wouldn’t mind seeing 13 score.
“We try to wear teams down with numbers,” Stinson said. “We want our 13th guy to be as good as the other team’s ninth guy. As all our guys become acclimated to each other, we’ve got a chance to be a good basketball team. It just takes a while for guys like Newman and Dubose to mesh with the new faces.”
Livingstone got off to a quick start on a 3-pointer by returner Daryl Traynham and a three-point play by Newman and built a 37-24 halftime lead.
The Blue Bears led by 20 points with 10:56 remaining after Dubose made a jumper, but Lincoln (2-10) never let Livingstone turn it into a romp.
Newman had 23 points, six rebounds and four assists to lead the Blue Bears.
“If he was little more selfish, he could have scored more,” Stinson said. “He’s all about the team.”
Traynham scored 12 points and had eight assists.
“He’s running the team and pulling our young guys along,” Stinson said.
Robert Flint, a veteran who has always been in a backup role, stood out on Saturday, shooting 3-for-3 on 3-pointers and committing zero turnovers.
“He’s played his role well for years, and now he’s going to get more opportunities,” Stinson said. “He’s a stabilizer. They gave him some space today, and he rose up and knocked shots down.”
The stat sheet credited Livingstone with 22 assists on 30 made buckets. That’s a terrific percentage of assists.
“We were only having four or five assists per game early in the season because guys were trying to do too much,” Stinson said. “We’re sharing the ball better now.”
Joshua Davis led the visitors from Pennsylvania with 19 points.
Dubose had 12 points for the Blue Bears, while Nasir Austin and Cordero Holt added 10 each.
Newman is shooting 56 percent from the field since returning, and he’s capable of leading the Blue Bears a long way.
“We have veterans who know how to win and know when it’s time to make a push,” Stinson said. “This team is still figuring out who it is, but we’ll establish an identity.”
Livingstone is home again on Tuesday, taking on CIAA foe Bowie State.

Clemson playing for title, and for history