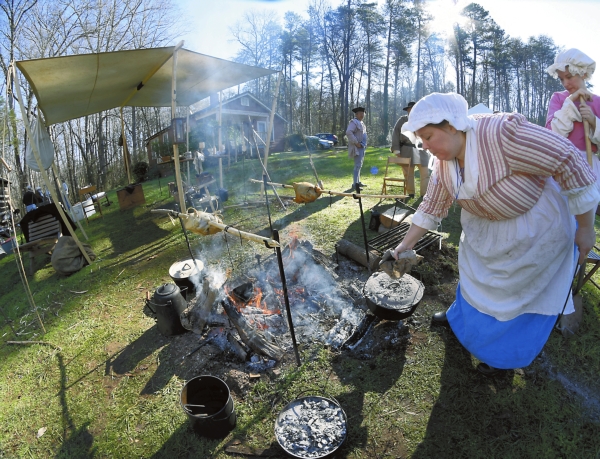 The German Christmas Celebration at the Old Stone House. Misty Paris and Stephanie McCoy, in back, are cooking potatoes and onions, an apple pie in the Dutch oven, and roasting two chickens over the open fire. They are part of the First Regiment of the Mecklenburg Militia. photo by Wayne Hinshaw, for the Salisbury Post

A celebration of ages: Christmas at the Old Stone House

It’s Christmas at the Old Stone House in Granite Quarry. Fires are set up around the yard, roasting chickens or warming a bubbling pot of apple cider. A fiddle begins to play and two girls in colonial garb whirl around in a flurry of skirts and aprons.

Kaye Hirst, executive director of the Rowan Museum, stands by a fire and invites guests to burn a sprig of holly in the flames. It’s a New Year’s tradition, she explains.

“You’re burning away your troubles from the previous year.”

The grounds of the Old Stone House are packed with people, listening to bits of history from volunteers in caps and tricorns, lining up for a tour, wrapping corn husk dolls or perusing dried herbs and cloth under a tent.

For Hirst, the German Christmas Celebration at the Old Stone House is tradition. She’s a direct descendant of the Brauns, the family that moved to Rowan County and built the house in 1766. She remembers when the museum opened the house when she was a freshman in high school.

“I never would have imagined I’d have the keys in my pocket,” she said, laughing.

Hirst has been helping out at the Christmas celebration for all of its 31 years, and says she always makes the wreath that hangs on the front door. When it started, the German Christmas Celebration was held before the holidays, but a few years ago the museum decided to hold the event after the holidays.

Historically, Hirst says, the Braun family and other people of the time would have started the holidays on Christmas Day and celebrated through Epiphany, which falls on Jan. 6. The other reason the museum switched the date was so that more people could attend.

“There’s so much competition for your time before Christmas,” Hirst said.

And having an event after Christmas gives people something to do in the post-holiday lull, when they’re still sleepy from good food and may still have visitors.

Every year, Hirst says, she sees people she knows. The girls who work the loom in an upstairs window went through a camp Hirst runs. And many of the visitors come year after year.

“It’s tradition for a lot of people,” she said.

But she loves to see new faces.

Kara Barnette and her family were waiting in line for a tour of the house. They just moved to Rowan County in May from Rocky Mount.

“My husband and I are big history buffs,” she said.

Barnette and husband, Tim, take their children Anna, John and Christopher on regular trips to see historical sites, and Barnette says the entire family is excited to learn about Rowan’s history.

They’re familiar with touring old houses or seeing dramas, but Tim says it’s rare to visit a place like the Old Stone House where visitors are encouraged to interact. Learning about history or touring a site is one thing, he says, but getting to do things like dip candles, sample food or talk to actors is a different way of learning, entirely.

“It adds another dimension,” he said.

The Barnettes have lived in a few different states, but Kara loves the history she’s found in North Carolina — there’s such a rich past and a wealth of heritage that stretches back to the very first European colonies.

Chris Thomas was standing under a tent, watching his wife, Susan, and daughters, Saybrin, 13, and Saharra, 17, dip candles. He looked over at the classic face of the house.

“I remember walking in there when I was a kid,” he said.

Thomas is from Faith, but said that aside from trips as a child, he’s never been back to visit the house.

“We pass it all the time and just never stopped,” Susan said, carefully lowering a wick into a cup of hot wax.

She said today they were driving by and saw a goat tethered in the yard and decided to see what was going on.

“I love it, this is so cute,” Saharrah said.

“As I’ve gotten older it seems that I learn more than I did before,” she said.

Cook travels around to different historical re-enactments and takes photos for fun. She’s been all over the state, but lately, she says, she’s been keeping a little closer to home.

“There’s a lot more going on in town now than what we were aware of,” she said.

Each year, Hirst says, they have returning volunteers — like the weaving girls — but they try to invite new people, as well. This year, Hirst was approached by the Hopewell Militia, a re-enactment group based on a real militia from Mecklenberg County. Saturday, they baked pies, roasted chickens and fired off loud shots.

The group is run by Matt Paris, who has historical ties to the area — his ancestor fought in the Battle of Guilford Courthouse. Paris has been working in re-enactments since 2000, and he and other militia members have an appreciation for the hard work settlers put in to survive and carve a life out for themselves.

Saturday brought clear skies and firmer ground than previous weeks — it also brought out a crowd. The yard filled with people as soon as the event opened, Hirst said, and stayed busy for the rest of the morning.

She hopes that today will be just as successful. The German Christmas Celebration at the Old Stone House is open today from 12 p.m. to 4 p.m. Admission is $5 for adults and $3 for students.

The latest addition to the Rowan County Airport is the product of a changed business climate. Steve Setzer says he... read more