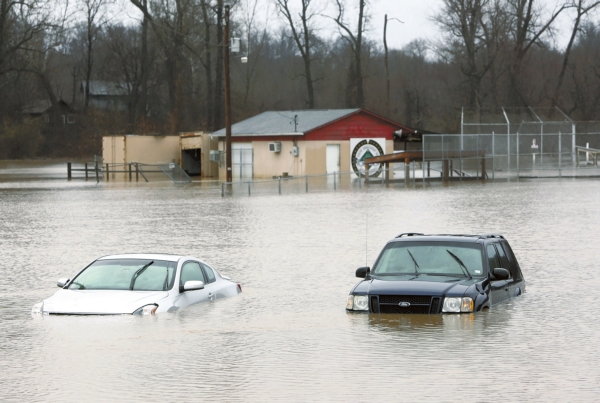 Dart to the deluge of rain that has soaked much of the country for the past week. In Rowan, this meant swollen creeks and flooded yards. In the Midwest, the downpour lead to death and destruction. Most of the 14 fatalities in Missouri were in cars that drove into water-covered roads. Five international soldiers from Fort Leonard Wood died after their vehicle was swept away by floodwaters; two other people were swept to their deaths in similar fashion just miles away. One man was electrocuted when his tow truck came in contact with a downed power line. Illinois deaths included a family caught in a rain-swollen creek while trying to cross a low-lying bridge. The National Weather Service warns people to stay away from surprisingly forceful flood waters. Turn around, don’t drown.

Laurels to the optimism of New Year’s resolutions. Kim Kardashian vows to lose her baby weight. Bill Nye the Science Guy is calling for renewable energy for all. Larry the Cable Guy wants to continue his 2015 streak of not working out. Do these annual pronouncements really accomplish anything? Psychology Today says only around 8 percent of those who make a resolution are successful — though the chance of sticking with it increases tenfold if you write down your resolution. Experts say all this focus on our weaknesses can get the year off to a daunting start. Instead, try taking stock of the things you did well in 2015 and plan to do them even more, one writer suggests. Either way, you’re taking stock of your life and focusing on setting goals, a quantum leap ahead of just going through the motions another 365 days.

Dart to the unfortunate uncertainty about the future of the Dunbar Center, heavily damaged by fire a year ago this week. Dunbar High School opened in 1958 on the site of what had been East Spencer Negro School. Despite the passing of 12 months, nothing has been done to clean up the historic structure since the fire. Even the cause remains undetermined. Officials haven’t confirmed whether the fire was set to destroy the building or to keep trespassers warm. Town officials have their hopes pinned on a federal grant that may be available through the EPA’s Brownfields Program, but at best that would provide $200,000 to assess the situation. East Spencer, which so desperately wants to build a better future, is burdened with a major structure that’s sitting damaged and unusable. Better things must be ahead in 2016.