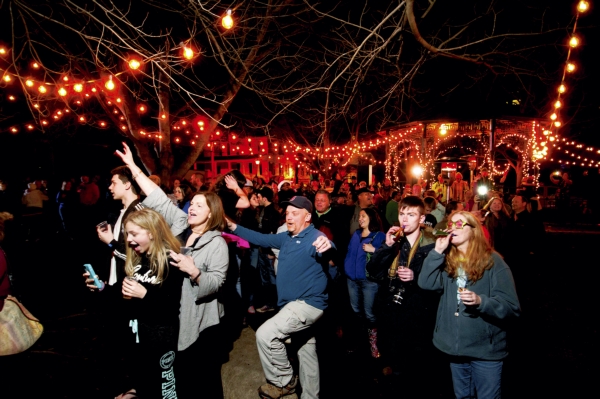 Jon C. Lakey / Salisbury Post The crowd watches the screen during the countdown to midnight at the New Year’s Eve at the Bell Tower celebration.

The countdown begins two minutes to midnight with the celebration at Times Square projected onto a screen. From the gazebo at the base of the Bell Tower on West Innes Street, Mayor Karen Alexander starts counting out loud when the clock reaches 20 seconds, the crowd yelling each number out with her. At the stroke of midnight, a bell rings out across the grounds.

It was a successful year for New Year’s Eve at the Bell Tower. Mollie Ruf, promotions director with Downtown Salisbury Inc., estimated that nearly 1,000 people stopped by the Bell Tower between 8 p.m. and midnight. That’s more than triple the estimated 300 who turned out for last year’s event.

“Three years ago it wasn’t going to happen,” Koontz said. “So the city stepped in and decided to make sure it happened.”

Traditionally, Koontz says, people met at the Bell Tower just in time for the countdown to midnight and rang a bell. When the parks department took over three years ago, the party lasted an hour. Now it’s transformed into quite the party.

“We wanted to expand it, make it more of an evening event,” Koontz said.

The 2015 New Year’s Eve at the Bell Tower was a four-hour event with games, live music performed by Live House and DJ Doublebass, free coffee and hot chocolate, goodies and outdoor heaters.

For most of the night, the projector streamed, courtesy of Fibrant, Michigan State playing Alabama in the Cotton Bowl — the feed flipped to Times Square a little before midnight. Novant Health Rowan helped sponsor the party this year, which allowed Koontz to hire an even planner to spruce up the gazebo and light up the Bell Tower — purple in honor of Novant’s support.

By 8 p.m., people were already crowding the hot chocolate line and snagging hats, glittery sunglasses, glow sticks and poppers from a nearby table. Kids played cornhole, giant checkers or bowled while their parents watched the game.

Couples ventured under the strings of lights hanging from the trees to get closer to the band. In the background, the Bell Tower glowed against the dark.

The event attracted a myriad of people: siblings, couples, groups of teens, parents with children, grandparents and a few who were just passing through. All were excited about the chance for a fun night out.

“We’ve had so much rain that I think tonight people just want to get out,” Koontz said.

Sarah Powers agreed. She said she thought it would be a good idea to get her two children, Ella and Lane, both four, out of the house. Bundled up against the chill, the two played cornhole while Powers and her husband, Craig, watched from the sidelines.

The kids normally go to sleep at nine, and she’s hoping the event will tire them out. In 2016, Powers says, she plans to be more organized.

Firefighters from Salisbury Fire Department were on hand in case there was an emergency. Stephen Carter says that the department has been standing by at the celebration ever year since the city took it over.

“If we gotta bring in New Year’s, this is the way I like to do it,” Carter said — with the community.

Others were just passing through. Leslie Hayes and Freddy Cuthbertson swung by the event on their way home from church.

“We weren’t ready to go home yet,” Hayes said.

One of the band members of Live House also plays at their church, she said, and they came out to hear him. Cuthbertson said that he wished there were more events like this for kids around Salisbury. Hayes agreed.

Cuthbertson says that for his resolution, he’d like to be more involved in youth programs.

If she’s focused, everything else — weight, health, time management — will fall into place. And she says that she and Cuthbertson both plan on putting God first in the new year. They arrived shortly after 8 p.m., and said they planned to head home soon to celebrate the new year quietly.

Sisters Macayla Upright, 18, and Mckenzie Upright, 16, were planning to stay the whole four hours. They said that normally they spend the new year at home, but though New Year’s at the Bell Tower sounded like a better way to spend the night.

“I guess we wanted to have some good clean fun,” Macayla said.

This year, they’re both keeping their resolutions simple. Mckenzie wants better grades in school, and Macayla wants to have a full year.

She said she’d love to go skiing or go hiking on the Appalachian Trail. Mckenzie has other plans. There’s a superstition that whatever you do on New Year’s Day you’ll be doing for the rest of the year, she says.

“So I plan on staying in bed and eating a lot of ice cream,” she said.

As the evening wore on, more people packed the tower grounds and parking lot. A space cleared out in front of the gazebo and dancers grooved to “The Cha-Cha Slide,” “The Cupid Shuffle” and “The Electric Slide.” Even if they didn’t join in the lines, people tapped their feet and swayed their hips where they were standing.

“It’s so exciting for me to see everyone in our community come together,” she said.

Nearby, Mark Perry watched the dancing with a smile on his face.

“I think the diversity of age is unbelievable,” he said. “Look around, you’ve got young, old and everyone seems to be having fun.”

Perry and wife Barbara have been going to New Year’s at the Bell Tower for twenty years, on and off, they say. They haven’t been since the event was taken over by Salisbury Parks and Recreation, and say the improvement is huge. They liked the old celebration, but it was a small event that drew a small crowd — this year it was wonderful to see such a large crowd.

“If you look around and you don’t know people, that’s a good thing,” she said.

The Perrys live on Bank Street, and love coming out for events in downtown Salisbury, and they love seeing the community come together.

Perry, who’s retired, says he plans to spend the new year golfing, getting more exercise and becoming more involved in the community. Barbara says that she doesn’t really make resolutions any more — she feels that she, and others her age, have one goal as each year changes hands:

“We live for every day as well as we can,” she said.

“They have treated us like family”: Gold Hill church…