‘Santaville’ a successful fundraiser for hospice 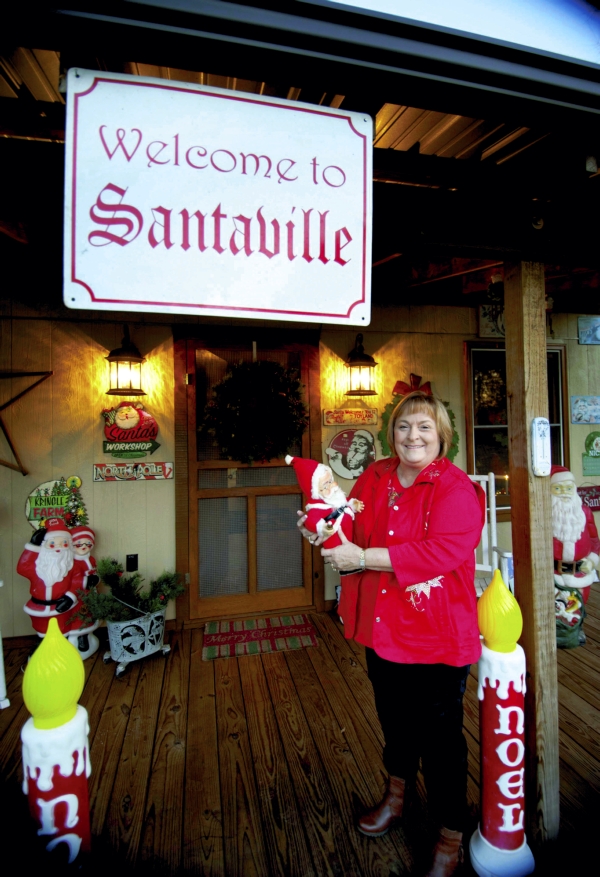 JON C. LAKEY / SALISBURY POST Judy Barnhardt holds the first Santa Claus that she received as a child from E.B. Grady who ran the Coco-cola bottling company in Concord where her mother worked. Barnhardt has turned her collection of 9,000 Santa Claus items into a fundraiser for Hospice. Monday, November 23, 2015, in Concord, N.C.

CONCORD — Judy Barnhardt is still basking in the glow of the holiday season.

Truth to tell, the woman who owns some 9,000 Santas pretty much basks in it year-round. But she’s particularly pleased about a successful fundraiser she hosted earlier this month. She and husband Ron opened their 1,000-square-foot “Santaville” cottage to benefit Hospice and Palliative Care of Cabarrus County.

“Out of 600 people here, we had only three families who were returning visitors,” Judy said Wednesday evening. “I give full credit to you all in the media, because so many people saw it through the Salisbury Post and WBTV. I was so happy to see so many new faces.”

Next year — she’s already thinking about that, mind you — she plans to reach out to Our State magazine and the Charlotte Observer. The more people who know about the Santa House, she reasons, the more money she can raise for hospice.

“I was just thrilled with the reception,” she said. “So many people were talking about how wonderful hospice was.”

When you have a personal connection to the organization, she said, you want to help. That was her experience. Both her parents received hospice care. It was especially meaningful for her. Although she is a nurse, she was simply able to be a daughter during her parents’ last days.

That’s why she opens the cottage each December.

This is her third year with the effort. The first year, she raised $1,500 through 500 local visitors and lots of $100 checks. Last year, she had bad weather two of the three Saturdays, and only raised $400.

This year, a combination of good weather and good publicity proved a winner.

If you didn’t get the chance to go and visit Judy, there’s still time.

“A lot of families are coming into town for New Year’s if they didn’t get to come for Christmas,” Judy said.

So if you’d like to include Judy in your visiting time, she’d love to see you.

“One switch turns on 100 outlets,” she notes. “If anybody wants to come by, all they have to do is give me a call. If you’re looking for something to do, come on over.”

“To see the looks on their faces was just priceless,” Judy said.

So was the care Judy received from hospice.

“There’s not enough money to repay them for what they did for me,” she said. “I’m just so thrilled to raise this money for hospice. They’re a special group of people.”

Ron and Judy Barnhardt live at 1288 Irish Potato Road. If you’d like to visit Santaville, give her a call at 980-521-0523 or email jmbarnhardt@carolina.rr.com.