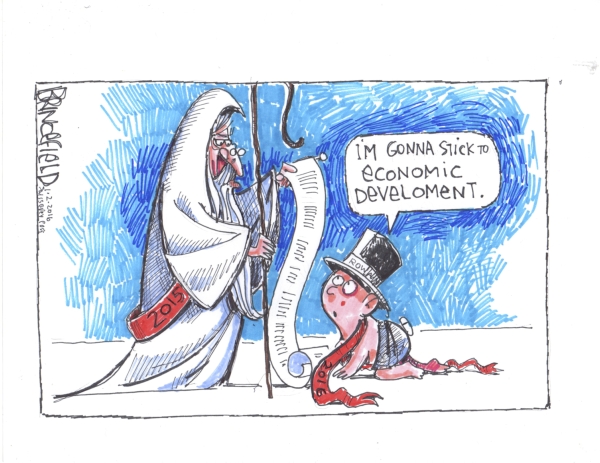 Resolved for 2016: To be as prosperous as Donald Trump, as philanthropic as Bill Gates, as self-sacrificing as Mother Teresa and as discerning as Judge Judy.

We in Rowan County may not deserve star billing, but we can strive for financial well-being, generosity and good judgment with the best of them. Here are some steps along the way:

• Participate in the political process. This could be the mother of all election years, with out-sized personalities like Trump and Hillary Clinton in the running. Stay informed, choose your issues and dig below the name-calling and emotions to discern who deserves your support. Use your head. “If it doesn’t make sense,” Judge Judy says, “it’s not true.”

• Volunteer to mentor or tutor a child.  The schools cannot counter the spike in child poverty alone; they need reinforcements if Rowan County youth are to get a good start. While the Gates Foundation gives hundreds of millions to reform education, you can donate something priceless: your time. One hour a week can make a big difference in the life of a child. Countless organizations call on volunteers to work with youth, including Communities in Schools, the Rowan Youth Services Bureau, Crosby Scholars, the YMCA and others. As Mother Teresa said, “The poverty of being unwanted, unloved and uncared for is the greatest poverty.” You can enrich a child’s life.

• Make technology work for you (not consume you). “Write the Great American tweet” appears on the Post’s online poll as a possible New Year’s resolution — a nod toward the pervasive force of social media and modern communication. Boycotting Facebook, Twitter and smart phone apps in favor of the simple life is an option, but it could also lead to isolation and missed opportunities. At least get a smart phone and take advantage of the efficiencies this technological leap has to offer. Time is money.

• Put yourself in others’ shoes. 2015 was the year it became impossible for white America to turn a blind eye to racism. Let’s be honest, though; denial runs deep. How do we advance the conversation that grew out of 2015’s tragedies? We can start by not just talking, but also listening and seeking to understand. More words of wisdom from Mother Teresa: “If we have no peace, it is because we have forgotten that we belong to each other.”

• Spend within your means. You’ll never get your name on a tower in Manhattan — or a paid-up mortgage in Rowan —  if you rack up credit card interest and late fees. “If you’re going to think anything, you might as well think big,” Trump says. That applies to setting personal goals, not piling up debt.