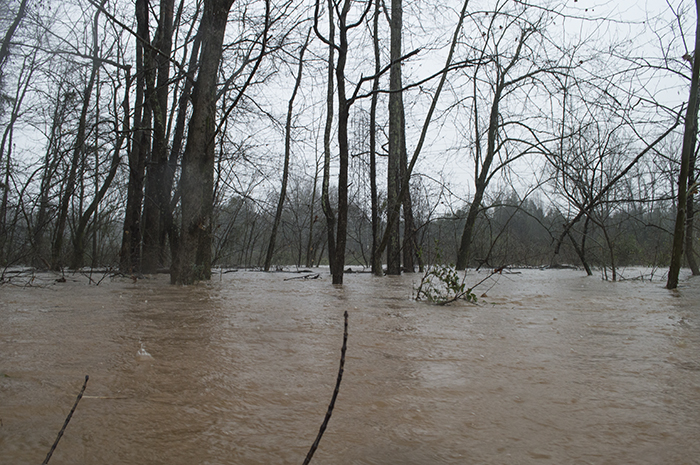 Josh Bergeron / Salisbury Post - Water spills over Church Creek, in an area near U.S. 52. The creek is located just south of East Rowan High. A deluge of recent rain has soaked Rowan County.

By Josh Bergeron and Shavonne Walker

Some areas of Rowan received more than 2 inches of rain in just a few hours on Wednesday. Regardless of rainfall totals, saturated soil was unable to soak up much of the precipitation.

It piled up on the roadside in some areas. In others, the water flowed over roads.

However, no roads had been closed because of flooding as of 4 p.m. Wednesday, according to Rowan County Telecommunications. A portion of Old Mocksville Road was closed because of a lighting strike that ruptured a gas line.

Fire crews responded Wednesday morning to the lightning strike that shut down power and water to a Mocksville Avenue home.

Parnell said after the lamp post was hit, lightning struck the ground.

He said what made the incident significant was the strike energized the ground, damaging the gas line, electrical system inside and outside the home, and the water supply to the home.

There was a gas leak outside the home, making the incident a first-alarm response.

The energy from the lightning damaged water pipes and the meter, Parnell said.

In addition to the city fire department, Ellis Cross Country and Spencer Fire departments were also dispatched to the incident but were not needed at the scene.

Piedmont Natural Gas, Salisbury-Rowan Utilities and Duke Energy were all called to the scene to assess the damage and shut off services to the home.

The flooding throughout Rowan County left a cow and her calf stranded, fire officials said.

Rowan County Animal Control, South Salisbury Fire Department, Rowan County Rescue Squad and the Granite Quarry-Faith Police Authority were among the agencies that helped get the animals to safety.

The Rescue Squad used its air boat to get to the animals in a pasture that was overtaken by water.

The calf went under water, but rescuers were able to get him to safety, Horne said.

Rescuers, the animals’ owner and a neighbor created a makeshift chute to get the cow into a waiting trailer.

Once the cow was rescued, a neighbor took both to higher ground, Horne said.

With Wednesday’s precipitation, rainfall totals for the previous seven days are more than 5 inches in parts of Rowan County, which is, expectedly, out of a moderate drought it suffered through during the summer.

Precipitation totals are either above average or at the normal rainfall numbers, according to National Weather Service figures. A flash flood warning remained in effect until 6:15 p.m. Wednesday, and a flood watch was in effect until 7 a.m. today.