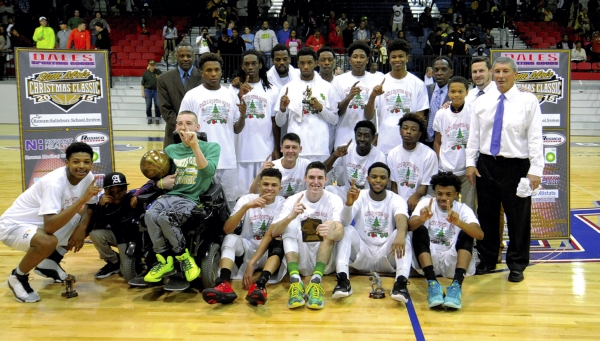 SALISBURY — It took North Rowan only a few minutes to get up to speed Wednesday night — and it never slowed down.

The Cavs played with their signature swagger, confidence and patience in the Dale’s/Sam Moir Christmas Classic boys championship game at Goodman Gym, where kings were crowned sporting green, yellow and white.

“When we smell blood, we like to attack,” tournament MVP Jalen Sanders said after North steamrolled upstart Mooresville, 82-71, for its ninth title, second in three years and third in the last five events. “That’s how we play.”

Second-seeded North (10-2) placed four scorers in double figures and made a cascade of 3-pointers — 10 in all — putting an end to Mooresville’s six-game winning streak.

“They just kept hitting big shots,” MHS coach Michael Micklow said after the fourth-seeded Blue Devils closed the calendar year with an 8-4 mark. “Every time we got close, they made a big three or got a big steal or made us turn it over. They were always one step ahead of us tonight.”

The victory was somewhat extraordinary for North coach Andrew Mitchell, a former tourney MVP for North Rowan who went on to play for Catawba in the 1980s. “I always like to win this tournament because Sam Moir is the one responsible for me being here right now,” Mitchell said in a pensive, post-game moment. “To do it on the Sam Moir Court in the Sam Moir Christmas tournament, there’s nothing more special than that.”

It was a similar storyline for Sanders and North teammate Josh Handy, seniors who turned their last waltz around the storied floor into a spotlight dance. Sanders pumped in 23 points, nine of them in the first quarter as North surged to a 24-16 advantage. Handy, who joined Sanders and Joe Scott on the all-tournament team,  stuck a trio of 3-balls including a second-quarter bank shot from the right side that gave North a lead it never relinquished.

“Our last go-around for this,” Sanders said with his boyish smile. “We knew we had to get it done — some how, some way. Everyone had the same goal, just to win.”

One more well-deserved shout-out went to North’s Henderson Lentz, the 6-foot-5 junior who stuck three long balls, finished with 11 points and took home the esteemed Ronz Award, presented for sportsmanship and courage. He suffered a heart attack on this same floor during a team camp last summer.

“All I wanted,” he said afterward, “was for us to come in here as a team and take care of business. The only way we were going to lose was if we beat ourselves.”

There was little chance of that after Mooresville’s T.J. Daniels opened the second half with a picturesque three from the right corner, drawing the Devils within 39-36. A team with back-to-back, come-from-behind triumphs this week, MHS seemed most comfortable in uncomfortable situations.

“I was almost thankful that happened,” Mitchell said. “We instantly had to adjust our attitude. There was a chance they could make another comeback, but the guys refocused and went on a nice little run.”

Scott agreed. “It woke us up,” he said. “We’ve got a habit of relaxing when we get a good lead. I knew the key would be to play our hearts out the rest of the way.”

Handy’s 3-pointer, Scott’s rebound and putback and Alonzo Sirleaf’s layup put North ahead by 10 just 49 seconds later. When Scott, who was no ordinary Joe this week (66 points in three games), converted a leaner down the lane, the Cavs led 71-55 with 4:36 to play.

“That man dominated,” said Handy. “Every game he puts his heart and soul into it. He should have won MVP.”

Let’s check with Sanders on that. “I actually thought Joe was going to win it,” he said. “Who was better?”

By the time the clock ticked to a close — and Mooresville had run out of Christmas magic — North huddled for team pictures and descended the stairs to its festive locker room.

“Whenever we get tired of winning this championship, it’ll be time for me to retire,” Mitchell concluded. “Every championship we win is special. We’re thankful for all of it.”

SALISBURY — North Rowan’s boys were such a human whirlwind in the first six minutes that it looked like Chuck... read more