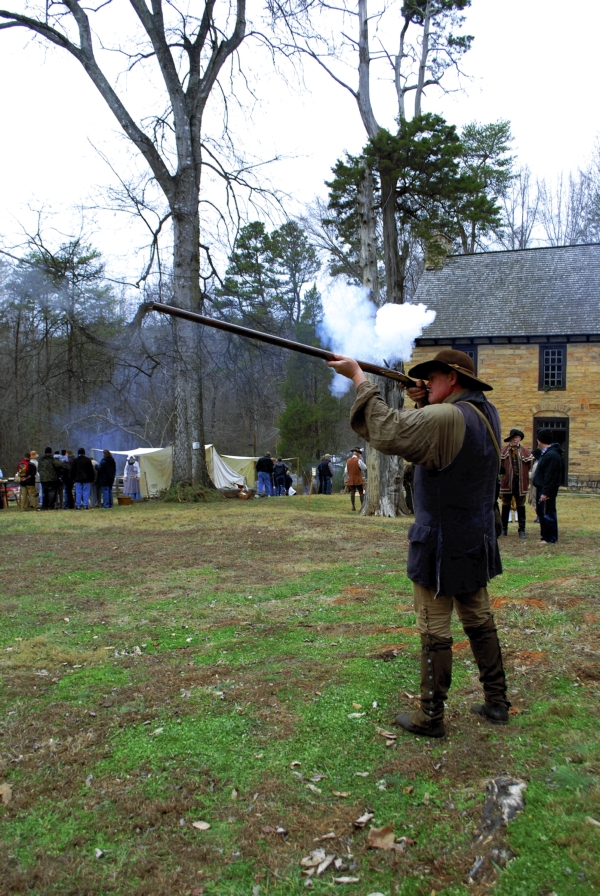 The Old Stone House will be decorated as it would have been during pre-Revolutionary days…very simply with natural greenery, dried flowers, herbs, fruits and berries.

Guides in period costumes will be on site, and guests will enjoy learning about customs and participating in crafts, musket firing, woodworking (benches, bowls and spoons), weaving, candle making, open fire cooking with lots of samples, music, children’s games, goats and chickens and much more. New to the event his year will be a weekend encampment of the First Regiment of the Mecklenburg Militia/Hopewell Company.

Holly sprigs will be available for all to toss into the fire to burn their troubles away for the year, looking forward to a new year.

Admission to the celebration is $5 for adults and $3 for students. For more information, call the Rowan Museum at 704-633-5946, or email rowanmuseum@fibrant.com.

The house is located one half mile down Old Stone House Road off Highway 52 in Granite Quarry in eastern Rowan County.

‘Breaking up Christmas’   An Appalachian tradition

GOLD HILL — For many families across Southern Appalachia the twelve days of Christmas end on Old Christmas (Jan. 6). The tradition of “Breaking Up Christmas” is a week-long celebration with gatherings of friends and families who meet in each other’s homes for all-night picking and jamming. Folks of all ages come together to enjoy the fellowship and share the music while winding down the holiday season.

The tradition began with celebrations rooted in Ireland, Scotland and all over the old world. In these original celebrations, a group of men would make surprise visits to the various homes, performing plays and festive music for small donations of money and gifts.

The tradition continues today, but just for the fun of sharing the music. Musicians from professionals right on down to novice players enjoy passing on the old time music tunes, ensuring that both will be carried on for generations to come. E.H. Montgomery General Store will host the event Friday evening, Jan. 1, from 4 until 9 p.m. Folks are invited to bring a finger food to share.

Entering their second decade as an ensemble, Chatham County Line brings a deep reverence for traditional American roots music and timeless bluegrass instrumentation to insightful, poetic original songs that are powerfully contemporary, yet rich with the complex resonance of their southern heritage. Over the course of six studio albums and performances around the world, they have pursued a singular style entirely their own, yet connects with audiences from all walks.

Dynamic and captivating, Chatham County Line is equally capable of classically hard-driving bluegrass and sparse, haunting ballads. The key to their sound lays in the close collaboration of the band’s four members: Dave Wilson (guitar), John Teer (mandolin, fiddle), Chandler Holt (banjo), and Greg Readling (bass). This partnership enriches their latest album, Tightrope (Yep Roc), which was forged over a year’s worth of intensive rehearsals where they put every element under the microscope.

“At the end of the day,” explains Wilson, “you want to write songs that have a reason for existing. For Tightrope, there was a lot of scrutinizing. We wanted every song to make the future Greatest Hits.”

In person, the band is a marvel of rugged soulfulness, veering from winningly loose to thrillingly tight. It’s readily apparent these four men share a profound friendship, and love what they do. “With this band,” Wilson says, “you can’t just rotate a guy out and replace him. It’s something larger than that. It’s a big train we’re riding on, and everybody’s enjoying the ride.”

Raoul Wallenberg: A hero for our time

Salisbury’s English Speaking Union will host Bernheim as its dinner speaker at 6:30 p.m. on Thursday, Jan. 14.

Salisbury’s own Rachel Oestreicher Bernheim will present a program about Raoul Wallenberg, the Swedish National who disappeared at the end of WWII.

Bernheim, a Salisbury native, is the chairperson and CEO of The Raoul Wallenberg Committee of the United States and has been part of the Committee since its founding in 1981.

She is an internationally known expert on the life of Raoul Wallenberg and has shared her expertise in settings as diverse as the US Congress, on military bases, in centers of worship, at universities, civic organizations, seniors centers, on television and radio, at correctional facilities and at educational conferences.

In addition, she has served as a consultant on books, films and documentaries about the life of Raoul Wallenberg.

Bernheim is listed in Foremost Women in the Twentieth Century and Who’s Who of American Women. She received The New Sweden ’88 Medal from the Swedish Consul General to New York. On March 13, 2007, Bernheim, by appointment of His Majesty King Carl XVI Gustaf, was awarded the Royal Swedish Order of the Polar Star at the level of Commander.

Dinner reservations are $32 each, to be held at the Country Club of Salisbury. You do not need to be a member to attend. RSVP to Gerry at 704-213-6008 and find more information at www.esuus.org

KANNAPOLIS — Local author Michael Eury will hold a book-signing for his new photo-history book “Legendary Locals of Cabarrus County,” a look at interesting personalities past and present from Kannapolis, Concord, Mt. Pleasant, Harrisburg and Midland.  Monday, Jan. 4 at 7 p.m.