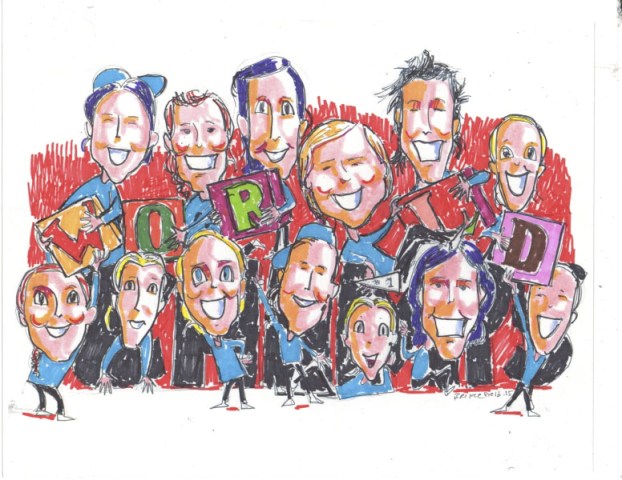 SALISBURY — Steve Yang says the 13 Rowan County Little League girls who brought a softball world championship back home from Oregon in 2015 will appreciate the magnitude of what they accomplished as they get older.

“Right now, they’re just 12- and 13-year-old girls having fun,” says Yang, the team’s head coach. “The parents and coaches are basking in the glory more than the kids. They just played like they had won another tournament.”

Some tournament. The Rowan team, made up of middle schoolers, fashioned a 5-1 record in Portland en route to becoming Little League World Champions.

For two consecutive nights in mid August, a multitude of television sets in Rowan County were tuned to ESPN to watch live broadcasts of the girls’ semifinal and championship games.

Even Gov. Pat McCrory was tweeting about the team and inviting the girls to the Executive Mansion.

In recognition of the girls’ accomplishment and the positive impact their victory had on the community, the Salisbury Post editorial staff has chosen the team as 2015 Newsmaker of the Year.

“We knew these girls were special,” says Dan Wales, president of Rowan County Little League. “I can’t put into words how great these girls played together. In the end, it was a total team effort.”

The Rowan County team is the newspaper’s 32nd Newsmaker of the Year. Only Elizabeth Hanford Dole has been chosen more than once.

Their coaches were Yang, Rob Hales and Eric Dowling.

Their only blemish was a 3-1 loss to Iowa about midway through the tournament.

They also showed class amid controversy and compassion on a world stage.

But as rewarding  as the team’s journey to the championship was, the real frenzy came once the girls and their coaches returned home.

A tour bus met the team at the Charlotte airport, and it received a sheriff’s escort from the county line to the old Salisbury Mall. Along the route, the players saw people waving to them from downtown streets, and a large throng of folks met the bus in the mall parking lot.

That was just the start. A downtown parade and sizable gathering at Salisbury Community Park celebrated the team two days later. It only set off a summer and fall filled with public appearances and recognitions.

Yang says the team has appeared in five different parades.

They also were honored at a joint meeting of the Rowan County Board of Commissioners and Salisbury City Council. The Rowan-Salisbury Board of Education celebrated the team at a reception.

Huge permanent posters of the team have been placed in the gymnasiums of Mooresville, Erwin, West Rowan, Southeast and Knox middle schools.

Road signs noting that Rowan County is home to the 2015 Little League softball world champions will be erected along the northbound and southbound lanes of Interstate 85.

The United Way campaign honored the team, and Yang has made several talks about the team at civic clubs. Restaurants and other establishments showered the girls with gifts.

It’s funny looking back now, Yang says, but at first he thought the Saturday parade to honor the girls right after their return wasn’t necessary. He wasn’t sure anybody would show up.

“Was I ever wrong,” he says. “No one expected it to have impacted Salisbury and Rowan County the way it has.”

Someone judged the girls’ nationally televised championship run as being worth $20 million in free advertising for Salisbury and Rowan County, Wales notes.

“It did place little Rowan County on the map,” he says.

In the end, the Rowan County Little League team proved to be overachievers who were battle-tested in the district, state and especially in the Southeast Regional tournaments on its way to Oregon.

“We never knew how good this group of girls was until we got away from this part of the country,” Wales says.

Going into the season, Wales, Yang and others thought 2016, not 2015, would be the year the Rowan Little League’s 11- and 12-year-old team would make waves. Eight of the 13 girls on the 2015 team had played for the previous year’s 9-10 age team, winners of a Southeast Regional tournament played in Tennessee.

“We knew when they got to be 12, they would be special,” Wales says. “(But) these girls were relentless. We didn’t expect this to happen this year. We expected it to happen next year.”

The team was bolstered by the addition of three players from Mooresville, including the pitcher-catcher combination of Morton and Mann.

Yang says after the team got past opponents from East Surry and Wilkes County on the way to winning a state title and opened up the regional by topping solid teams from South Carolina and Virginia, he thought the Rowan girls had a chance.

Yang told Hales the Rowan team probably was not the most talented in the regional, “but I think we can compete.”

Rowan beat Tennessee in the finals of the winners bracket, then in a winner-take-all Southeast Regional Championship game against the host team from Georgia, Warner-Robins, won 2-0.

Rowan scored early and kept Warner-Robins — a team Yang considered the best in the field — at bay. Hundreds of people were cheering for the home team, while mostly parents were in the stands for the Rowan girls.

“That was probably the most exciting game of the entire run all summer,” Yang says.  “… We went from a good team to a great team.”

Through no fault of its own, the Rowan team found itself in a bit of controversy during its game against Washington state. It was obvious the Washington team — the West Region’s representative — had purposely tried to lose its game against Rowan so Washington might have an easier route to the final.

The Washington coaches rested four of the team’s best starters and instructed all the players in the lineup to bunt the entire game, as Rowan won easily 8-0. Little League officials met afterward and decided Washington failed to play with the effort and spirit appropriate to Little League and ultimately found a way to  make the team face the schedule it was trying to avoid.

Meanwhile, the national television audience learned the Rowan County families attending the tournament had bought backpacks, plus team and individual photos for each of the players from Uganda, the first African team to play in this Little League World Series.

The Rowan County girls and their coaches met for a dinner last week at McCabe’s, where they received their world championship rings — something they’ll treasure even more as they grow older and look back on a magical season.

Yang, a Salisbury dentist, says so many Rowan Countians — people he knows and people who are complete strangers — still come up to him and talk about the team and what its accomplishment meant to them and the community in general.

“They don’t say ‘Congratulations,’ they say ‘Thank you,'” Yang says.

Salisbury woman experiences the storms of Alabama up close

By Mark Wineka mark.wineka@salisburypost.com SALISBURY — Pat Beck will go to great lengths to see her grandchildren. But Beck had no... read more