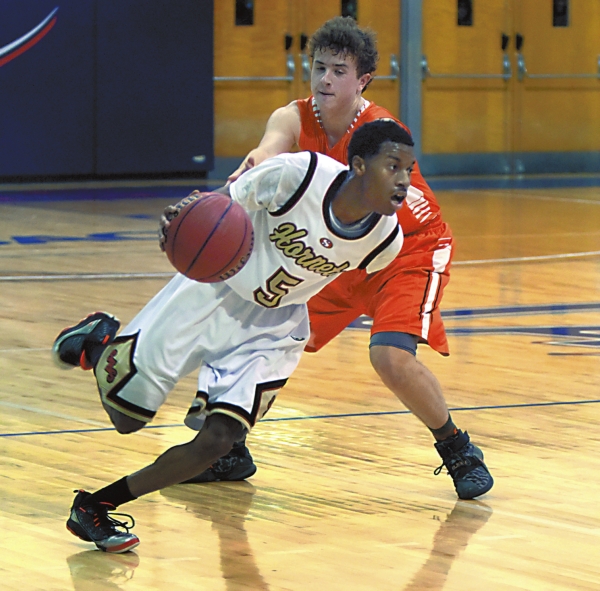 SALISBURY — Third-place games on the last day of a tournament are what they are.
Teams limp in dog-tired, drained, deflated and disappointed after tough losses, and that description fit both top-seeded Salisbury and third-seeded Davie on Wednesday at the Dale’s Sporting Goods/Sam Moir Christmas Classic.
Against all odds, it turned out to be heck of a game. Salisbury benefited greatly from a technical foul call in the last 30 seconds and beat the War Eagles, 78-70.
Cooper Wall scored 18 high-energy points to lead five War Eagles in double figures. DeShawn Troutman’s smooth 21 points paced Salisbury, as the senior guard pushed his career total to 997 points.
“A game like this, you really don’t know what you’re going to get,” Salisbury coach Bryan Withers said. “I looked at my team and I still couldn’t tell. Then the game started, and I saw we weren’t ready.”
Davie junior Cory Heiner scored 10 points faster than you can say, “Seriously, a 5-foot-11 post player?” and the War Eagles instantly led, 12-4.
Davie (8-5) is an interesting club, a 4A squad with limited height and average quickness, but a team that plays at a breakneck pace, like it’s the team with the superior talent.
“The thing about Davie is they always play very hard, they never give up, and you’d better not go out there playing sluggish against them,” Withers said.
Withers used timeouts to remind the Hornets (11-2) how hard they needed to play. They responded. Troutman and Isaac Baker nailed unguardable shots. The Hornets also used their height advantage.
“Salisbury was really tough for us to handle inside, especially when 23 and 0 (D.J. Alexander and Tre Oats) were both in there,” Davie coach Mike Absher said. “And we couldn’t stay in front of 5 (Troutman) at all. We made a good adjustment to a 1-3-1. We got enough stops to give ourselves a chance.”
Salisbury caught up early in the second quarter and the Hornets got 3-pointers from Alex Yang and Will Leckonby to surge to a 47-38 halftime lead.
Davie point guard Nic Starnes, critical to their running game, took a hard spill in the second quarter, but he stayed in, playing with a badly bruised tailbone.
When Troutman drilled a 3-pointer early in the third quarter, Salisbury led by 11, but Withers still wasn’t comfortable. He’d watched Davie make two furious runs at North Rowan in the semifinals, and he knew the War Eagles would make at least one more charge.
That charge came. A Heath Slabach 3-pointer lifted Davie to a 61-56 deficit late in the third quarter, and the War Eagles kept coming.
Salisbury got key buckets from Wes Fazia to keep the lead, but when Starnes made two free throws with 1:12 remaining, the Hornets’ advantage was down to 71-70. That put the pressure on the top-seeded Hornets not to go 1-2 in the tournament.
A Troutman free throw with 45 seconds left nudged Salisbury’s lead to 72-70.
Then Starnes missed a jumper that could’ve tied it. When a Davie foul was called on the fight for the rebound, the game got away from the War Eagles in a hurry. Freshman Michael Walton was assessed a technical foul for his reaction to the whistle. Alexander hit two free throws for the personal. Then Leckonby made one of two technical tosses.
Now the Hornets led by five and then they got the ball out of bounds. Another Troutman free throw with 23 seconds left made it a 76-70 lead, and Salisbury was headed to victory.
Absher took the high road on the game-deciding technical.
“You’d always like to be able to play it out,” he said diplomatically. “The bottom line is we gave up 78 points, and that’s just too many to give up. Still, it was a great tournament for us. We played three excellent basketball teams, and we got better.”
Withers was pleased with the win and happy that his team answered a challenge on a night when it could’ve stayed down in the dumps.
“Last night we missed 18 free throws and we lost at the buzzer, but we came back and played through some adversity and we won,” Withers said. “Davie is good. If I can get my team to pass the ball like Davie does, then you’ll see a coach with a big smile on his face.”