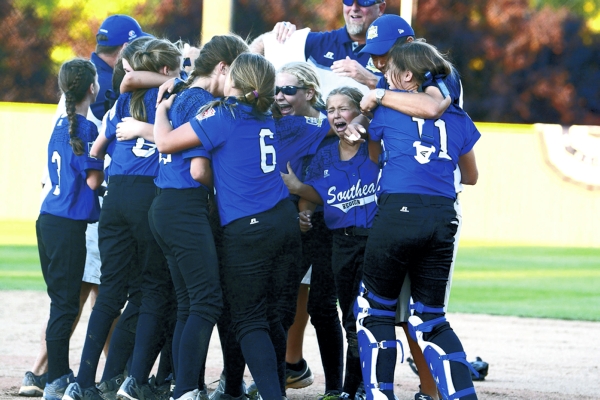 Cheers don’t typically follow wailing police sirens, but on this August night it was the only appropriate action for a crowd of people gathered at the West End Plaza.

When police lights came into view, the crowd rushed from the parking lot to the street. Members of the crowd hoisted homemade, congratulatory signs as a tour bus pulled into the parking lot. Bearing huge grins, members of the Rowan Little League softball team exited the bus. They were quickly mobbed by hugs from friends and family members.

The champs were home.

Hours earlier, first baseman Kary Hales snagged a line drive to make the 4-2 score final. The team had just beaten East regional champ Rhode Island. The 13 girls from Rowan and Iredell counties had coasted through the Little League World Series, outscoring opponents by a 43-6 margin. During its run, Rowan Little League was thrust into a national controversy over whether their opponent in a pool play game intentionally lost. Even then, Rowan effortlessly handed their opponent an 8-0 loss.

After the championship, coach Steve Yang credited the team and its assistant coaches.

“They’re the best team in the whole world,” Yang told the Salisbury Post after the victory. “Not many people will ever be able to say something like that, but 13 very special girls from Rowan and Iredell counties can say it.”

The editorial staff of the Salisbury Post voted the team’s stellar run to the world championship the top local story of 2014. Here are the other stories that made the top 10:

For decades, residents of the rural community near Buck Steam Station — Dukeville — were unaware of the potential drinking water hazards associated with the coal-fired steam plant nearby.

Coal ash concerns didn’t start in 2015, but state government this year officially declared well water in the Dukeville community unsafe for human consumption. More than 90 percent of the houses in the community were suddenly without safe water to drink or cook with because of heavy metals that popped up in test results.

Duke Energy has delivered water to the families with contaminated wells but challenged whether the unsafe drinking water is tied to the millions of tons of ash stored in ponds used to hold the waste. State government was equally as cautious about directly tying the contaminated water to Duke Energy’s operations. Both parties have publicly pondered whether the contamination is tied to naturally occurring elements.

A bill passed in the state legislature — The Coal Ash Management Act of 2014 — laid out dozens of requirements for Duke Energy as it examined coal ash storage facilities. Dates included in the bill, however, mean the coal ash saga is far from over. Dukeville residents know their water isn’t safe but haven’t been told how Duke or state government plans to deal with potential coal ash contamination.

Rowan residents have watched as communities in other areas of the state receive news that coal ash will be excavated and removed. At Buck Steam Station, it’s unclear what might happen to the waste.

Before the end of 2015, state government is required to release its priority rankings for coal ash. An internal document leaked this month puts Buck Steam Station among the highest priority sites. If the final rankings mirror draft documents, Dukeville would see the coal ash ponds excavated and the stored waste moved to a lined landfill.

When a racially charged summer shooting in Charleston, S.C. tragically took nine lives, it prompted a nationwide discussion about the modern-day connotations of confederate flags and symbols in American society.

The debate quickly flowed into Rowan, where residents questioned a monument — known as Fame — in downtown Salisbury. In South Carolina, discussions focused on whether Confederate flags should be removed from public property. In other parts of the South, including Rowan, Confederate monuments were questioned.

Later that day, another group gathered several blocks away with signs reading “black power” and “wake up.” The second group, and many others, countered the Confederate flag and other symbols represent a hate-filled past.

The Salisbury City Council held a hearing on the matter in July, when a standing-room-only crowd talked about the symbolism of Salisbury’s 1909 Confederate monument.

As the year wore on, controversy about Confederate symbols steadily died down. The statue — dedicated to the 2,500 local soldiers who fought for the Confederacy — still stands.

Collins, 46, had served as police chief since 2010. In an email to his staff, Collins said he made the decision to retire on his own.

“I simply feel the time is right to begin that next chapter of my life,” he wrote in the email.

Stress associated with the job was a motivating factor in his retirement, according to emails.

Since becoming chief, Collins had faced criticism for his handling of violent crime, especially in Salisbury’s West End Community. He reorganized the police department multiple times, but Salisbury continued to be plagued by gun violence. Several murders remain unsolved.

Capt. Brian Stallings was named interim police chief. Collins, however, will serve in an advisory role and continue drawing a paycheck until mid-2016.

For several consecutive September nights, Salisbury Police responded to shootings across the city. More than one occurred near Salisbury High School. Police connected the incidents to gang violence.

When Sheriff Kevin Auten and Collins announced the partnership, they noted it was to “battle criminal activity that plagues the community and causes its citizens to live in fear.”

By late October, the two agencies reported that violence had settled down. Police, however, continued to be stonewalled by witnesses and family members. No one would talk.

A federal judge issued the sentence in March. Judge Thomas Schroeder said tax and mail fraud helped Sandy and Casey cover up abuse and keep suspicions at bay because they were still receiving benefits for Erica, who hasn’t been seen in Rowan County since November 2011.

Sandy and Casey received government-funded adoption assistance, Medicaid, Social Security, and Food and Nutrition Services benefits for Erica after she ceased to live with them, and used the mail to commit the fraud.

The Rowan-Salisbury School System in 2014 implemented changes focusing heavily on technology in the classroom. One year later, the state’s performance grades ranked Rowan’s school system worse than before.

Superintendent Dr. Lynn Moody said the rankings were disappointing but not discouraging. Instead, the increased number of Ds and Fs represented an “implementation dip,” Moody said. Teachers were learning how to deliver daily lessons to students using new technology.

School board members have publicly pondered whether the technology change will work. Moody says the system has to follow through on its commitment.

“We are working hard at staying the course in changing our teaching and learning environments, because we know this is what is best for our students,” Moody said after rankings were released.

8) With eyes on revitalization, City of Kannapolis buys its downtown

With an $8.75 million purchase, the City of Kannapolis in June bought a large swath of its city. The city’s intent is to revitalize its downtown.

A number of ideas have been considered for the downtown property, including a baseball stadium. A mixed-use area with shops and apartments has also been discussed.

The council voted this year to proceed with phase 2 of a planning study to determine whether to locate a baseball stadium in downtown Kannapolis.

The City of Kannapolis hasn’t yet started any construction associated with redevelopment.

Even with a new majority, the Rowan County Board of Commissioners decided to stick with the county’s defense against a lawsuit challenging pre-meeting prayer practices.

In November 2014, Rowan elected three fresh faces — Greg Edds, Jim Greene and Judy Klusman — to the county Board of Commissioners. A few months later, the group faced a major decision after a federal judge ruled commissioners violated the U.S. Constitution with prayer before meetings.

Before a formal vote, commissioners Mike Caskey and Craig Pierce, who were elected before the lawsuit started, publicly stated their support for an appeal. The newest commissioners erased any doubt about whether they’d accept the ruling when they joined Pierce and Caskey, unanimously voting to appeal the suit.

The lawsuit now sits in the U.S. Fourth Circuit Court of Appeals. Oral arguments in the case are scheduled for Jan. 27 in Richmond, Va.

The original focus of the lawsuit — brought by three Rowan residents and the ACLU — was sectarian content in prayers. A U.S. Supreme Court ruling in 2014 contributed to the case shifting toward the identity of a prayer giver.

10) School system finally gets started on its central office

After more than two decades of discussion, the Rowan-Salisbury School System this year finally started on its new administrative home.

Other locations were considered for the building, but it’s final resting spot is on North Main Street in downtown Salisbury. It’s called the Wallace Educational Forum.

The largest single portion of money for the project comes from a multi-million-dollar loan. A number of private donors and the City of Salisbury also contributed money. Even after construction started, the school system still needed money to pay for a dome that had already been incorporated into the design. The Wallace family donated money for the building’s dome.

Dome excluded, the exterior of the building appears complete.

School system officials have said they hope to move into the new central office in early 2016.