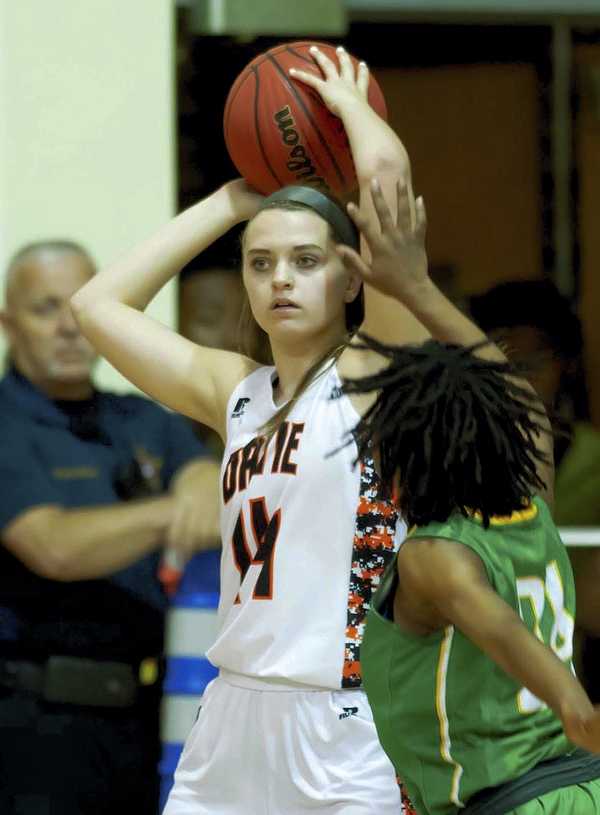 SALISBURY — Davie County freshman Emma Slabach put some tears in old-timer’s eyes and put a lot of balls in the baskets at Goodman Gym.
Slabach’s late mother, Angie Browder Slabach, led Davie to the Christmas tournament championship in the same gym in 1983. Davie, coached by the late Bill Peeler, roared through the field that year, beating South Rowan, West Rowan, and then Salisbury. Emma’s mother scored 18 points in the final against the Hornets to earn the MVP award. Emma scored 18 on Wednesday as Davie rallied to beat Mooresville, 48-33, for fifth place in the Dale’s Sporting Goods/Sam Moir Christmas Classic.
Angie Browder Slabach died from cancer in 2013 at age 46. She was a great track athlete, a great volleyball player and a great point guard for Davie, and she returned after her college career at High Point to teach and coach at Davie.
Emma is the youngest of Gary and Angie’s four children. Like her brother, Heath, a junior on Davie’s boys team, she can really shoot. She scored 12 points in a third-quarter flurry to sink Mooresville.
“She was the difference in the game,” Mooresville coach Andy Sparks said. “We were trying to take away their two scorers (guard Madison Zaferatos and post Ashlyn Hampton) with a triangle-and-two, but No. 14 was making shots. Maybe it was bad coaching. We kept losing her and they kept finding her.”
Actually, it was good coaching. Stop Zaferatos and Hampton and you usually stifle the War Eagles. That just wasn’t the case this time.
“Coach (Dave Ruemenapp) keeps asking me if I think I’m a good shooter or not and he wants me to keep shooting,” Slabach said. “It’s mostly a matter of building up my confidence. Walking in here today, I felt confident and I felt really focused. Everything felt right.”
Slabach has had a typical year for a varsity freshman. There have been good days and bad days. She had her career high on Wednesday.
“She really needed a game like this and we needed her to have a game like this,” Ruemenapp said. “It’s been a grind in our league for all of us, and we’ve played a difficult schedule. But Emma can score. It was great to see her get it going today.”
Fifth-seeded Davie (8-6) was sleep-walking in the first half and trailed, 20-13, late in the second quarter. The War Eagles finally got a spark in the final seconds of the half. Zaferatos hit a 3-pointer. Then Hampton, a 6-foot junior committed to Campbell, made a layup that beat the horn.
Seventh-seeded Mooresville (4-8) had competed much harder than Davie in the first half, but had only a 20-18 lead to show for it.
“Mooresville gave us all we wanted in the first half,” Ruemenapp said. “It was a hard game to get up for. This game obviously was not the one we wanted to be playing in today, and we were showing our disappointment. In the second half, we did a much better job of coming to work.”
Slabach had only three points in the first half, but she scored in the opening seconds of the second half. Then she started scoring from all over.
Her 3-pointer broke a tie and gave the War Eagles a 25-22 lead. She scored again for 27-22. Then Davie had its best offensive possession of the day. Zaferatos passed diagonally to Hampton at the high post. Hampton whipped the ball out immediately to Slabach for an open, right-wing 3-pointer, and Slabach drilled it. Davie led, 30-22, and was headed for a victory.
“What we talked about at halftime was that we were losing to a team we really shouldn’t be losing to, and Coach asked us if that was who we really were,” Slabach said. “We did what we were supposed to do in the second half.”
Davie was 2-1 in the tournament, losing by 49-44 to North Rowan on opening day.
Seventh-seeded Mooresville won once in the tournament, topping Salisbury in a second-day consolation, and has a bright future. It’s a very young team. Freshman Alecsai Allen led the Blue Devils with 11 points, and sophomore Taylor Cullen and junior Sehrena Hull had some nice moments.
“We’ve got young players with promise,” Sparks said. “This tournament will help us prepare for our conference.”